AppleInsider
Posted: November 2, 2019 3:03PM
in General Discussion edited December 2019
Figures for television and online advertising show Apple typically spending around half as much on promoting Apple TV+ as on the iPhone. 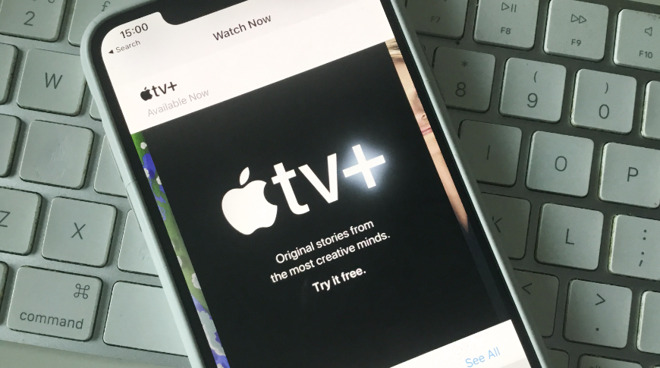 According to the New York Times, Apple's marketing of Apple TV+ has been "muted" compared to how Disney+ is being promoted. While there are no details for Disney's spending, on figures available for September and October, Apple spent around twice as much advertising the iPhone than it did Apple TV+.

As might be expected, that figure went up in October as the service's November 1 launch date approached, but the proportions were approximately the same. In October, Apple spent $19.9 million advertising Apple TV+ on television, but it spent $38.6 million on iPhone adds.

The figures are closer for online ad spending and in September, Apple TV+ promotions actually cost more. Apple paid an estimated $3.8 million for online Apple TV+ ads, compared to $2.4 million for iPhone ones.

However, in October, online iPhone ads cost Apple $2.3 million, while it is believed to have spent $1.7 million on Apple TV+ ones.

The New York Times quotes analyst Dan Rayburn of business consulting firm Frost & Sullivan, saying that Apple is right to hold back on its advertising.

"Consumers are just drowning in content right now," he told the Times, "and all of these services are competing for our time. But they're all approaching the market differently. This isn't some race for Apple. It's a slow roll."

However, analyst Daniel Ives of Wedbush Securities told the NYT that he believes the Apple TV+ marketing has been unusually "aggressive" for Apple.

"This is a pivotal juncture for Apple to be successful," he said. "They cannot trip over their shoelace. They were late to the game, they've underinvested in content, and they have a lot of room to make up."

The New York Times report was first spotted by 9to5mac.
«12»