AppleInsider
Posted: November 12, 2019 2:06PM
in Future Apple Hardware edited November 2019
An Apple-produced car under 'Project Titan' could include an lighting system that keeps the light inside the vehicle as even as possible throughout a journey, such as changes by cloud movements and traveling through a tunnel, by borrowing the core concept of the iPad Pro's TrueTone technology. 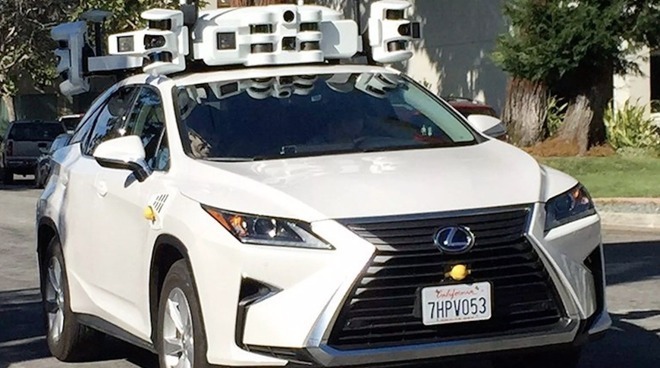 A self-driving Lexus fitted with an early Apple testbed, though to be part of 'Project Titan'

In situations where a person is indoors near large windows, or in a vehicle surrounded by windows, their immediate surroundings are usually bathed in natural light from the sun during the daytime. While this may be preferable to using artificially-generated light most of the time, there are external factors that could change how the light appears.

Aside from the passage of time where the sun rises and sets, the movement of clouds in the sky can shade the sun, dimming light temporarily. For vehicles, a more extreme version is endured when passing through tunnels or going past buildings and other structures that can block the passage of light.

In both cases, the changes in light viewed by a person can be unwanted. While this can be mitigated to a degree using internal lighting, lamps typically do not alter what they output, so changes in overall lighting are still felt.

In a patent granted by the US Patent and Trademark Office on Tuesday for "Adjustable lighting systems," Apple intends to solve the problem using ideas borrowed from TrueTone, a system used by Apple to keep the display of the iPad Pro and other products have the same appearance to the user despite changes in environmental lighting.

In the filing, Apple suggests the use of internal sensors within an Apple car's enclosure to sense an internal light condition and generate a signal based on that status. It is suggested this could be a camera which collects data from an image, comparing what it receives against known values for the image to determine differences in lighting.

This data is then fed to a lighting controller and control components to adjust the lighting, in a bid to bring the data gleamed from the camera sensor closer to the preconfigured values. 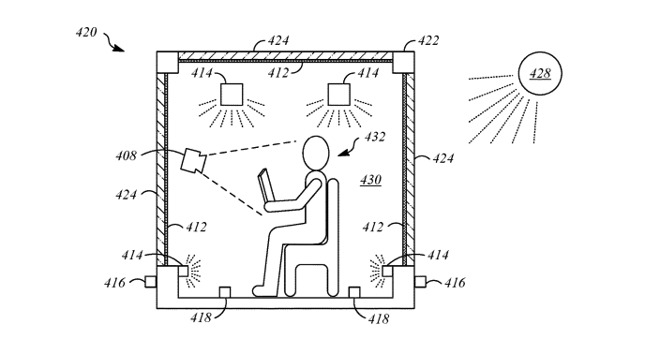 This is somewhat similar in concept to TrueTone, where sensors detect the color and intensity of light in the environment near the display. Using the data from the sensors, the TrueTone system then adjusts the colors of the display relative to the environmental light so that, to the user, the display is showing the same image regardless of environment. TrueTone is intended to prevent the effect for non-changing displays where screens can appear warmer or cooler with changes in the environment.

Apple files numerous patent applications on a weekly basis, but while the existence of a patent advises areas of interest for the company's research and development efforts, it doesn't guarantee it will be used in a future product or service.

While the patent filing does not mention or illustrate vehicles at all, it appears the patent is intended for use with an Apple-designed car, rather than in a home as described. A search for details of its co-inventors brings up many elements directly relating to vehicle design and systems, which strongly suggests this too can be applied in that field.

Credited to the patent is Budhadipta Dan, whose LinkedIn reveals he is an engineering program manager for Apple's Special Projects Group. He is also shown to have experience with "robotics, autonomous systems," and other related fields that would assist in self-driving vehicle development, previously reported on as part of Apple's "Project Titan" effort.

Another inventor, Clarisse Mazuir, is named on a patent for a "Solar invariant imaging system for object detection," again useful for self-driving vehicle systems. David E Kingman also appears on a patent for "Extendable bumpers for vehicles."

"Project Titan" was initially thought to be about designing an Apple-branded car, but it is believed Apple has pivoted the effort towards autonomous vehicles. Apple operates a fleet of vehicles as part of its development of self-driving systems, which could be potentially incorporated into its own vehicle or in one developed in partnership with an established automaker.

Despite being seemingly more about self-driving systems based on publicly-available evidence, Apple is still looking into redesigning different elements of the car, at least based on patent filings. Such design ideas include light-up car seats, car hinges with force feedback, wide-opening doors, and ways to limit motion sickness.

Other movements also hint at Apple making a bigger push in its automotive efforts, including the reported hiring of former Tesla engineering VP Steve MacManus in July. In May, it was claimed Apple was constructing large drive rooms for continued testing and development of advanced battery technology, which could be used in electric vehicles.
«12»