AppleInsider
Posted: November 13, 2019 3:31PM
in Current Mac Hardware edited June 2020
Apple has just launched the 16-inch MacBook Pro, one that replaces the 15-inch version of the popular notebook line. AppleInsider pitches the specifications of each against each other to see how much of a difference there is between the two models, aside from screen size. 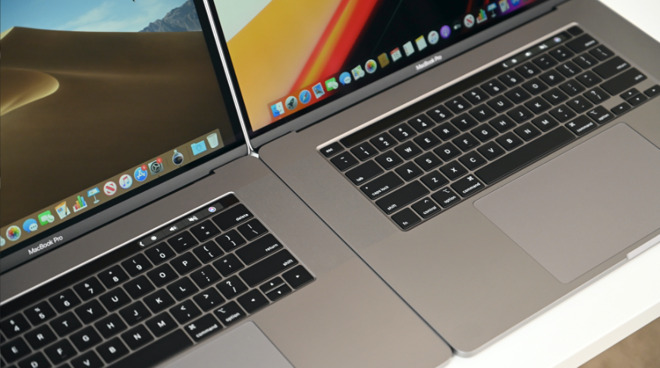 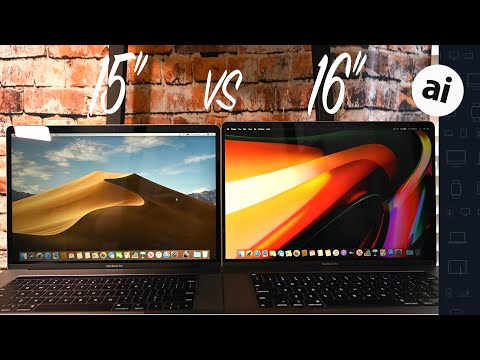 On the face of it, the model is still definitely a MacBook Pro in terms of style and usage, but with some tweaks in both its appearance and its specifications.

From a distance, observers can easily determine the two are MacBooks, as they continue to share Apple's long-established design language. The similarity in design does mean it is hard to tell whether the version being held is the 15-inch or 16-inch variant at a glance, as an extra inch of diagonal screen size does impact the enclosure's design, but it is only noticeable at the diagonal. 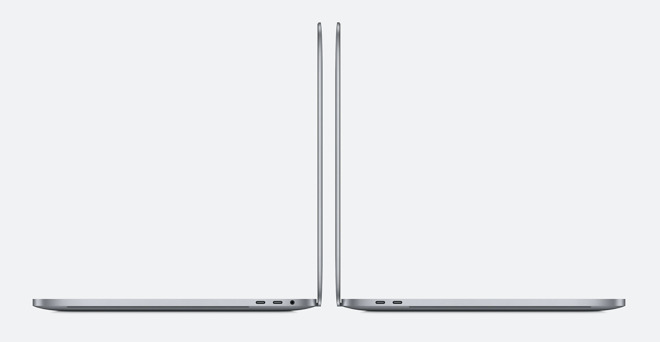 You're also carrying around more weight if you have the 16-inch model, with it being 4.3 pounds compared to the 4.02 pounds of its predecessor.

The biggest differentiator between the two models is the screen size itself, with the 15-inch model having a 15.4-inch display while the 16-inch has a 16-inch screen. To accommodate the extra screen estate while minimizing increases in dimensions, Apple has elected to thin the bezels on the side of the display, with the 16-inch MacBook Pro having much thinner bands to the sides.

Apple is continuing to use an LED-backlit IPS display, which kicks out the same 500 nits of brightness as the 15-inch's 500 nits. Wide color (P3) and TrueTone are also present on both models.

The most recent update to the 15-inch MacBook Pro brought with it Intel's Coffee Lake processors, with the model starting from a 2.6GHz 6-core Core i7 with a turbo boost of 4.5Ghz, while at the top end is the 2.4Ghz 8-core Core i9, which can be boosted to 5GHz.

While this seems to be largely similar to the 15-inch, the processors in the 16-inch are 9th-generation versions, which generally offer better performance. 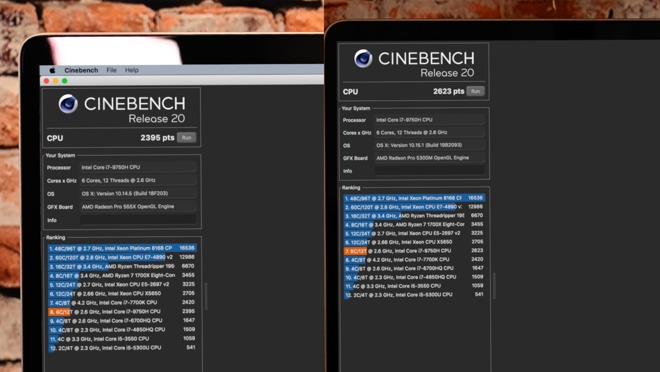 Graphics options have also been updated from the 15-inch's use of the Radeon Pro 555X, 560X, Vega 16 and Vega 20, all equipped with 4GB of memory, along with integrated Intel UHD Graphics 630. While the integrated graphics are the same, the 16-inch includes Radeon Pro 5300M and 5500M GPUs with 4GB of GDDR6 memory as standard, configurable to the 5500M with 8GB of GDDR6.

The new GPUs certainly help raise the performance in benchmarks, with a run-through of CineBench on the 15-inch and 16-inch MacBook Pro with identical Core i7-9750H processors but with different GPUs, the former having the Radeon Pro 555X and the latter the Radeon Pro 5300M, giving respective scores of 2,395 points and 2,623 points.

A bone of contention for many MacBook Pro users, due to reliability issues, Apple has switched the keyboard yet again for the 16-inch model, for a new Magic Keyboard with an updated scissor mechanism that provides 1mm of key travel, rather than the previous butterfly version. The use of a rubber dome is claimed to store more potential energy for a more responsive key press. 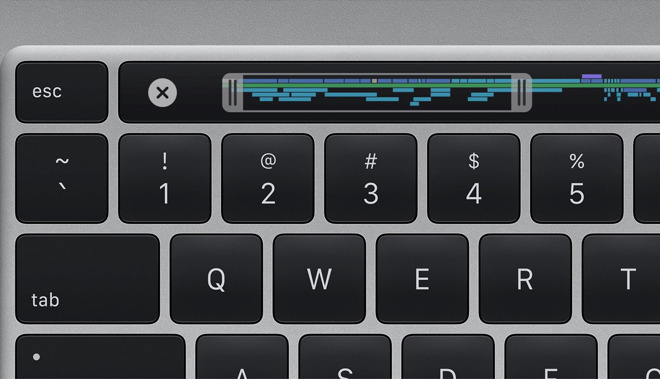 An "Inverted T" arrangement has also been included but in a slightly unexpected configuration. Previously the four arrows took up the space of three full-size keys, with full-size left and right arrows and half-height up and down versions. 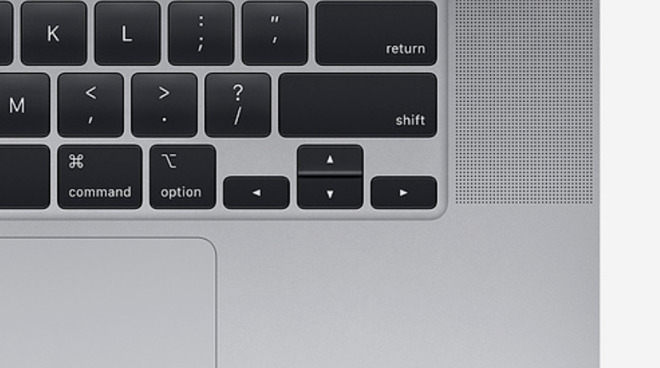 In the new arrangement, all four keys are half-height, but with added space above the left and right keys to more distinctly mark out the region where the arrow keys are located. This should make it easier to press the keys while minimizing accidental fumbles with the shift key above.

The audio has been given an overhaul in the new model, with the stereo speakers in the 15-inch switched out for a six-speaker system with force-canceling woofers and support for Dolby Atmos. This should provide a far better audio experience for users, short of connecting their AirPods Pro up to the MacBook Pro (see our AirPods Pro Review).

While there are still three microphones, this time they consist of a "studio-quality three-mic array" with high signal-to-noise and directional beamforming, which in theory result in clearer audio recordings with less unwanted background noise.

Battery life is up in the new model, raising the 10 hours of wireless web surfing in the 15-inch to 11 hours while maintaining 30 days of standby time. The 83.6-watt-hour battery has been exchanged for a 100-watt-hour version. Lastly, the 87-Watt USB-C power adapter is now a 96-Watt USB-C adapter.

The updates Apple has made to the 16-inch MacBook Pro goes far beyond a simple display increase. Even though the size is barely half an inch larger on the diagonal, the extra spare is almost certainly going to be welcomed by users. So too will the higher resolution.

More importantly, Apple has done so with a relatively minimal increase in its footprint and thickness. The weight is a fair bit of an increase, but not that much realistically speaking. 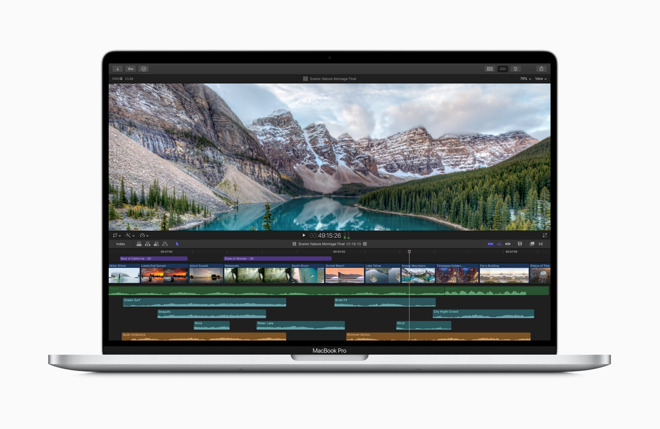 The refreshed specifications for the processor and memory, including higher capacity options for both memory and storage, are also likely to make the new model a draw for power users. For typists keen to get away from the butterfly mechanism, they now have a portable option, complete with an extra Escape key.

The increases continue with more battery life and a more powerful charger to match, and significantly raising the number of speakers from two to six.

For those who wanted to get a 15-inch MacBook Pro, the 16-inch offers far more comforts, and at the same starting price point, in a package that's very close to its predecessor in physical size.

Find the best deal on a MacBook Pro

Apple resellers are accepting orders for the new 16-inch MacBook Pro with a variety of incentives. Expercom is knocking up to $438 off select new configurations with coupon code appleinsider, while Adorama is taking up to $250 off retail models with promo code APINSIDER (prices start at just $2,199 with code). Details can be found in this 16-inch MacBook Pro deal roundup.

Meanwhile, at B&H, shoppers can save $100 on the retail systems and select between no interest financing when paid in full within 12 months with the B&H Financing Card or a sales tax refund in eligible states with its Payboo Credit Card. The latter can save many shoppers anywhere from $200 to $500 on average.

Amazon is also offering instant discounts on the 16-inch MacBook Pro, matching B&H with prices as low as $2,299.