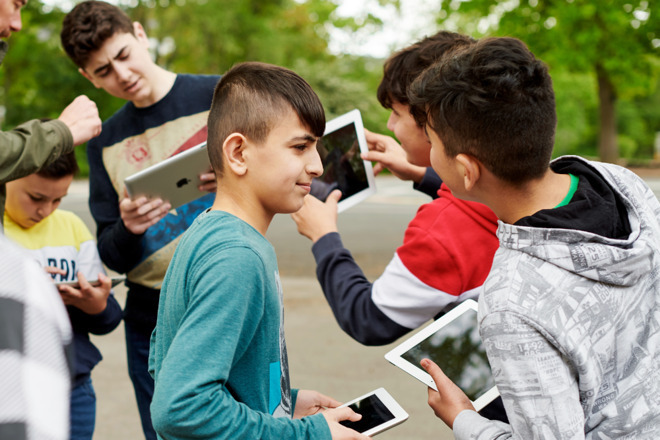 Germany's Wilhelm Ferdinand School, where every student gets an iPad. | Source: Apple

Schiller was asked about Chromebook's growth in education as part of an interview with CNET covering Apple's new 16-inch MacBook Pro, which launched earlier today.

The executive, who noted colleges are "dominated" by MacBooks, was asked to offer perspective on Chromebook's rapid adoption in education. He initially deflected, saying iPad is "doing really well" in the K-12 market, before lashing out at the inexpensive hardware family.

"Kids who are really into learning and want to learn will have better success. It's not hard to understand why kids aren't engaged in a classroom without applying technology in a way that inspires them. You need to have these cutting-edge learning tools to help kids really achieve their best results," Schiller said. "Yet Chromebooks don't do that. Chromebooks have gotten to the classroom because, frankly, they're cheap testing tools for required testing. If all you want to do is test kids, well, maybe a cheap notebook will do that. But they're not going to succeed."

The derogatory "test machine" reference has been floated by other Apple execs, including CEO Tim Cook in 2015.

Over the past few years, schools across the U.S. have moved to an assessment-driven curriculum. Facing a shift in priorities and mounting budgetary concerns, many institutions began to question the value of a Mac or iPad, while others simply could not buy a tablet as mandated tests require keyboards.

Apple conducted study "many many years ago" that found student engagement was intrinsically tied to academic success, Schiller said, the conceit being technology baked into iPad and Mac is better suited for the classroom than what is on offer from "cheap" Chromebook hardware.

The comments drew swift criticism, which Schiller attempted to allay in a tweet.

"Every child has the ability to succeed -- helping them to do that has always been our mission," he said. "In the full conversation with CNET, we discussed giving kids and teachers the content, curriculum and tools they need to learn, explore and grow. Not just to take a test."

Education was once a stronghold for the iPhone maker, but the company's lead in the segment, previously spearheaded by Mac, has been quickly eroded by encroaching newcomers.

In a bid to bolster a weakening stance in the sector, Apple has since revamped its education strategy to focus on iPad and specialized mass distribution software. The company has transitioned to a mobile-first strategy under the iPad in education initiative, providing schools a more affordable path to hardware purchasing and management.
«12»