AppleInsider
Posted: December 2, 2019 5:39PM
in General Discussion
Apple CEO Tim Cook, along with over 70 other chief executives, has signed a letter asking the U.S. to continue to adhere to the standards and goals set forth by the Paris Agreement. 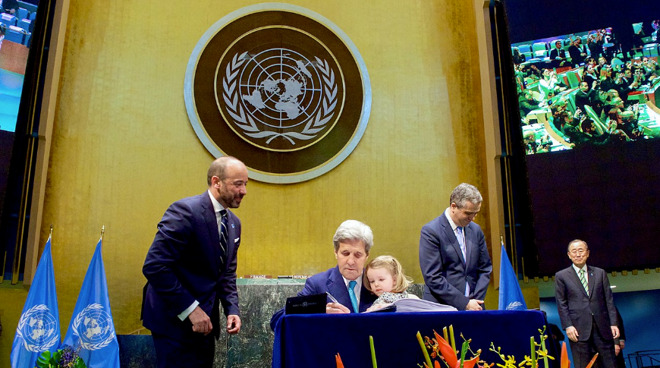 The letter, which was written by Stuart Applebaum, the Executive Council & Chair of International Committee, AFL-CIO, addresses the seriousness of climate change globally. Specifically, the letter talks about the impacts of climbing global temperatures on the U.S. economy.

We the undersigned are a group of CEOs who employ more than 2 million people in the United States and union leaders who represent 12.5 million workers. Together, we know that driving progress on addressing climate change is what's best for the economic health, jobs, and competitiveness of our companies and our country.

In 2017, many of us came together to rally behind the US' participation in the Paris Agreement. We came together to say we are still in. Two years ago, the impacts of climbing global temperatures were clear. Today, with record temperatures across the country, fiercer hurricanes pummeling coasts, more destructive wildfires, droughts and flooding disrupting the economy, we have no time to waste.

It highlights the importance of upholding environmental standards while respecting workers' labor rights and companies' abilities to choose their own path to meet emission reduction goals.

The letter goes on to request that the U.S. make an effort to remain in the Paris Agreement, rather than attempt the withdrawal that President Trump had announced in 2017.

It was unsurprising to find that Tim Cook had signed the letter-- after all, Apple has begun to set itself apart in the realm of sustainability.

In the Spring of 2018, Apple had announced that their data centers, retail stores, and the Apple Park headquarters in Cupertino all ran on 100% renewable energy.

Apple has now set a goal to strive for a fully closed-loop supply chain, hoping to be able to produce products with 100% recycled materials. As 70% of Apple's greenhouse emissions come from the supply-chain, this would greatly reduce the detrimental impact of product production on the environment.

Other noteworthy CEOs who have signed the agreement include Tesla's Elon Musk, IBM's Ginni Rometty, and Microsoft's Satya Nadella.

The Paris Agreement is a voluntary agreement which seeks to restrict global temperature rise to less than 2C above pre-industrial levels, with a hopeful goal of less than 1.5C. Ratified in 2016, there are nearly 200 countries, territories, and states that have signed onto the agreement.

If left unchecked, the rising global temperature weathers will continue to cause an influx of more severe "super-storms," typhoons and hurricanes, tornadoes, and blizzards. The sea levels will rise as glaciers melt, displacing over 10% of the world's population by the year 2100. As the permafrost melts, methane stores in arctic regions could be released into the atmosphere, which would in turn accelerate global warming.

The primary goal is to limit carbon emissions, mostly through restructuring systems and incentivizing businesses to move to renewable energy. 186 countries within the Paris Agreement have submitted formal carbon reduction targets. The Paris Agreement also seeks to provide funding to developing countries -- up to $100 billion a year -- to mitigate losses from climate change, as well as provide clean, renewable energy frameworks.

While it's true that President Trump has declared the U.S. will withdraw from the Paris Agreement, the withdrawal cannot take place until after the presidential election in 2020. Since the announcement, and despite the US Navy declaring climate change one of the largest threats it faces, the U.S. has made several changes in policy that contradict the underlying terms of the Paris Agreement.
«123»