AppleInsider
Posted: December 10, 2019 10:17PM
in General Discussion edited December 2019
Apple CEO Tim Cook in an interview on Tuesday covered a range of hot-button topics from Apple's reliance on Chinese labor to ongoing antitrust probes in the U.S. and Europe, while hammering home oft-repeated corporate messages like the importance of user privacy. 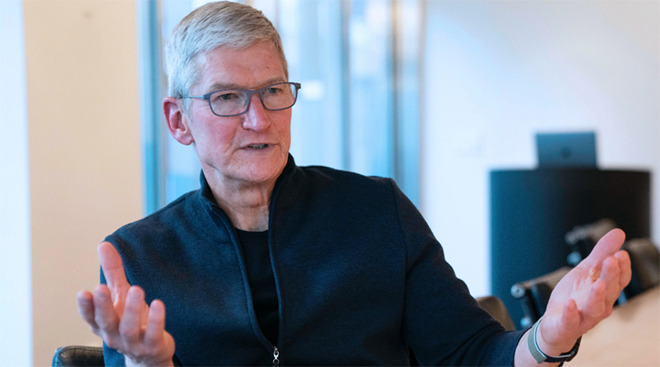 Speaking with Nikkei Asian Review during his Japan tour, Cook touted Apple's track record as a major driver of U.S. economic growth, saying the company created "well over 2 million" jobs domestically. In August, Apple in a press release said it created some 2.4 million jobs spread across suppliers, developers and its own corporate and Apple Store staff.

"The glass on this iPhone is made by Corning in Kentucky. Several of the semiconductors in the iPhone are made in the United States," Cook told Nikkei. "There's enormous manufacturing happening in the U.S., just not the assembly of the final product."

The executive went on to defend Apple's reliance on Chinese manufacturers and suppliers, a point of contention for some U.S. lawmakers, including President Donald Trump, who believe Apple should shift those duties to U.S. companies.

"The way that we do manufacturing is we look at all countries and look to see what skills are resident in each country, and we pick the best," Cook said.

During his time in Japan, Cook visited Seiko Advance, an ink supplier whose product is used in iPhone and other devices. Seiko Advance developed ink and an application process to create the high-quality Space Gray, silver, Midnight Green and Gold hues of iPhone 11 Pro, for example, and has done the same for previous Apple devices.

"They're the reason that we're able to put this color on the iPhone," he said. "We've worked with them for years and we've grown together. Both parties enjoy working together, we push each other to innovate more."

Commenting on smartphone sales, which have slowed over the past couple years in part due to saturation and slow-to-mature growth markets, Cook implied the segment has yet to reach its peak.

On antitrust, Cook took issue with U.S. and European Union investigations into Apple's business, saying the company does not monopolize any one industry category. Further, Apple is not in the same business as fellow tech companies Facebook and Google, which are also targets of the probe, Cook said.

Apple is being scrutinized for its tight control of the App Store, so-called "Sherlocking" of third-party apps and features, and a heavy-handed crackdown on claimed-abusive parental control apps.

U.S. regulators are also looking at Amazon, Facebook and Google.

"A monopoly by itself isn't bad if it's not abused," Cook said. "The question for those companies is, do they abuse it? And that is for regulators to decide, not for me to decide."

"It's very important to realize that tech itself and these large tech companies are not monolithic," he said. "You're not our product, that's very clear in our minds. We don't believe in trafficking your data."

Cook also touched on Apple Watch, again saying Apple will ultimately be remembered for its contributions to health, and mentioned the firm's coding in education initiative. Earlier in his trip, the executive met with students from Rikkyo Primary School.