AppleInsider
Posted: February 7, 2020 12:55PM
in General Discussion edited February 2020
Apple's Deirdre O'Brien has written to Apple Store staff in China to explain the company's plans for reopening in China under the ongoing coronavirus threat, and how the date for reopening stores is still to be determined. 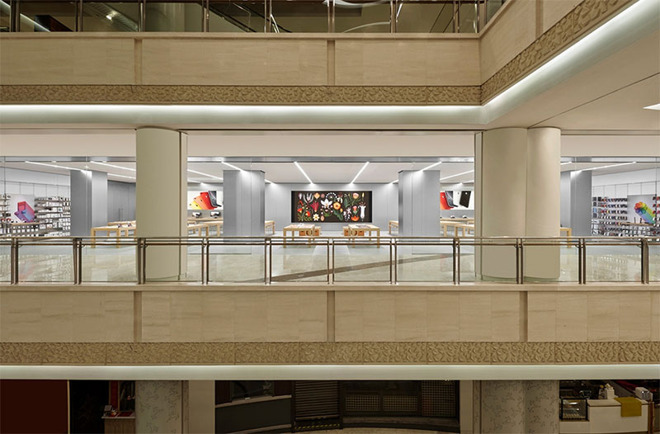 Apple Wonder City in Nanjing is one of three stores closed due to coronavirus.

Currently, Apple offices and 42 stores are closed because of the coronavirus. Apple's Senior Vice President of Retail and People, Deirdre O'Brien, has written to all Apple Store staff in China with an update saying that while Apple was planning to reopen on February 10, discussions are still ongoing.

According to the note by O'Brien, seen by MacGeneration and authenticated by AppleInsider, Apple is continuing to work with heath experts and will be issuing further updates after the February 10 expected open.

Team, I want to thank every one of you for the care, flexibility and spirit you have shown over the past few weeks. Around the world, the entire Apple family stands committed to helping our colleagues, communities, suppliers, partners and customers in China as they care for their health and return to daily life. Apple's support for the global coronavirus response is broad and ongoing, including our donation to the public health effort.

Since my last note, we have been in constant consultation with public health experts, government authorities and our teams and leaders in China. In light of those conversations, I want to share new information about Apple's workplaces.

We are working toward reopening Apple's Corporate Offices and Contact Centers in China next week. We recognize that personal movement and travel restrictions are ongoing and schools are closed in many places, and managers will be working with their teams to offer additional support. You will receive a follow up communication shortly with more information.

Apple's Retail Stores are actively working to reopen at a date that will be determined next week. Additional cleaning, health protocols and local restrictions around public spaces will factor into this decision. Retail teams will receive updates from their managers on the opening date for their store and on other supportive steps we are taking.

Individual business leaders will be reaching out to you soon with more information relevant to your work. In addition to your manager, your People Business Partner and People Support are your resource for any questions you may have. To stay up to date with Apple's efforts, please continue to check the dedicated coronavirus page we've created on the People site.

As we work together to gradually resume work over the next few weeks, your well-being is our first priority. We are deeply grateful to everyone for facing this challenging period with the utmost empathy and understanding.

Apple began closing stores in January. It then closed all the remaining stores and offices in China on February 1, with the intention that they would reopen after February 9.

Currently the stores are listed online as opening on Monday February 10, but according to MacGeneration, it's possible that not all stores will open on the same day.

Separately, iPhone supplier Foxconn has now told staff at its Shenzhen plant to stay away and has yet to list a return date.

Update: Apple publicly confirmed the decision to extend store closures in a statement to CNBC that repeats key details from O'Brien's letter.