AppleInsider
Posted: February 13, 2020 11:51PM
in General Discussion edited November 2020
Apple posted strong HomePod sales for the fourth quarter of 2019, according to new statistics shared Thursday, but its sales growth rate trails that of other top players and the device's overall marketshare sits well behind frontrunners Amazon and Google. 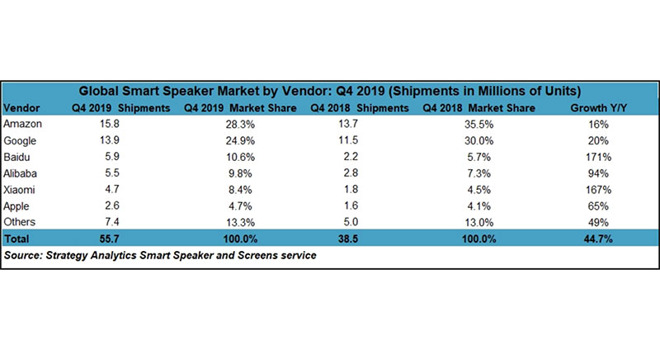 According to the latest estimates from Strategy Analytics, Apple shipped 2.6 million HomePods in the last quarter of 2019 to capture a 4.7% slice of the global smart speaker market. The figure is up 65% from 1.6 million units shipped and a 4.1% marketshare in the year ago quarter.

Despite year-over-year growth, Apple remained in sixth place behind the likes of Amazon, Google and a cadre of Chinese companies.

Market leader Amazon shipped 15.8 million Echo devices to take a 28.3% share of the market, up from 13.7 million units in 2018. Google, which sells a range of speakers loaded with Google Home technology, shipped 13.9 million units for a 24.9% marketshare over the same period, up 20% year on year.

Both Amazon and Google saw their dominant position at the top of the segment erode as challengers Baidu, Alibaba and Xiaomi each enjoyed more fruitful per-quarter increases.

Apple notched the lowest uptick in sales on the year at 1 million devices, followed by Amazon's 2.1 million and Google's 2.4 million units. Baidu exhibited the largest change year-over-year with a 3.7 million unit bump and was trailed by Xiaomi's 2.9 million unit increase. Alibaba was close behind with a difference of 2.7 million units from 2018.

"Consumer appetite for smart speakers remained undimmed during the all-important Q4 period as newly launched devices with improved feature sets and audio performance helped drive record quarterly shipments," said David Watkins, director at Strategy Analytics. "Consumers across the world were once again enticed by scarcely believable deals from leading brands such as Google, Amazon, Baidu and Alibaba, while Google in particular stepped up its giveaway promotional activity in partnership with brands such as YouTube and Spotify."

Overall, the smart speaker segment touched a record high of 55.7 million sales during the fourth quarter of 2019, driven in part by strong holiday demand in the U.S. and Europe, the report said.