AppleInsider
Posted: April 16, 2020 10:21AM
in General Discussion
Proposed new sensors in an Apple Watch, or other wearable device, could determine the presence, volume, and even toxicity, of water they are exposed to. 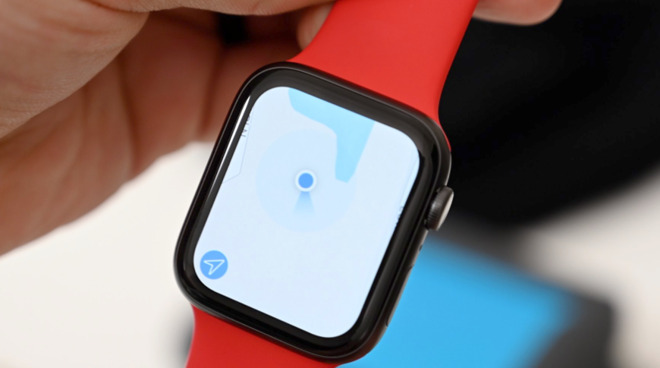 Future Apple Watches could detect water and if necessary, tell the authorities which sea you've just fallen in

Among the myriad health features either currently in the Apple Watch or expected to be coming, there is a new one where the device may be able to detect water. If you're standing outside in the rain, it's likely that you'll notice you're wet just about as quickly as your Watch can, but this is about much more than whether you need an umbrella.

Apple's technology, should it come to fruition, could be used as a trigger, such as automatically launching Dark Sky or using that app's data to tell you when the rain will be over. However, the purpose here is to determine safety, not dampness.

"Portable electronic device as health companion," US Patent No 10,617,358, has future Apple Watches being able to detect water and also test it.

Initially, that test involves the amount of water involved -- so the Watch will spot the difference between a light shower and you having fallen overboard from a ship. Next it could also check your calendar to see if you were going scuba diving today, among other information that could give the Watch "an anticipated context of use." Then it could analyze the water it detects, in order to determine whether it is safe to be exposed to.

The patent is concerned with what could be used as a trigger. For instance, if the watch determines that the wearer has been exposed to "a significant body of water," it could trigger "a sensing element... [to] be used to detect properties of the water deemed to be of interest."

For instance, the Watch could tell the difference between fresh and salt water, then depending on the answer, it might deploy further tests. "For example, if the type of water is determined to be salt, a geo-location sensor can be used to determine a geo-location of the user that can be used to identify the body of water associated with the water sample," continues the patent.

So once water has been detected, an Apple Watch app could make the determination that the user is in trouble. Following that identification, it could notify emergency services of the wearer's location in the sea.

An fish as an example of an icon saying what activity the user is doing, in this case swimming

The patent takes some pains to detail how water on the top of the watch, such as rain, could be distinguished from water underneath it, specifically sweat. It also belabors how this patent application could apply to any number of devices, however its descriptions and drawings all refer to a Watch-like wearable device.

The patent is credited to four inventors, Steven P. Cardinali, William C. Lukens, Katharine E. Tong, and Trevor J. Ness. Cardinali was previously credited on another Apple Watch patent, this time regarding a Digital Crown that recognizes gestures. Tong's many patents include a recent one to do with using the Apple Pencil to trace 3D objects. And Ness was most recently listed as an inventor on a fingertip and face mapping system for VR and AR.