AppleInsider
Posted: April 20, 2020 5:20PM
in General Discussion
Based on Apple Store images, a new Brazilian report infers that Apple may assemble the iPhone SE in the region, in part to circumvent local import laws that drive up the retail cost. 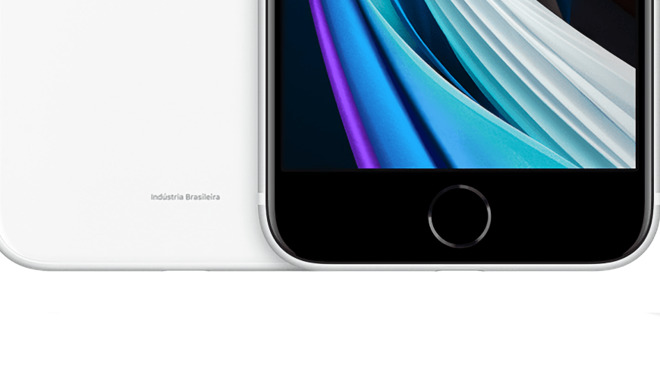 Notice the text at the bottom of the white iPhone SE's rear.

It's possible that Apple may be planning to assemble at least some of its iPhone SE units within Brazil. If it does, then that would probably mean it escapes having to pay import costs within Brazil -- and would also contribute a little to lessening Apple's dependency on factories in China.

The claim has been made by the Brazilian publication iHelpBR, which says (in translation) that "Apple itself indicates that the iPhone SE 2020 will be assembled in Brazil."

iHelpBR says that images of the iPhone SE on the Apple Brazil website include at least one where the words "Industria Brasileira" are written on the back. Literally translated as "Brazilian industry," it effectively means "Made in Brazil."

The publication shows a screengrab from the Pre-Order page. It's the graphic that appears after you have picked a color. At least the white model showed this text.

However, the images on Apple Brazil site currently show no such marking. The publication claims that within a short time after its report, Apple replaced the images.

If correct, though, assembling the iPhone SE in the country would have benefits for Apple and for its customers. There is a significant difference between assembly and manufacture, however. iHelpBR compared the costs of existing imported iPhones.

A straight currency conversion, without any fees, would see the $399 iPhone SE sell in Brazil for approximately 2,113 reals. As it is, Apple's pre-order page pegs that phone at 3,699 reals -- or the equivalent of $700.

It's common for iPhones to cost more overseas, in part because other countries include taxes in the retail price. So in the UK, for instance, a $399 iPhone SE sells for GBP 419, or the equivalent of $523, partly because of the country's 20% value-added tax.

iHelpBR, however, notes that at least some of the extra costs for Brazilian buyers is down to how that country charges import duty on certain items. An iPhone that was assembled in Brazil would cost less there. It would still be more expensive than if the entire phone were actually manufactured in the region, however.

Apple could see this as a way to either reduce its dependency on Chinese assembly, or to make the iPhone SE more appealing in Brazil. However, it would be most likely to make that decision to provide a cheaper option now, when the iPhone SE is first going on sale.

That said, Brazil did take many years to support Apple Pay.