AppleInsider
Posted: April 24, 2020 12:47PM
in General Discussion
UBS will finally end its holdout from adopting Apple Pay in the coming weeks as other payment solutions fall out of favor. 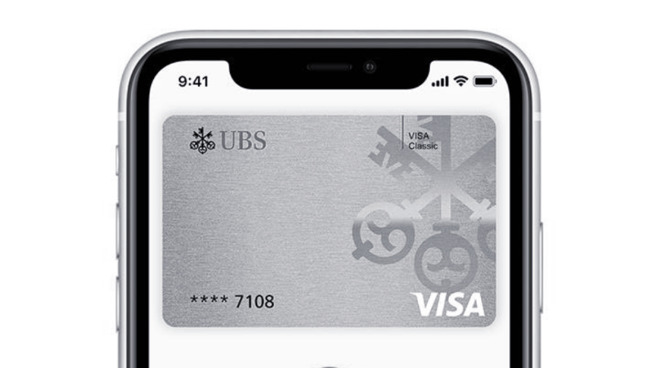 Apple Pay saw slow adoption among the Swiss banking industry, until their boycott and reliance on a single mobile pay solution lead to antitrust investigations. Starting in 2016, Swiss banks slowly started moving away from "Twint," their home-grown mobile payment system of choice, and allowed Apple Pay for their customers. Most of the major banks had adopted Apple's service, with a very large exception in UBS.

The bank made announcements via Twitter and Facebook ahead of its release, suggesting that it could launch Apple Pay support within the next few weeks.

A report from MacPrime detailed the slow transition of Swiss banks from their own solutions to Apple Pay. It appears that constant consumer pressure and antitrust investigations into consolidated payment solutions being used by the Swiss banks finally pushed UBS into adopting Apple Pay.

Apple Pay launched in 2014 as a contactless payment system for iPhone, and was presented as a fast and easy way to pay for things at the register. It later came to Apple Watch once launched in 2015, to further simplify payments. By 2016 Apple had moved Apple Pay to the web, which allowed users to pay using their Watch in tandem with their Mac, or Touch ID on Touch Bar enabled MacBook Pros.