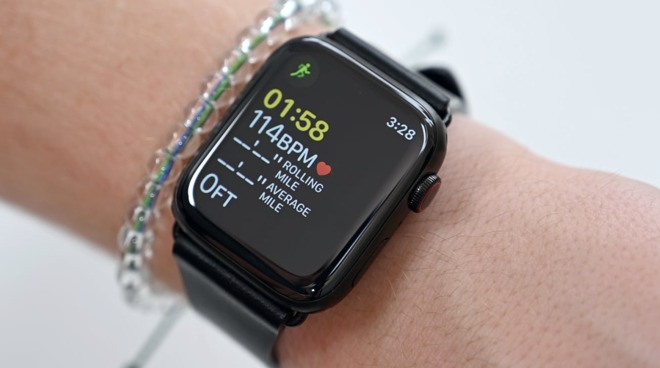 As a wrist-worn device, the Apple Watch is a prime candidate for gesture-based computing. In situations where a user has both hands occupied and unable to make contact with the screen or Digital Crown, the Apple Watch ideally has to offer alternate methods of interactivity.

The Apple Watch already has one gesture that it offers, with the built-in accelerometer used to detect when a user raises the Apple Watch on their wrist to their face, as a form of physical Siri prompt. It stands to reason that the same technique could be used to detect other gestures, but Apple is already looking at alternate methods.

In a patent granted by the US Patent and Trademark Office on Tuesday titled "Motion and gesture input from a wearable device," Apple refines work it laid out in a previous filing from November 2019 concerning how to detect gestures.

While there are considerable similarities between the June 2020 and November 2019 patents, including identical names and detailed description texts, the newer version largely makes updates to the list of claims in the patent with regard to myoelectric sensors. The earlier interpretation does mention the sensor type, but there is a greater focus on myoelectric detection and sensor positioning in the newer document.

It is also an idea that Apple has looked at for quite a while, with some patent applications dating back to 2016explaining of the use of myoelectric sensors.

The Apple Watch is worn in close proximity to muscles and tendons.

Myoelectric sensors are capable of detecting electrical signals generated by a person's muscles. When muscles move, they generate electricity, which can be detected by specialist hardware and fed into a computer for analysis, and potentially used to trigger other events.

For the general public, myoelectric sensors are best known for their use in a myoelectric-controlled prosthesis, artificial limbs containing motors that can articulate elements, like fingers or the wrist of a hand. By detecting electrical signals generated by the wearer's nearby muscles, the sensors can trigger the hand to open and close, without necessarily requiring a conscious thought from the user.

Apple suggests embedding myoelectric sensors to the Apple Watch, potentially used in the construction of the attached watchband, allowing it to fully circle the wrist. On detecting electrical signals likely to have been generated by specific muscles or groups, the data can be compared against a database of potential gestures and related actions, which informs the Apple Watch to perform an action.

The benefits of myoelectric sensors include how it could be used in concert with others, like accelerometers, and can act as a second opinion for what gesture has been performed. An accelerometer may detect motion that could be considered a wrist shake or a wave, but the myoelectric sensors would also reveal if muscles were actively engaged, and therefore if it was an intentional action. 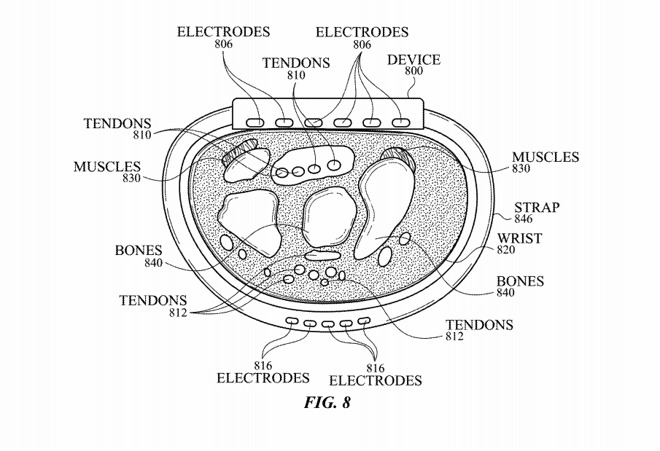 A cross-section showing the closeness of electrodes in the Apple Watch and the band to tendons in the wrist.

Apple files numerous patent applications on a weekly basis, but while the existence of a patent indicates areas of interest for Apple's research and development efforts, they do not guarantee Apple will be using the concepts described in the document in a future product or service.

The idea of monitoring motion isn't new to Apple by any stretch of the imagination, but aside from Raise to Speak, it has largely steered clear of adding new gestures to the Apple Watch.

One patent application from January 2019 indicated it had considered adding extra interfaces to watchOS so that users could select one from multiple different actions on a screen. By rotating the wrist or tilting the arm, the user could effectively roll a ball through a simple tilt maze to confirm an action, without requiring the use of their fingers.

The same filing also proposed rotating "flick" motions as a way to answer a call, with the flicking to match a ringtone's notes acting as a confirmation of intention. Lifting and rotating mechanics could be used to select and send pre-made instant messages, while tilting could be used to answer or reject a call.

Unlike the patents involving the addition of new sensors, the tilt-based patent does stand more chance of being employed due to the existing array of sensors and that it is mostly a software-related change.

The idea of including sensors in the watch band has also been extensively explored by Apple, as well as the creation of self-adjusting watch bands and light-up indicators.