AppleInsider
Posted: June 8, 2020 2:24PM
in General Discussion edited November 2020
Apple is showing its support for the current Black Lives Matter movement and related protests with a pair of recent changes to Apple Maps and Siri.

Amid ongoing global demonstrations protesting police brutality and the killings of George Floyd and Breonna Taylor, Apple CEO Tim Cook has publicly spoken out against racism and injustice. The company is also showing its support in other ways, too.

Apple recently updated its Washington, D.C. satellite imagery on Apple Maps to show off the new Black Lives Matter street mural near the White House. That's an impressive tribute since most satellite imagery is months or years old and the mural was only painted on June 5. 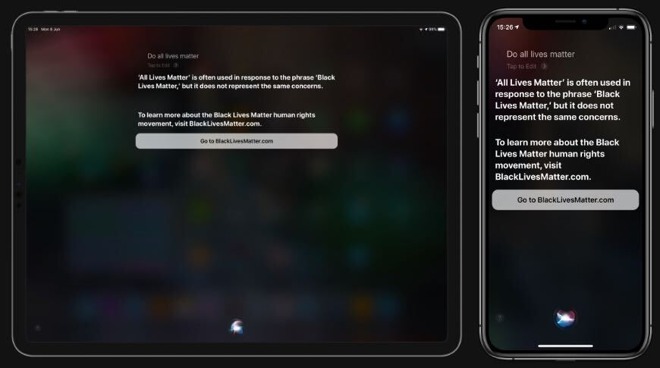 Siri's new respone to the question "do all lives matter?"

In another small gesture of support, Apple has also updated Siri to respond differently to the phrase "all lives matter," which has become a common retort to "Black Lives Matter."

Apple also paid tribute to the current human rights movement with Apple Music, which participated in "Black Out Tuesday" on June 2, and the App Store, which Apple updated to highlight various apps focused on racism, political action and those created by Black developers.

Although most protests have remained largely peaceful, the first weekend of demonstrations following the murder of George Floyd saw opportunists taking advantage of them to smash and loot Apple Stores and other retail locations.