Apple was cautious when it shifted to Intel, and an ARM Mac migration will be no different...

AppleInsider
Posted: June 10, 2020 4:36PM
in General Discussion
Apple took a convoluted 20-year journey to shift the Mac to Intel processors, and it isn't jumping into ARM on a whim. Here's what the previous journey looked like. 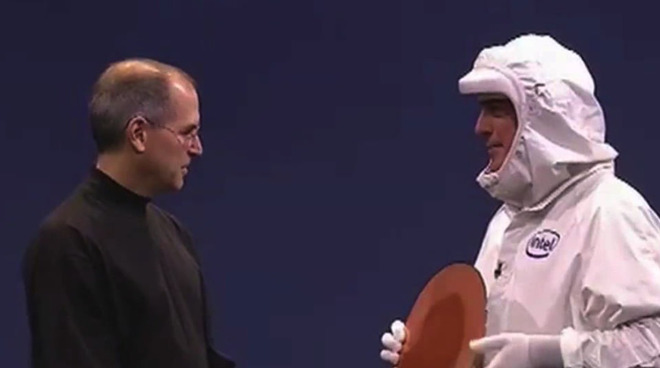 Steve Jobs welcomes Intel to the Mac in 2005

There have been rumors for a decade that Apple will move the Mac from Intel to ARM processors. It's no surprise that if it happens, Apple will have spent a time getting the ARM Mac ready, but we might discover that Apple has been thinking about it for a lot longer.

That's because the 2005 move to Intel had its roots going back far, far further than was suspected at the time.

If you are truly a long-time Mac user, then you can imagine how strange it must have been when the familiar startup chime first came out of an Intel PC. But it wasn't in 2005 as Steve Jobs announced was announcing the first Intel Macs, though. Instead, the familiar Mac startup was first shown on a PC all the way back on December 4, 1992.

And even that wasn't the start of Apple's move to Intel.

The original Macintosh was launched on January 24, 1984, and ran on the Motorola 68000 processor. It wasn't an immediate success, though, and that's partly because it expensive, partly because it was slow. By 1985, Microsoft's Bill Gates was calling it a failure -- and he was telling Apple how to fix it. 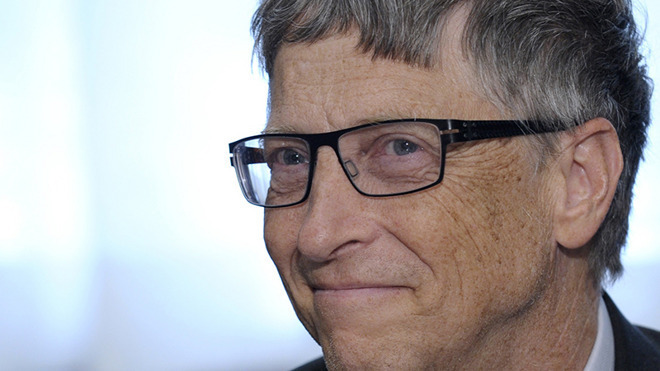 In June 1985, Gates wrote a multi-page memo to then-CEO John Sculley detailing why he thought Apple should license the Mac operating system. While he wrote praisingly about the Intel architecture in IBM PCs, he didn't specify that he meant the Mac should run it.

Apple's own Dan Eilers did. Apple didn't take Gates up on his offer of helping out, but the company did task Eilers, then its director of strategic investment, with looking into it. He strongly proposed that Apple moved to Intel and he wasn't alone.

Larry Tesler, inventor of copy-and-paste on computers, revealed in 2011 that the whole engineering team had wanted the move.

"We had actually tried a few years before to port the MacOS to Intel, but there was so much machine code still there, that to make it be able to run both, it was just really really hard," he said.

"And so a number of the senior engineers and I got together and we recommended that first we modernize the operating system, and then we try to get it to run on Intel, initially by developing our own in-house operating system which turned out to be one of these projects that just grew and grew and never finished."

Also in the team at this time, and very much on board with an Intel move, was Alan Kay, practically a legend in computing. His argument, as quoted in Owen Linzmayer's "Apple Confidential 2.0," was that what made the Mac special was its operating system, and its software.

Kay called this "probably the largest battle I lost here at Apple," and the company did not move to Intel in 1985. It tried to hammer out a deal in 1987, but the company did come close to it with the now forgotten Apollo Computer of Massachusetts.

The two companies did many collaborations, but this one would've seen the Mac operating system licensed to Apollo. If John Sculley hadn't decided Apollo wasn't going to stick around much longer, Apple would've had its first clone then and surely Intel machines would've followed. 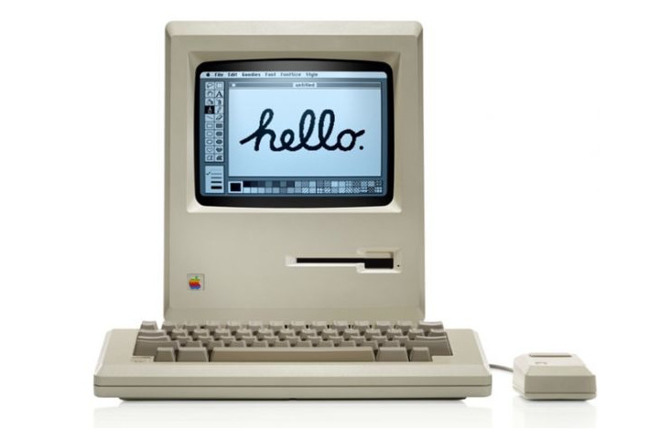 The original Mac ran on a Motorola 68000 processor, but even shortly afterwards, Apple engineers wanted a move to Intel

As it is, it took until August 1990 before Dan Eilers tried again. He was even more insistent than Bill Gates had been, and presented what is reportedly a 112-page memo to management to try and sell the concept.

It was around this time that Windows 3 came out, and in 1992 would become a real threat to Apple with the much improved Windows 3.1. Early in 1992, though, Apple was not the only company looking under threat -- so was Novell.

Whether it was Novell being convincing in its desire to license the Mac OS to run on Intel, or Eilers' making a better case, Apple started to move to Intel on February 14, 1992. At John Sculley's direction, the project was started and it was called "Star Trek."

The project was called that because it was also known as taking the Mac "where no Mac has gone before," into Intel territory. Bill Gates wasn't impressed. Maybe because it was seven years after he'd suggested it, he called Apple running the Mac on Intel as being "like putting lipstick on a chicken."

It was expensive lipstick. Apple and Novell together put four engineers on the project, headed by Chris DeRossi. On top of their unknown salaries, the four were promised a bonus if they could get the Mac running successfully on a PC. The bonuses, according to Linzmayer, ranged from $16,000 to $25,000.

In today's money, that's between $30,000 and $45,700, and the team did it. Or at least, they did it enough to get those bonuses and reportedly spend a lot of them on a doubtlessly deserved holiday.

DeRossi and Apple's vice president of software engineering, Roger Heinen, presented the results on December 4, 1992. That's when the first Intel Mac started up, complete with its "Welcome to Macintosh" front screen.

What the team had done was get System 7.1 running on a PC -- but in truth it was a little more basic than that. Not all of the system was running, for one thing, but the chief issue was that it was only System 7.1 that would run at all. No apps did.

Unfortunately, John Sculley was on his way out when that demo happened. His replacement Michael Spindler didn't agree that licensing an Intel version of the Mac was a good idea. Plus, one of the two demonstrators, Roger Heinen, left Apple and went to work for Microsoft.

Spindler didn't cancel the project right away, but he might as well have. The original team of four had become one of 18, and then as Sculley left and Apple's Advanced Technology Group took over the project, it became 50.

Today Apple might well put 50 people working on a project, but back then, it was an expensive proposition. Especially so when Apple was then successfully committing to the PowerPC. And, especially when the 50 were reportedly engaged mostly in writing proposals instead of code.

Consequently, they were an easy target when Spindler needed to cut costs. And in June 1993, the "Star Trek" project was cancelled and no more work was done on that move to Intel.

"It's perfectly technically feasible to port [Mac OS X] Panther to any processor," said Steve Jobs in November 2003. "We're running it on the PowerPC and we're very happy with the PowerPC. We have all the options in the world, but the PowerPC road map looks very strong so we don't have any plans to switch processor families at this point."

According to Linzmayer, Jobs said this at an analyst meeting conference call, but beyond that account, we couldn't confirm the quote. If it is accurate, though, then something big changed right after it -- and it's probably to do with that phrase "road map."

Ultimately, Jobs would say the opposite at the launch of the transition to Intel, that PowerPC just didn't have the future Apple needed. Internally, though, Jobs or at least enough key personnel within Apple had been suspecting this for some time.

Around the year 2000, Apple began working on what would become the successful move. "Mac OS X has been leading a secret double life for the past five years," revealed Steve Jobs at the 2005 launch.

"There have been rumors to this effect," he continued, to laughter from a knowing WWDC 2005 audience who may had been reading half a decade's worth of rumors about it on AppleInsider. Jobs showed a slide marking the precise building at Apple's Infinite Loop campus where the work took place. "Right there, we've had teams doing the just-in-case scenario."

"Our rule has been that our designs for OS X must be processor independent," he said. "And that every project must be built for both the PowerPC and Intel processors. So today for the first time, I can confirm the rumors that every release of Mac OS X has been compiled for both PowerPC and Intel. This has been going on for the last five years."

Specifically, it had been going on since the release of Mac OS X Cheetah, which was released to the public on March 21, 2001.

It's no surprise whatsoever that anything Apple does is planned in advance. Even a new Apple Watch band takes some work before it's announced to the public, so a gigantic change such as a move to a new processor is going to take time. It is going to start in secret, too, as Apple has learned that transition projects can go wrong.

Those first projects may have failed to move the Mac over to Intel, but once Apple truly committed to doing it, the company worked very quickly and very efficiently. That transition of the entire Mac lineup was incredibly smooth, and that's one reason why we can make some assumptions about the move to ARM.

First, it's been well and probably very long-planned. That's both in terms of the technology -- you can be certain that there are ARM-based Macs in Apple Park right now -- but also in terms of the transition.

What may be the most significant lesson from the Intel move, though, comes in that quote from Steve Jobs. "Our rule has been that our designs for OS X must be processor independent."

Having separated out the operating system so that it could sit atop either PowerPC or Intel, it seems unlikely that Apple will have ever decided to undo that. The current macOS is probably in a similar position and that means it won't need rewriting to work on ARM.

Apps will need work, as we saw in the Intel move, and even before that with the transition to PowerPC. Where the '90s project was a gigantic rewriting of the operating system to get it to work on Intel's processors, Apple has set the table with moves it has made for the last two decades to try and make that migration dramatically easier.

Or at least, easier for Apple. Regardless of the underpinnings of the operating system, it is still going to be the case that developers will shoulder a large burden. That will mean some developers having more complex jobs to do than others.

Users left in the cold with apps that don't make the transition won't benefit. But, the majority of the Mac using base, especially those yet to come, will see big benefits, though.