AppleInsider
Posted: June 29, 2020 6:40PM
in General Discussion edited June 2020
The New York Times is pulling itself out from Apple News, citing a need to fight for "readers' attention and dollars" against not only other news organizations, but also tech companies like Apple. 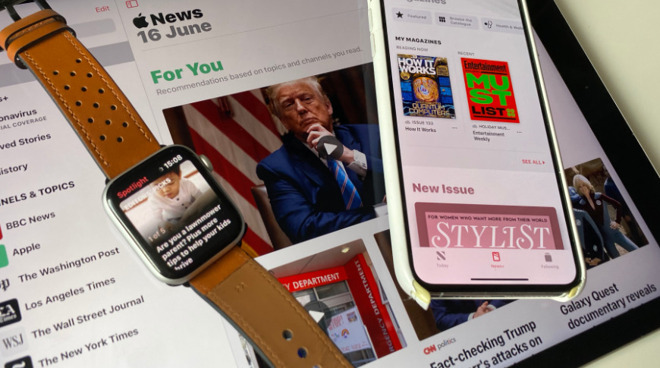 Apple News on an iPhone, iPad, and Apple Watch

In an explanatory piece on its website, the publication claims it has made acquiring more subscribers a key business goal, but that Apple News has provided it "little in the way of direct relationships with readers and little control over the business." It instead wants to push users to its website and mobile app to gain subscribers and "fund quality journalism."

"Core to a healthy model between The Times and the platforms is a direct path for sending those readers back into our environments, where we control the presentation of our report, the relationships with our readers, and the nature of our business rules," wrote COO Meredith Kopit Levien in a memo to NYT employees. "Our relationship with Apple News does not fit within these parameters."

In response to the withdrawal, an Apple spokesperson seemingly blamed the NYT for the breakdown in the relationship, in that the NYT only offered "Apple News a few stories a day," but Apple News would continue to provide trusted information from thousands of other publishers. "We are also committed to supporting quality journalism through the proven business models of advertising, subscriptions, and commerce," said the spokesperson.

Acknowledging the existence of the Apple News app's 125 million users, the NYT offers the view that the advertising revenue it provides is underwhelming, while at the same time complaining that Apple took a 30% cut of subscriptions sold within the app.

The NYT then gave a potted history of Apple News+, the subscription service that provided users with access to many publications usually blocked by a paywall subscription at a reasonable monthly cost, with Apple said to have promised the delivery of customers publications "wouldn't otherwise get." However, the price of said customers was seemingly high, with publications taking part having to not only undercut their existing subscription prices, but also to share half of the monthly fee with other news organizations while Apple took the remainder.

Pointing out that other major publishers like the Wall Street Journal and Conde Nast took up Apple's deal then were "underwhelmed by the sales" months later, the NYT cheerily proclaims it "passed on Apple News+," before adding it reduced the number of articles it supplied to the free Apple News.

At the time, Times CEO Mark Thompson warned publishers of working with Apple, suggesting "We tend to be quite leery about the idea of almost habituating people to find our journalism somewhere else."

The NYT even admits this isn't the only time it has struggled with tech companies, including ceasing production of Instant Articles for Facebook in 2017, citing a lack of revenue. As for the present, the NYT is paid by Facebook to include stories in the Facebook app's news tab.

As for Google News, the NYT still appears there, with the report taking another dig against Apple's practices by adding Google News sends readers to publishers websites.

Despite pulling out of Apple News, Levien believes the removal won't have a "material impact" to the NYT business, which is enjoying higher digital subscriber revenue despite a reduction in advertising. The NYT would still work with Apple in "other ways," such as with apps, podcasts, and hardware.