AppleInsider
Posted: July 2, 2020 1:25PM
in General Discussion edited July 2020
Future Apple keyboards may feature keycaps that are a mixture of a glass top and color backlighting, for longer-lasting keys which could potentially be used as mini displays. 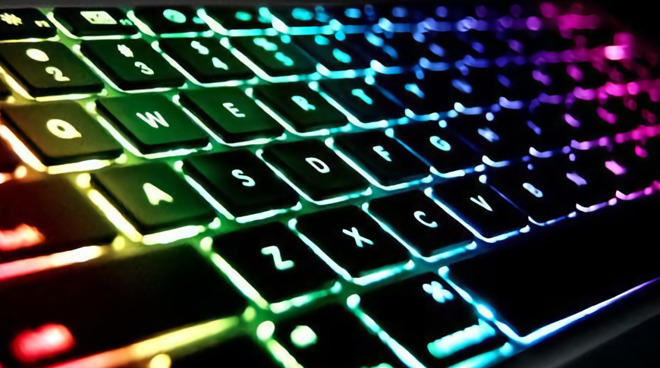 If you've been using Apple gear for long enough, you know that they are always hard-wearing, and that they always last many years. However, you'll also know that the first thing to show wear is the keyboard. The letter legends on the keys eventually rub off, and at times the keys themselves wear out.

Apple wants to address this with a plan that also lends itself to future developments. "Transparent Keycaps" is chiefly concerned with using glass to make stronger keys -- but it also address potential further features.

"[For keyboards] a user can physically engage the selected material several hundreds of thousands of times, if not millions of times, over the life of a device," says the application. "Many visually pleasing solutions lack the durability for such extended function."

"This can be especially true when electronic devices and/or associated input devices are made smaller, thinner, or otherwise reduced in dimension," it continues. "Reduced dimensions of keycaps, for example, can lead to keycaps that are less structurally sound and have a shorter lifetime than thicker keycaps made of the same material."

Apple's proposed solution includes "a keycap for a keyboard that includes a key body comprising a top external surface." That top could be transparent with the key's letter attached to the bottom surface of the transparent body, with the light-blocking material defining a glyph shape."

So the legend could be within the key instead of printed on top of it. Apple's application describes in detail many different shapes and forms for how the key's top could be fashioned, but it also refers to a further option to do with backlighting.

So if the primary concern is making a longer-lasting keyboard, the proposed process would at the least change how backlighting is done. Rather than light shining through the key's letter and around its sides, it could be that everything but the letter is illuminated. Further, that illumination could be from lights that change color. 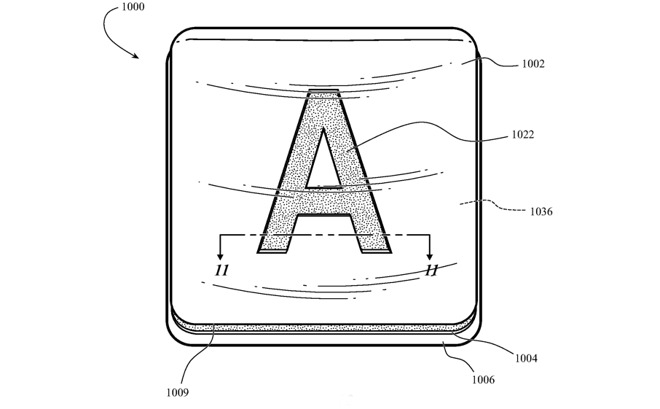 Detail from the patent application showing one possible design of key

It's an extremely small step from that to providing keys that dynamically change color under software control, and Apple has already investigated this with a patent for using LEDs within keys.

That patent's inventors include the prolific Paul X. Wang, who is also one of the nine credited for the transparent keycaps application. Among the others are Keith J. Hendren, recently co-credited with an all-glass redesign of the iMac. There is als Matthew S. Rogers, previously listed as co-inventor on plans for including hidden cameras and removable earphones in "Apple Glass."