AppleInsider
Posted: July 27, 2020 2:14PM
in iPod + iTunes + AppleTV edited July 2020
With wins for "Ghostwriter" and "Peanuts in Space: Secrets of Apollo 10," Apple TV+ has become the first streaming video service to win a Daytime Emmy Award in the first year of availability. 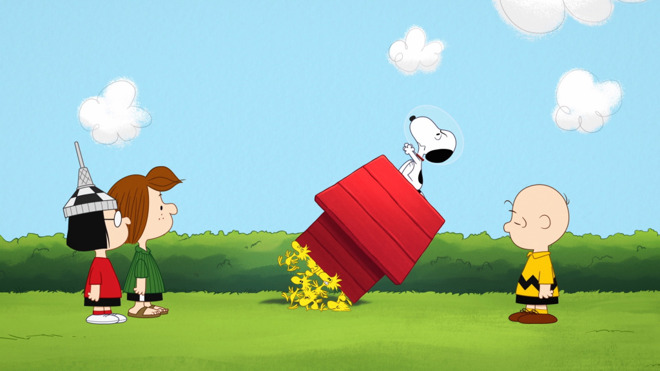 Apple TV+ won the two awards during the presentation for the 47th Annual Daytime Emmys. The service won outstanding children's or family viewing programming for "Ghostwriter" and for outstanding single camera editing for "Peanuts in Space: Secrets of Apollo 10"

The reboot of "Ghostwriter" helps build reading comprehension and vocabulary skills, and expands kids' understanding of creative writing. In addition to the series' Daytime Emmy nominations and win, the series has earned a Parents' Choice Gold Medal Award, as well as recognition from Common Sense Media.

Apple commissioned "Peanuts in Space: Secrets of Apollo 10" stars Jeff Goldblum as a self-published NASA historian and Ron Howard as himself. "Peanuts in Space" takes an lighthearted look at NASA and Charles M. Schulz's beloved Peanuts characters, and asks the question if Snoopy was a top-secret astronaut.

In total, since the Apple TV+ global launch in November 2019, the service has won a total of 25 awards with 71 awards nominations. Wins include Outstanding Performance by a Female Actor in a Drama Series for Jennifer Aniston at the SAG Awards and Best Supporting Actor in a Drama Series for Billy Crudup at the Critics Choice Awards; three Golden Globe Award nominations for "The Morning Show,; a Peabody Award for comedy series "Dickinson"; an NAACP Image Award for the series "Truth Be Told"; and a Cinema for Peace International Green Film Award for the film "The Elephant Queen."

At its virtual WWDC keynote on June 22, Apple touted the success of Apple TV+, stating that the service is now on one billion screens, nearly eight months after its launch. The "1 billion screens" figure referred to televisions and devices, although Apple has not said exactly how many subscribers the service has.

The service remains free for initial purchasers of devices that Apple launched in Fall 2019. When those free subscriptions expire, or for new subscribers, the service is $4.99 per month.