AppleInsider
Posted: July 30, 2020 1:32PM
in General Discussion
To keep delicate and very small sensors within a future iPhone or Apple Watch clean and working perfectly, Apple is researching the use of heat and light to decompose contaminants. 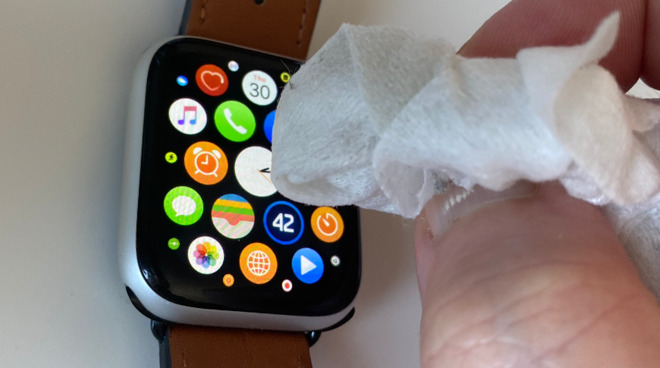 Not really how you should clean an Apple Watch

Apple has a regularly updated support page about how users can keep their devices clean, but it can only go so far. The very oil from our fingers can make some device sensors less effective, and those can be inaccessible to users.

In a pair of related patent applications, Apple describes methods of how certain types of sensor in an Apple Watch or an iPhone can could utilize their own cleaning system. They could deploy ozone, generated by an ultraviolet light, to push away or even erode and decompose "unwanted organic compounds" inside the device.

"Many mobile electronic devices are equipped with sensors and transducers that enable the devices to perform far more functionalities than communications," says an application entitled "Removal of organic contamination by ozone oxidation for environmental sensor integration."

An almost identical application concentrating on the UV side of the issue, says precisely the same thing. They both continue by listing how "heartbeat, blood pressure and blood oxygen level measurement are among the numerous applications" that such devices may use.

"Further, smart mobile communication devices (e.g., smartphones and smartwatches) can be equipped with environmental sensors, such as pressure sensors, humidity sensors and gas sensors," they continue. Apple has previously researched the possibility of adding a sensor to iPhones which will detect poisonous gas.

The problem with that and all such sensors, especially if they have to be exposed to the air, is that the air contains many other things. "[Consequently] these devices are prone to organic residue accumulation, such as skin oils, dirt, body hair, etc."

"Such accumulations can contaminate the device housing and/or the sensor packaging that can produce interference signals and result in increasing sensor errors over an extended period," says Apple.

"For example, miniature gas sensors rely on gas diffusion into the device housing to detect an ambient gas and to infer the ambient gas concentration," Apple continues. "However, human skin lipids produce squalene, an oily organic compound that can stick to the housing surface and/or sensor packaging. Squalene reacts strongly with oxidizing gases (e.g., ozone and nitrogen oxides), which could significantly increase the errors of such sensors."

The applications go on to mention how "conventional methods may use a physical mesh... to prevent accumulation of dust or larger particles," but that this "may not be effective." An alternative idea is to use air flow, to have a fan blowing across the device. "[However this] scheme may not be ideal for mobile devices, given the size, power and noise impacts."

Instead, Apple proposes a system "to decompose organic contaminants inside product housing or near sensor packaging, in order to restore the clean environment needed for accurate readings of the integrated environmental sensors." And that system can be "by using ultraviolet (UV) light to illuminate the contaminants."

"The UV light rays can initiate a photo-oxidation process, which results in decomposition of squalene," says Apple. "Upon reaction with UV light, squalene, shown with its chemical formula, is decomposed into three byproducts... that may not be hazardous to environmental sensors." 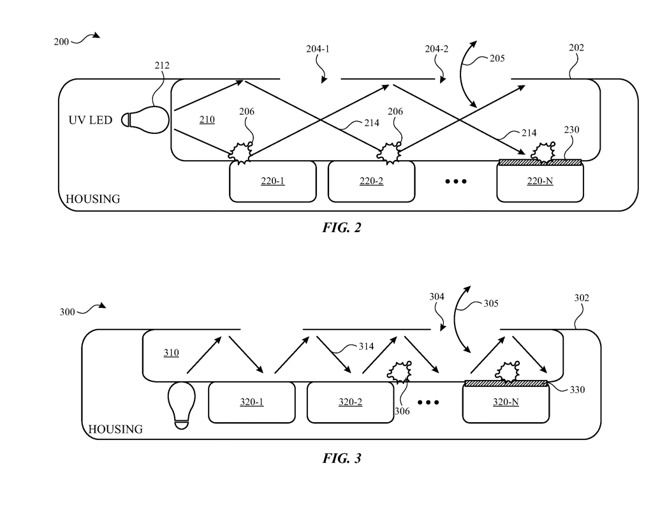 There are these two near-identical patent applications because they are attempting to solve the same problem and doing so with methods that overlap. Ozone oxidation can decompose certain contaminants, but, for example, "[squalene] reacts strongly with oxidizing gases (e.g., ozone and nitrogen oxides), which could significantly increase the errors of such sensors."

UV light can therefore be the better option for decomposing the contaminants, but UV light generates ozone. So the two patent applications overlap as they detail ways of generating, controlling, and using both UV and ozone within small devices.

Between them, the two patent applications are credited to a total of four inventors. They include Ashwin Balasubramanian, who was most recently listed on a patent regarding making iPhones work as emergency beacons even when they're outside the range of a cell service.