AppleInsider
Posted: September 8, 2020 7:08PM
in Future Apple Hardware edited September 2020
A list of keywords associated with Apple's YouTube stream for its September 15 event suggests it won't involve the launch of a new iPhone at all, but does seemingly confirm the arrival of new products including the "Apple Watch Series 6." 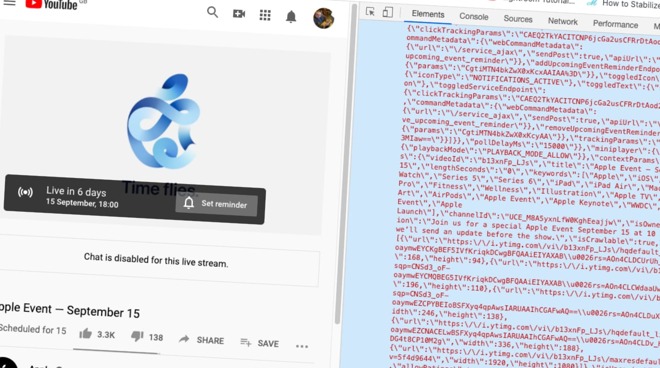 Following the announcement of Apple's "Time Flies" event on September 15, Apple set up a video stream on YouTube that will be used to air the launch event itself. The page on YouTube plainly displays when the event will take place and the logo, but further digging introduces some extra elements that may inform what Apple will show during the presentation.

First reported by Guilherme Rambo on Twitter, the list of keywords within the page source used to describe the stream for search engines is keenly missing out on the term "iPhone 12." While there are mentions of "iOS," and "iPhone" in the list, there isn't one specifically mentioning an iPhone model by name or number.

While this may be an oversight if Apple were going to introduce an iPhone at the event, as other reports suggest won't happen, the same can't be said for the Apple Watch. While there is an "Apple Watch" keyword in the list, there's also separate keywords for "Series 5" and "Series 6" in the list, which practically confirms the next model name as the "Apple Watch Series 6."

Furthermore, there are mentions of the "iPad" and "iPad Air." Rumors point to an iPad launch occurring, potentially taking the form of the "iPad Air 4."

Other keywords mention "MacBook" and "MacBook Pro," "Mac" and "iMac," "AirPods," and the "Apple TV," among others.

The appearance of the Macs may be an indication of Apple teasing some sort of Apple Silicon involvement at the event, though it is more likely Apple would save such a major launch for its own separate event.

The full list of keywords, in order of listing, reads: