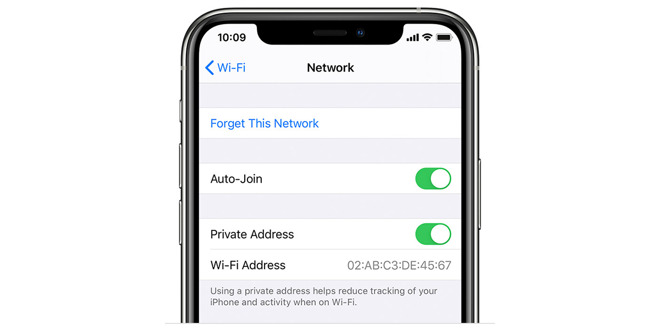 But the random MAC address can also break certain network or device management systems. For example, in a notice on Thursday, Cisco warned that its Identity Services Engine could run into problems if a user has the feature enabled because it relies on MAC address lookup.

Mobile device management, or MDM, systems could fail to detect a device running iOS 14 if it's using a randomized MAC address. Employees or students using a Bring Your Own Device system for education or work could also see issues with network security requirements, since those often rely on MAC addresses for authentication.

It isn't just Apple devices that can cause issues. Google in Android 10 also added randomized MAC addresses as a feature, the networking company notes.

Cisco notes that there's currently no large scale solution for these problems that can be deployed by itself or network operators. However, there is an easy solution, by asking a user to disable the feature.

Users can turn off private Wi-Fi addresses by tapping on a network in the Wi-Fi Settings pane and hitting the toggle next to Private Address.

While that could allow for a network operator to track users, it will mitigate potential issues with MDM and "bring your own device" systems at work and school. It's also worth noting that the feature is enabled or disabled on a per-network basis, meaning you can selectively disable it just for work or school networks.