AppleInsider
Posted: September 23, 2020 9:12PM
in General Discussion
The UK National Health Service is rolling out its coronavirus contact tracing app based on the Exposure Notification framework created by Apple and Google. 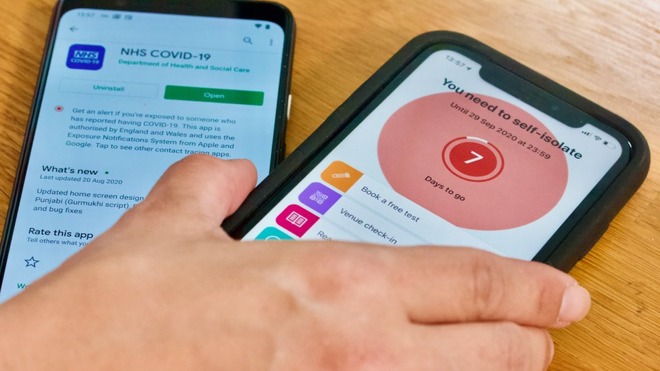 As of Wednesday evening, the NHS COVID-19 app should be available to residents of Wales and England on the iOS App Store and the Google Play Store. Although originally slated to debut Thursday, the app appears to have gone live a bit early.

As with other Exposure Notification apps based on the Apple-Google API, the app will alert users if they come in close proximity to someone that has been diagnosed with COVID-19.

The system relies on short-range Bluetooth tracking and doesn't collect any location data or personally identifiable information. All data that is collected is stored in a decentralized manner on a user's device, per Apple and Google's rules.

Additionally, NHS COVID-19 has other features meant to aid in contact tracing, including the ability to scan QR codes to register visits to locations like restaurants or stores.

NHS officials initially rejected the Apple-Google contact tracing system because it stored data in a decentralized manner. After its proprietary system delivered poor results, the NHS backtracked on that decision and opted to work with the Apple and Google framework.

The UK's app joins a growing list of other digital contact tracing solutions in Europe and beyond, including in the U.S., Canada, Denmark, Switzerland, Latvia, Germany, and Poland.

The app will be available to users running iOS 13.5 or later and Android 6.0 or later, and is free to download and use. The iOS version can be found here, while the Android version is available here.