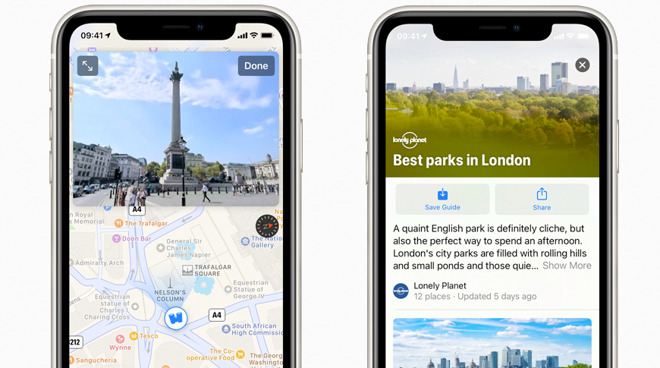 Starting today, Apple Maps has gained some impressive new features for those in the U.K. and Ireland. Look Around, Apple's answer to Google's Street View, now allows anyone to take a street-level look at London, Edinburgh, and Dublin. Apple also states that many more places will be added eventually. Major metros also now feature Flyover, an immersive feature that allows users to view major metro areas with photo-realistic, immersive, 3D views.

"Apple Maps is the best way to explore and navigate the world -- all while protecting your privacy -- and we're excited to bring the new map to our users in the U.K. and Ireland," said Eddy Cue, Apple's senior vice president of Internet Software and Services. "We have rebuilt the map from the ground up, with better navigation, richer detail, more accurate information for places, and incredible features like Look Around, cycling directions, and curated Guides from trusted resources. We've reimagined how Maps can help users find the places they love and get to where they're going even faster and easier."

The locales also gain Guides, a curated list of interesting places to visit in major cities. Apple states that Guides was created by a group of trusted resources that includes Time Out Group, Lonely Planet, and the Evening Standard.

Cyclists can now use Apple Maps to plan out trips, with the ability to see elevation, traffic conditions, and whether or not a given route has stairs.

Those who drive electric vehicles will now be able to add charging stops along routes based on the vehicle charge and charger types.

Additional features include the ability to see transit schedules, live departure and arrival times, live locations of busses and trains, and even transit outages.

Certain airports and malls now feature Indoor Maps, allowing users to see what level they're on, restroom locations, and a list that shows which stores and restaurants are open.

Users will now be able to share their estimated time of arrival to friends and family with a single tap. The receiver will be sent alerts if the traveler runs into a significant delay.

Siri will now give more natural-sounding directions that are easier to follow. Siri can also scan a user's Mail, Calendar, and Wallet for airport travelers, helping them find terminals, gate locations, and reminding them of departure and arrival times.