AppleInsider
Posted: November 3, 2020 1:14PM
in Future Apple Hardware
Apple hardware may offer faster 5G speeds in the future, by using mmWave signals to determine if nearby objects are blocking the path of transmissions, enabling it to switch to a different antenna configuration. 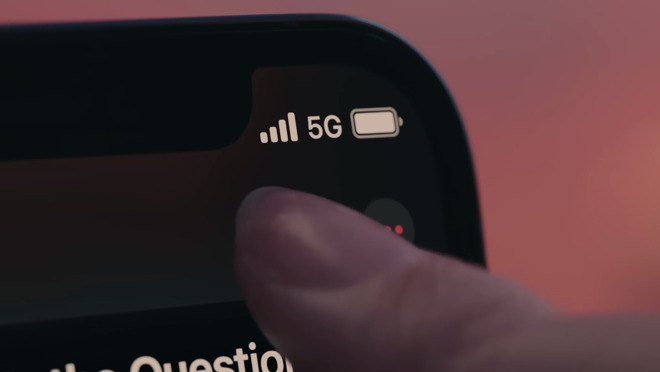 The iPhone 12 lineup of devices was launched with 5G support across the entire range. Supporting the telecommunications standard promises consumers gigabit-level speeds where available on a cellular network, using mmWave communications.

However, mmWave is the most temperamental element of 5G, with the relatively fragile signal operating at a fairly short range for cellular communications, as well as being easily blocked by objects. This can range from the user's own hand to glass, and potentially even rain in some circumstances.

To combat this, devices are equipped with multiple mmWave antennas, maximizing the chance that a signal could be received or transmitted without being blocked by external forces. Even this doesn't necessarily help completely, as while it is possible for a device to automatically switch to antennas receiving the best signal at any time, it isn't aware of what is causing problems. 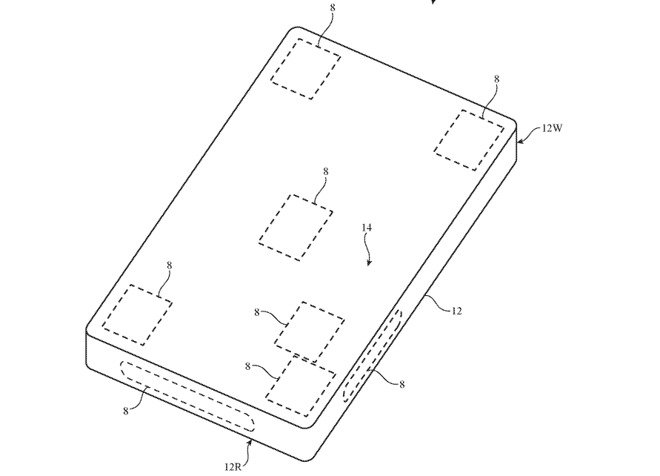 Antennas for mmWave are already located in multiple places on an iPhone.

If it were possible to determine if the issue in receiving signal through specific antennas was due to a nearby obstacle, such as hand placement, it would be feasible that the device could inform the user of an issue that may be rectified if warranted.

In a patent granted to Apple on Tuesday by the US Patent and Trademark Office titled "Electronic devices having phased antenna arrays for performing proximity detection operations," Apple suggests it may be possible to create a rangefinding system specifically using mmWave antennas.

Taking advantage of the fact there's multiple antennas strewn across the device in the first place, the system would use a phased antenna array with both horizontally-polarized and vertically-polarized antenna feeds. The antennas may also offer some form of beam steering functionality with connected circuitry.

The idea is for the device to transmit radio signals from one set of feeds with a selected phase, and then to listen out for any signal reflections using a second set in the same phased array. Phase measurement circuitry would gather phase measurement values from signals received by the array, which can be compared against what was transmitted to create a phase difference value.

Objects may influence the transmission of radio signals, so while some antennas in an array may be affected, some won't.

This phase difference value can feasibly be used to perform object proximity detection operations, namely determining if there's something nearby. If the detected difference exceeds a certain threshold when compared against a predefined calibrated value, it would know with some certainty that there's an object nearby that is interfering with signals.

Determining the presence of a blocking object would allow the device to disable the phased antenna array, and opt for a different array configuration. Conversely, if it works out there's no blockage, the system could increase the power level of transmissions safely.

While this could feasibly be used by many different radio technologies, the application of the patent seems to be mainly for mmWave, with repeated mentions of "millimeter or centimeter wave" frequencies throughout.

The patent lists its inventors as Matthew A. Mow, Rodney A. Gomez Angulo, Harish Rajagopalan, and Simone Paulotto. It was originally filed on February 27, 2018. 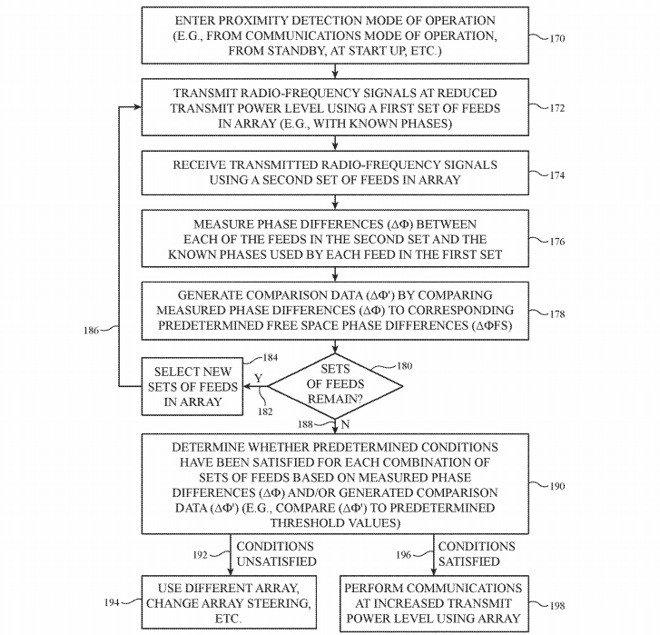 A flowchart for detecting nearby obstacles using mmWave.

Apple files numerous patent applications on a weekly basis, but while the existence of the patent filing indicates areas of interest for Apple's research and development systems, it doesn't guarantee it will be used in a future product or service.

Given the presence of 5G and mmWave support in the current generation of iPhones, it would seem plausible that Apple would employ some sort of system similar to this to enhance functionality, but it is unknown if it is actually being used. It is possible that Apple is limited to whatever mmWave management system is being employed by Qualcomm for its antennas and modems, though there is suggestion that Apple may move forward with designs for its own modems in the future.

Apple's previous patent filings include some relating to antenna and signal technologies. In 2013, it was granted a patent for a "microslot antenna," taking advantage of a device's casing to let antennas that are millimeters in length and microns in width to be used instead of more conventional versions.

Apple has also explored embedding antennas into Apple Watch bands to improve reception, and even embedding it in the display.