AppleInsider
Posted: December 6, 2020 6:30PM
in General Discussion edited December 2020
A prototype version of the Macintosh Classic has surfaced on Twitter, with images showing the antique Mac in an completely clear enclosure used to show internal clearances during development. 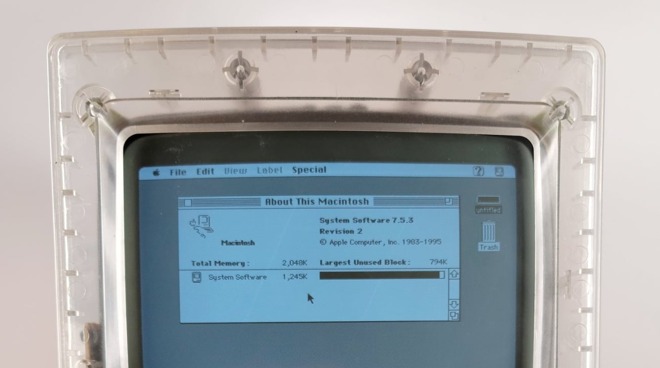 The Macintosh Classic with a clear casing [@DongleBookPro]

The Macintosh Classic is a familiar vintage computer that is known for its classic design, as well as its grey casing. In images shared by "@DongleBookPro" on Twitter, Apple used a different casing style during its development.

The photographs of the "Prototype Macintosh Classic" posted on Saturday show the computer housed in a clear plastic case. This gives an opportunity for observers to have a good look at how the inside of the computer was laid out, with the large CRT screen taking up a lot of space at the top, while the lower section housed the majority of hardware used for its operation.

While clear enough to display the text "Made in Singapore" in reverse due to being stamped inside the casing, not all of the case is transparent. On the front, a rainbow-colored Apple logo is proudly displayed in one corner, highlighting the manufacturer's identity.

On the back, a large sticker confirms the "unit is for development purposes only," and it was "not to be sold in the United States of America," indicating it to be a prototype model that wasn't available to standard users. Such a system would be useful for observing the effectiveness of thermal management systems, namely by blowing smoke through the case and watching its path as it gets moved by fans.

Originally sold from October 1990, the Macintosh Classic boasted a Motorola 68000 8MHz processor and 1MB of memory, expandable to 4MB, as well as a nine-inch 512x342 monochrome screen. It also housed a 40MB SCSI hard drive, a 3.5-inch floppy disk drive, and weighed in the region of 16 pounds.

It was succeeded by the Macintosh Classic II, released in October the following year.