Microsoft plans to replace Outlook for Mac with web-based version

AppleInsider
Posted: January 5, 2021 12:18PM
in General Discussion
Codenamed "Monarch," a future version of Microsoft Outlook is said to be a single cross-platform progressive web app for both Windows and Mac, potentially by 2022. 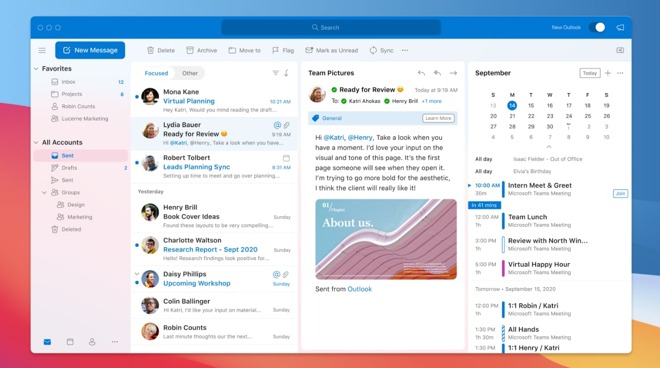 The recently updated Outlook for Mac

According to WindowsCentral, this cross-platform web app is planned as the culmination of Microsoft's "One Outlook" plan, as described in a September 2020 video presentation.

The intention is replace each of the multiple different versions of Outlook for Windows and Mac, including the separate but related Mail & Calendar app on Windows 10. Microsoft reportedly plans to make a single version of Outlook that will be available cross-platform, and also to all users, whether they are on the free service or the paid business one.

There is already an online version of Outlook that is accessible on Macs, as part of a current Microsoft 365 subscription. However, the new Project Monarch one would integrate better with whichever platform a user runs it from.

So the new Outlook would be better able to store documents on the Mac, and work with Apple's notifications.

Microsoft has not officially commented on Project Monarch. It's expected that the company will begin previewing the new Outlook toward the end of 2021. Replacing Mail & Calendar on Windows is believed to be planned for 2022.

It's not clear whether this forthcoming version of Outlook will also replace the existing iOS app. Also not clear is whether making the new Outlook a progressive web app would affect how users have recently been able to set Outlook as their default email app on iOS 14.