AppleInsider
Posted: January 13, 2021 11:15PM
in General Discussion edited January 2021
Samsung committed a tech faux pas on Wednesday when it issued a promotional tweet from an iPhone, the flagship handset made by a smartphone market arch rival. 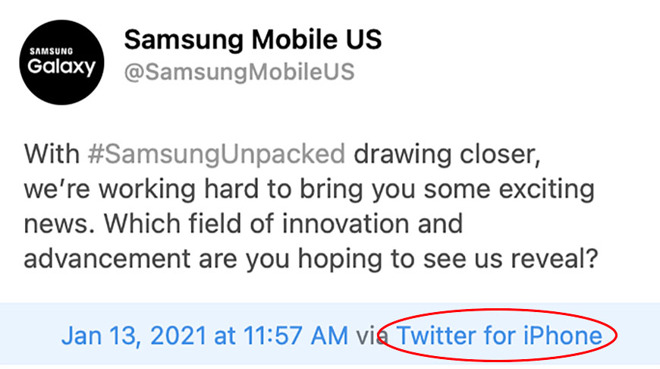 "With #SamsungUnpacked drawing closer, we're working hard to bring you some exciting news. Which field of innovation and advancement are you hoping to see us reveal?" Samsung asks in the tweet.

An innocuous message, it was the tweet's mode of delivery that has caused a bit of a stir online. Whoever posted the short missive to Samsung's account used an iPhone, an almost unforgivable offense (or hilarious gaffe) in the eyes of diehard fans.

Brand ambassadors for a number of large smartphone makers have been caught touting products and services from iPhone on a multiple occasions, but slip ups from company officials are a rarity. In 2013, for example, tennis star David Ferrer used his iPhone to send a laudatory tweet about his Galaxy S4. That same year, former T-Mobile CEO John Legere extolled the Galaxy Note 3, but did so from iPhone.

More recently, Ksenia Sobchak, who was paid to endorse Samsung products, was reportedly sued by the company in 2018 for using an iPhone X in public.

Samsung is expected to launch new Galaxy S21 models at the Unpacked event on Jan. 14. The high-end smartphones are predicted to include 6.7-inch and 6.8-inch OLED displays, S-Pen support, Qualcomm Snapdragon 888 SoC or Samsung's Exynos 2100 SoCs and other premium components in a bid to compete with Apple's iPhone 12 series.