AppleInsider
Posted: January 27, 2021 11:30PM
in General Discussion edited January 2021
Apple CEO Tim Cook says that the company has a "lot more to do," but is excited by how the first Apple Silicon M1 Macs have been received. 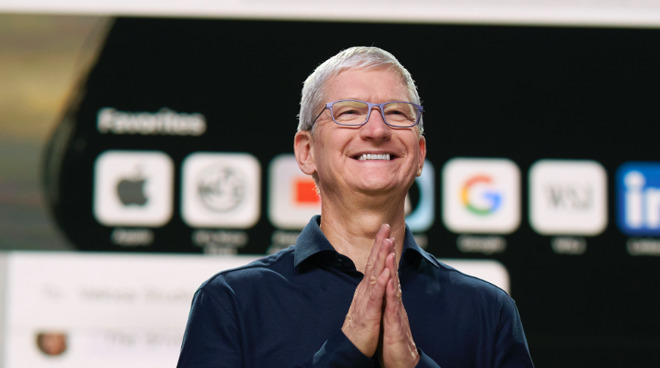 Speaking during the legally-mandated quarterly earnings call, Cook responded to analyst questions about M1 Macs, the first of Apple's computers to be powered by in-house designed silicon. Stressing repeatedly that he sees this as early days in the transition from Intel to Apple Silicon, he said that Apple is excited about progress so far.

"We're partway through the transition, and we've got a lot more to do," he said. "We're in the early days of a two-year transition, but we're excited about what we see so far."

"If you look at the switcher [from PC to Mac]," he continued, "if you look at the new-to-Mac, and new-to-iPad, those numbers worldwide are about half of the purchases coming from people that are new. So the instal base is still expanding with new customers."

"That's true on both iPad and Mac [but] if you look at the Mac, M1 I think it gives us a new growth trajectory that we haven't had in the past," he continued. "Certainly if Q1 is a good proxy, there's lots of excitement about M1-based Macs."

Apple launched its first M1-powered Macs late last year with the MacBook Air, 13-inch MacBook Pro and Mac mini. Customer feedback has been largely positive, with many touting the new computers' speed and efficiency as compared to both past Macs and Windows boxes.

The company is rumored to release a pair of redesigned, high-end MacBook Pro models with M1 chips in the third quarter, while iMac and Mac Pro could benefit from Apple Silicon later this year.