AppleInsider
Posted: February 9, 2021 1:13PM
in iPhone edited February 9
Qualcomm has introduced its latest 5G modem, the Snapdragon X65, a chip that could help provide Apple's 2022 iPhone with cellular speeds of up to 10Gbps. 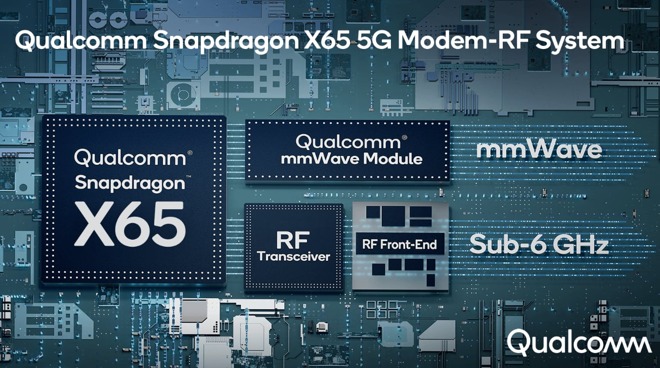 In its latest annual modem release, the Snapdragon X65 is a 5G-compatable modem that follows on from the previous model, the Snapdragon X60. The fourth-generation modem is claimed to be the first to reach 10-gigabit 5G connection speeds, which can potentially mean faster downloads to consumers if carrier conditions are favorable.

The modem is also the first 3GPP Release 16 modem-RF system, supporting the latest specification from 3GPP that offers various improvements to cellular connectivity. This includes specifications relating to power consumption and MIMO usage.

The modem is said to have an upgradable architecture to add software features and capabilities as part of the 3GPP Release 16 rollout. This can increase speeds further or introduce entirely new features.

The module is engineered to pair with Qualcomm's QTM545 mmWave antenna module pairs, which can support a higher transmit power.

There is also the bold claim of it having the world's first "AI antenna tuning technology," which could further enhance connectivity. By using AI, Qualcomm claims it can detect hand grips with 30% more accuracy, allowing the modem to switch antennas for better signal.

Qualcomm has started to provide samples of the modem to vendors, with a view to its inclusion in devices staring in late 2021.

Apple is almost certain to use the modem in a future iPhone, but its schedule for production and legal filings discussing the Qualcomm release timeline make it certain that it will appear in the 2022 model, rather than the 2021 releases. The X60 is anticipated to appear in the upcoming "iPhone 13" models.

The chip producer has enjoyed high sales due to Apple's iPhone, which it supplies Apple as part of a settlement of billion-dollar legal battles. However, Apple is known to be working on its own modem designs, which could appear in future iPhone models down the road.