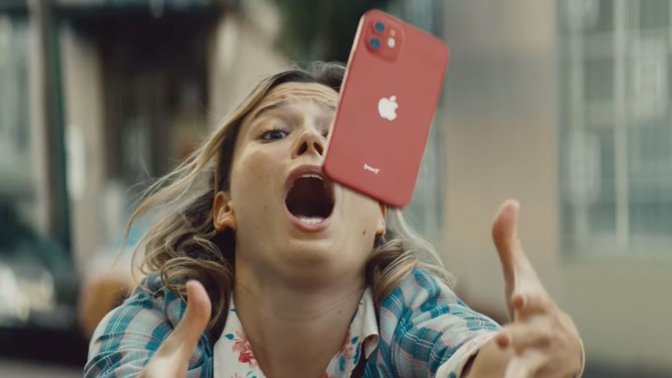 Dubbed "Fumble," the latest spot runs about 30 seconds and shows a (PRODUCT)RED iPhone 12 being fumbled -- somewhat gracefully -- onto the ground.

In the short, a woman talking on her iPhone 12 accidentally drops the device as she switches from one ear to the other. The mishap kicks off a humorous juggling routine, set to "The Conference" by Nitin Sawhney, ends in the iPhone landing screen-down in patch of dirt and rocks.

Picking up the handset, the woman is relieved to find its display unscathed.

"iPhone 12 with Ceramic Shield. Tougher than any smartphone glass. Relax, it's iPhone," the ad's tagline reads.

Ceramic Shield glass debuted on iPhone 12 and iPhone 12 Pro as a new technology in which nano-ceramic crystals are grown within a glass matrix for improved toughness. Apple claims the iPhone 12 line boasts four times better drop performance than past handsets.