AppleInsider
Posted: April 7, 2021 4:48PM
in Current Mac Hardware edited April 2021
In the middle of a campaign against Apple and its Macs, Intel appears to be promoting its new 11th-generation Core i7 processors using an image of a MacBook Pro. 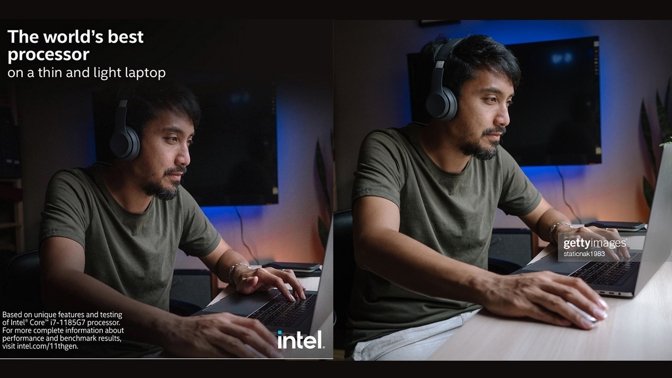 In a promoted post on Reddit, Intel touted its Intel Core i7-1185G7 chip as the "world's best processor on a thin and light laptop." The chip is part of Intel's newest 11th-generation Tiger Lake family of processors.

Love how intel uses a MacBook Pro in their ads after attacking Apple. from r/mac

The interesting part is the fact that the ad uses an image of a person using what appears to be a 15-inch MacBook Pro or 16-inch MacBook Pro. The Intel Core i7-1185G7 is not available on any current Apple portable Mac.

Digging a bit deeper, it appears that the ad photograph is a Getty Images stock photo of a "man playing [a] computer game on laptop." Despite a clumsy attempt at erasing the Apple logo, the device in the picture is still clearly a MacBook Pro, based on the I/O configuration and Touch Bar. The model's headphones are also clearly Beats by Dre.

Beyond the fact that customers can't buy a MacBook with an Intel's 11th-generation, Apple is also in the midst of shifting its Mac lineup away from Intel x86 processors to proprietary Apple Silicon chips.

Apple's M1, by most accounts, outclasses pretty much any x86 chips currently on the market -- including the Intel Core i7-1185G7. In other words, the combination of the tagline and image may actually be accurate -- but it's just not in Intel's favor.

What's even more amusing is the fact that the ad is being promoted in the midst of an Intel attack campaign on Apple's M1 chip. The chipmaker has been running ads criticizing Apple Silicon Macs and the "lifestyle company" that designs them.

The Intel ad is likely just a marketing oversight or a case of laziness. But, instead of making its own chips look any better, the blunder is more embarrassing than anything else.