AppleInsider
Posted: April 20, 2021 12:26PM
in Future Apple Hardware
Future compact and bendable iPad keyboards could gain backlighting that more evenly lights the keys, with Apple suggesting the use of light guides on a flexible substrate to direct light to where its needed. 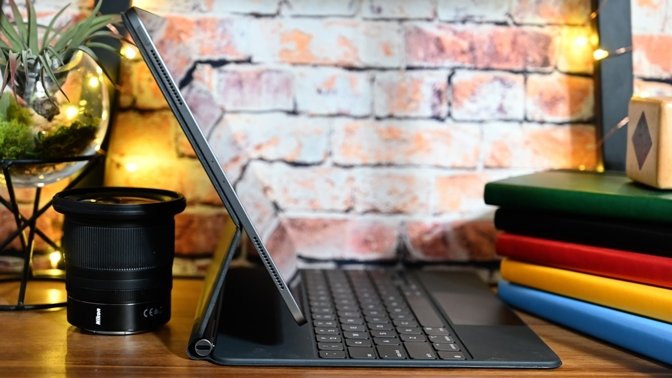 The Magic Keyboard used on an iPad Pro.

One of the features of many keyboards is the inclusion of backlighting. While decorative, the feature can be essential for some users, as it would allow the keyboard to be used at night or in dark conditions where printed key glyphs aren't easily seen.

Backlighting is generally found on rigid, fixed keyboards, as such systems usually employ a small number of LEDs to illuminate all of the keys, and such systems usually rely on fixed-in-place components. This makes it hard to include backlighting in thin and flexible keyboards, such as those used as keyboard covers for iPads and other mobile devices. And where they do have backlighting, such as Apple's Magic Keyboard for iPad, it's difficult to provide a consistent, even light across the whole keyboard.

Furthermore, Apple reckons that a uniform illumination of keys with a small number of LEDs may be complicated to implement in many cases, due to the presence of mechanisms in the keyboard that can block the path of light.

In a patent granted by the U.S. Patent and Trademark Office on Tuesday titled "Uniform illumination of keys on a flexible substrate," Apple says it has come up with ways to not only illuminate all of the keys on a keyboard uniformly, but also to do so without needing to worry too much about other keyboard components interfering.

Apple's filing describes the use of a flexible substrate with conductive traces, and a lighting element on the substrate connected to that trace. The keycaps of the keys are positioned over that flexible substrate, with each having a section that can allow light to pass through.

An example of a light guide being attached to the base of a keycap to guide emitted light.

Below the keycaps is a light guide that is attached to the light emitter, funneling light towards the window of the keycap.

Crucially, the light will continue to be guided to the keycap via the light guide, even through the movement of the components through a key press.

A second example, where the light guide is large enough to contact the lower flexible surface.

The flexible material could also allow for more complex keyboard mechanisms to be used, again without interfering with their motion. There is also the possibility of the substrate being foldable, allowing the light guides to continue functioning in multiple different positions and orientations.

While the patent may be more immediately applicable to the keyboards of the MacBook Air or MacBook Pro, it seems Apple is also considering it for other devices. One late image in the filing depicts an iPad and a keyboard cover that looks reminiscent of the Magic Keyboard but without a trackpad, a product that already has backlit keys.

While it could insinuate that the Magic Keyboard's backlighting could be improved, the image could also be taken to mean Apple could add backlighting to a thinner keyboard cover, an accessory that is typically more flexible than the average keyboard.

The patent lists its inventors as Paul X. Wang and Aidan N. Zimmerman. It was originally filed on July 11, 2018.

The flexible substrate could be employed in more complex keyboard mechanisms.

Apple files numerous patent applications on a weekly basis, but while the existence of a patent indicates areas of interest for Apple's research and development efforts, it's not a guarantee that the idea will appear in a future product or service.

Apple has previously looked at keyboard backlighting as an area for innovation. One patent application from January 2020 had Apple suggest variable color backlighting of keys could give user feedback.

Another from March 2021 used a touch-sensitive surface in the lower section of a MacBook, as well as a series of holes and lights in a flexible enclosure, to create a customizable touch surface and adjustable keyboard.

There have also been filings related to the use of "retractable keyboards" and Force Touch-based keyboards that did away with switches entirely. It also considered a "keyless keyboard" that used haptic feedback and glass panels, using a hinged OLED screen to convert an iPad into a MacBook, and turning individual keys and the trackpad into displays.