AppleInsider
Posted: May 7, 2021 5:07PM
in General Discussion edited May 7
Documents submitted as evidence in the Epic Games v. Apple trial have revealed more details about the App Store review process, including an image of a human review station. 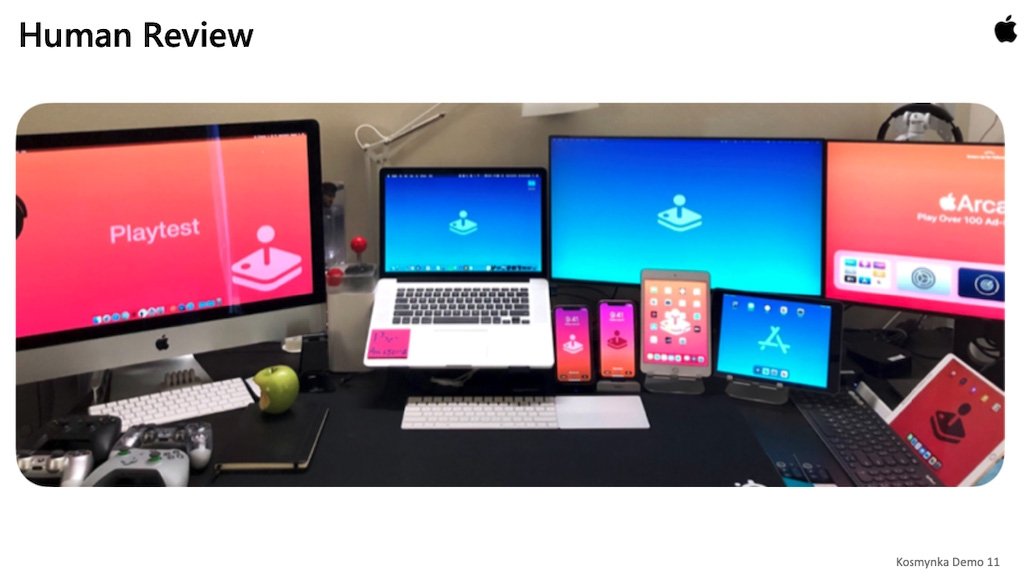 Trystan Kosmynka, a senior director of Apple's App Review team, took the stand again Friday to testify about Apple's review process. In addition to his testimony, several internal documents were also submitted as evidence. One the images in Kosmynka's demonstratives show off an human app review station, which includes a slew of Apple devices, game controllers, and other peripherals.

Among the devices are an iMac, MacBook Pro, a pair of iPhone models, a few iPads, and an Apple TV.

When asked about the variety of updates from developers, Kosmynka said that "some take hours, some up to a minute." He added that many app submissions are updates.

In 2020, the App Review director said that the rejection rate of apps in 2020 was about 40% -- higher than in past years. He said about 215,000 submissions were denied for privacy violations.

Those documents revealed some of the top reasons that apps are rejected. For example, in 14% of cases, more information is needed. In about 10% of cases, apps exhibit bugs. The documents also indicate that 60% of app reviews are updates.

Kosmynka also dove into the weeds about the intricacies of Apple's App Review process, including some of the technical details and tools that the Cupertino tech giant uses.

The App Review director's testimony Friday follows a similar time on the witness stand Thursday. During that testimony, Kosmynka revealed that Apple acquired malware detection startup SourceDNA in 2016 and that less than 1% of App Store rejections are appealed.

Kosmynka Demonstratives Epic vs. Apple by Mike Wuerthele on Scribd