AppleInsider
Posted: May 10, 2021 3:05PM
in General Discussion edited May 2021
A new dataset of actual broadband speeds that consumers are seeing in the U.S. is showing a stark disparity between Federal Communication Commission claims and the reality of the situation. 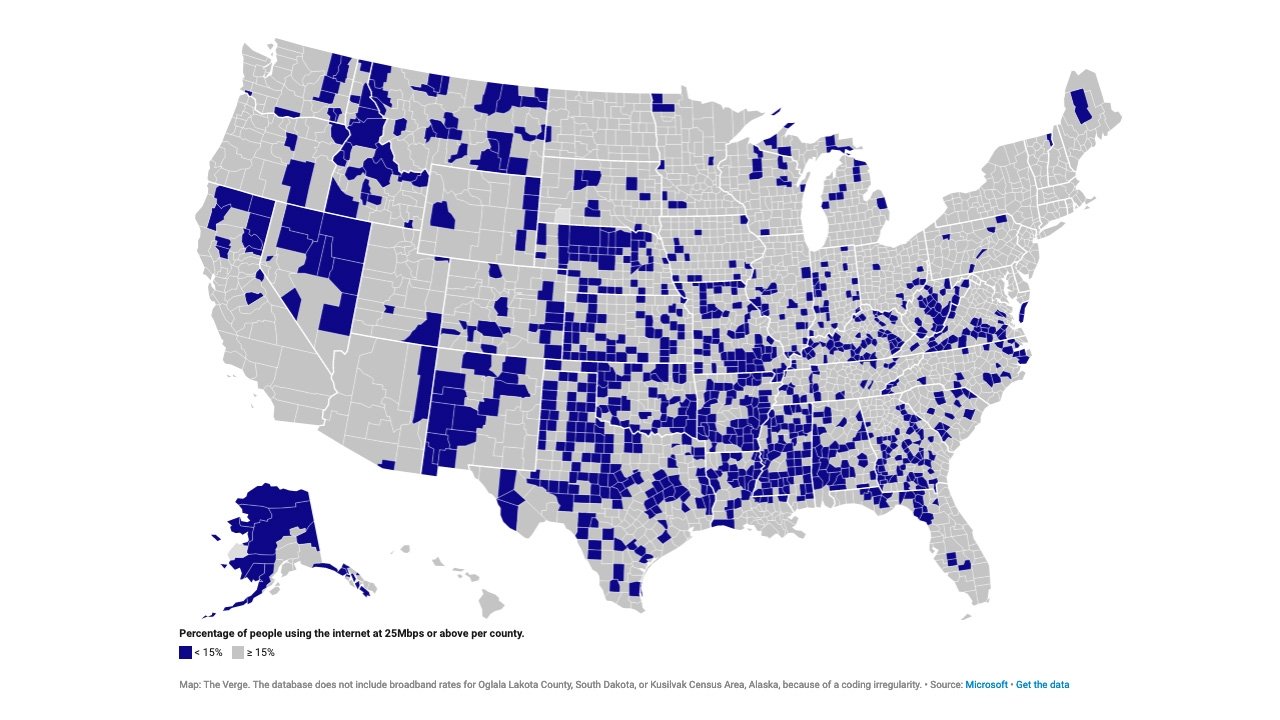 The anonymized data was collected by Microsoft through its cloud services and published over the past 18 months. The Verge used the data to create a map of the U.S. showing where the broadband problem is the worst.

The blue-colored areas are U.S. counties where less than 15% of people are using the internet at a 25Mbps download speed, which is the FCC's definition of high-speed internet.

This data conflicts with the FCC's own broadband maps, which are known to be wildly inaccurate. That's largely because the FCC relies on self-reported data from internet service providers on the areas they serve.

In Lincoln County, Washington, for example, the FCC data says that only 100% of households have broadband internet speeds. The Microsoft data seen by The Verge indicates that the rate is closer to 5%.

Alongside the speed disparities, the Microsoft-based map also shows the severity of the broadband problem in certain states. Most of Alaska is a dead zone, while nine counties in Nevada fall under the 10% threshold. Similar gaps in broadband coverage exist in New Mexico or central Texas.

The data shows broadband usage, which doesn't draw any distinctions between areas where higher speeds aren't available or areas in which the people can't afford faster connections. In Apache County, Arizona, broadband usage clocks in at about 5%. Among the 70,000 that live in the county, about 23,000 are in poverty -- the highest poverty rate in the state.

There are signs of change on the horizon, however. President Joe Biden has proposed investing $100 million in broadband funding as part of his American Jobs Plan. A bipartisan group of U.S. senators earlier in 2021 called upon the FCC to dramatically boost its definition of high-speed internet.

In March, the FCC also announced an initiative to collect broadband speed and access data directly from consumers. That data will be used to create service maps to use as evidence for proposed regulations.
«12»