AppleInsider
Posted: June 15, 2021 2:55PM
in General Discussion edited June 28
With the launch of the Beats Studio Buds, Apple now has a total of four wireless earbuds it sells to consumers. Here's how the newcomers face against AirPods, AirPods Pro, and Beats Powerbeats Pro. 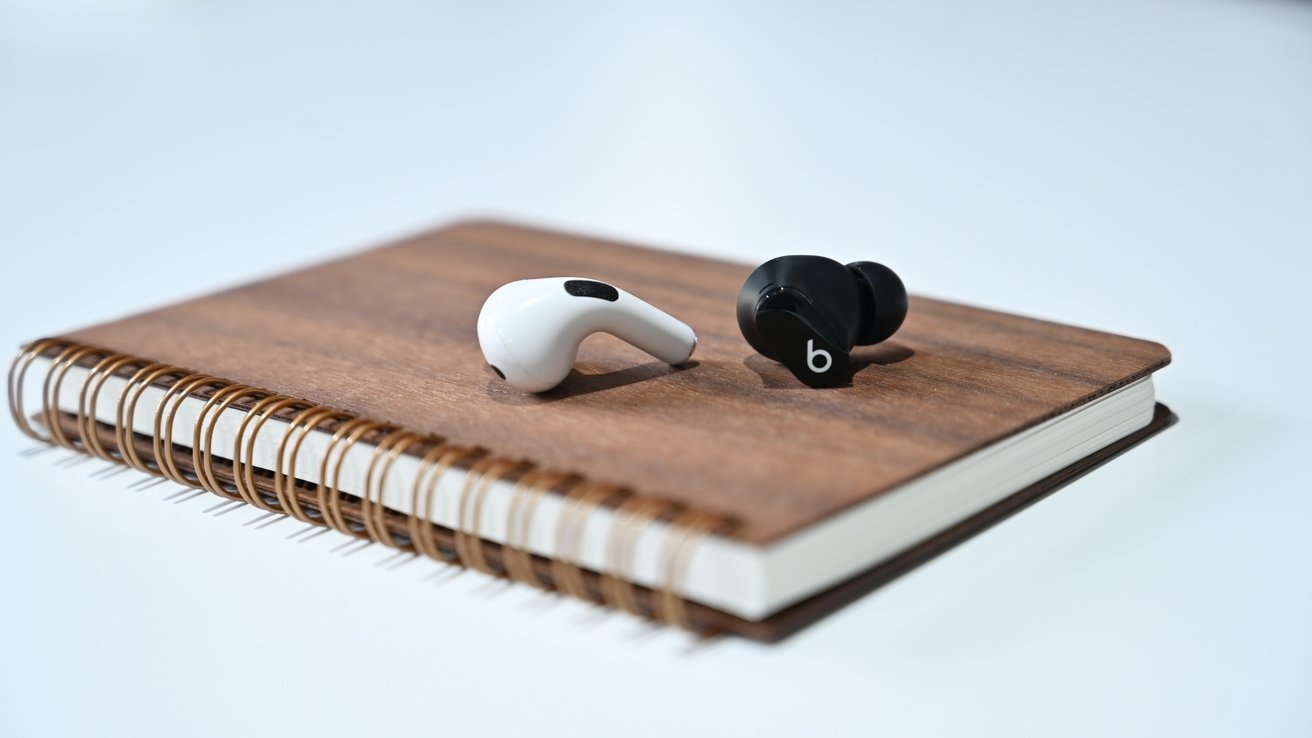 On Monday, Apple launched its latest wireless earbuds product, via its subsidiary Beats by Dre. The Beats Studio Buds are very compact earbuds without wires, but with Active Noise Cancellation, putting it in the same category as the AirPods Pro.

However, the Studio Buds also do this at the same time as cutting down the size and price, making them considerably cheaper to purchase. This also means there are some differences in what they can do.

So, given that Apple already offers AirPods, AirPods Pro, and Beats Powerbeats Pro as truly wireless earphones, it takes a moment to work out where Beats Studio Buds fit into the product landscape. For some budget-conscious consumers, they may even be a better purchase than AirPods. 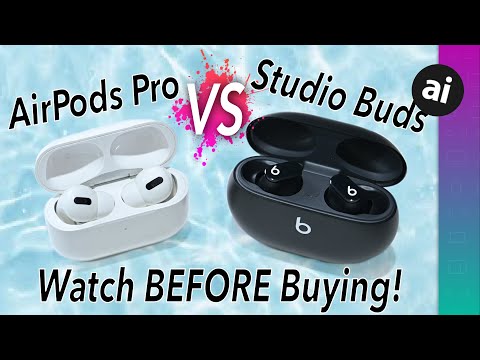 Of the quartet, it's fair to say that the Beats Studio Buds are the smallest option by far, with the other three being extremely near or longer than an inch in at least one dimension, potentially two. The Studio Buds are a mere 0.8 inches by 0.73 inches and 0.59 inches thick.

The other three are bigger because they include extra elements in their construction. Both the AirPods and AirPods Pro have the downward-descending stalk that adds length to the body.

The Powerbeats Pro turns out to be the largest by far, as while it doesn't have a stalk, it does use an ear hook. The hook does offer considerable security in making sure they are hooked onto the ear, making them ideal for fitness and activities. 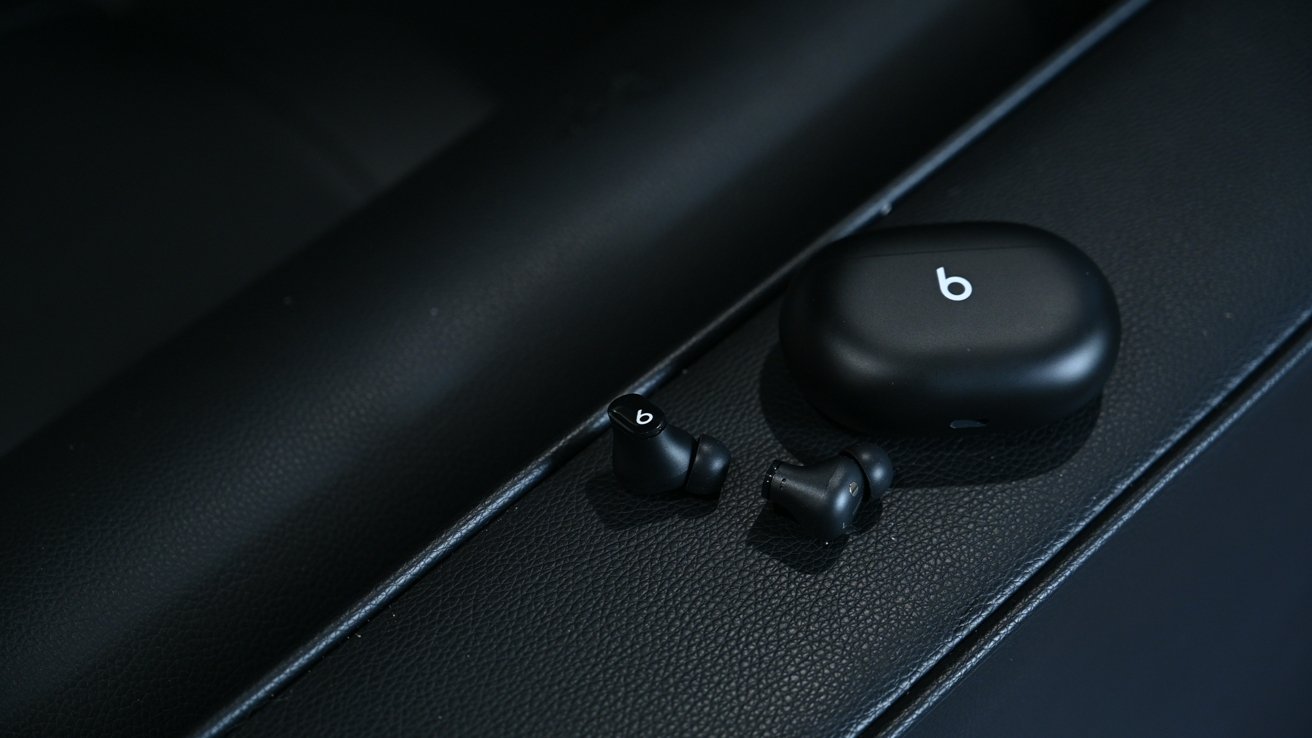 The lack of stalks or an ear hook help keep the Beats Studio Buds compact.

The extra mass also factors into the weight of each earbud, with the Powerbeats Pro tipping the scales at 0.38 ounces. While smaller, the Studio Buds are the second-lightest at 0.17 ounces, narrowly ahead of the AirPods Pro at 0.19 ounces.

AirPods are the lightest overall, with each earbud weighing in at 0.14 ounces.

Securing the earbuds in place is also performed using an interchangeable silicone ear tip, one that wedges into the ear canal to hold the earbud in place and helps provide noise isolation. Again, there is an odd-one-out situation here.

The AirPods omit an eartip, whereas the other three do. Instead, the AirPods rely on the design of the head of the bud residing in the ear canal, without the same sort of pressure as a silicone eartip would provide.

All four products include a charging case, used to recharge the earbuds while on the move. They all essentially work the same way, though with some differences in how they regain power and their dimensions.

Naturally, for the largest earbuds, the Powerbeats Pro also have the largest case, measuring 3 inches by 3 inches and 1.7 inches thick. It's also the heaviest at 2.82 ounces. 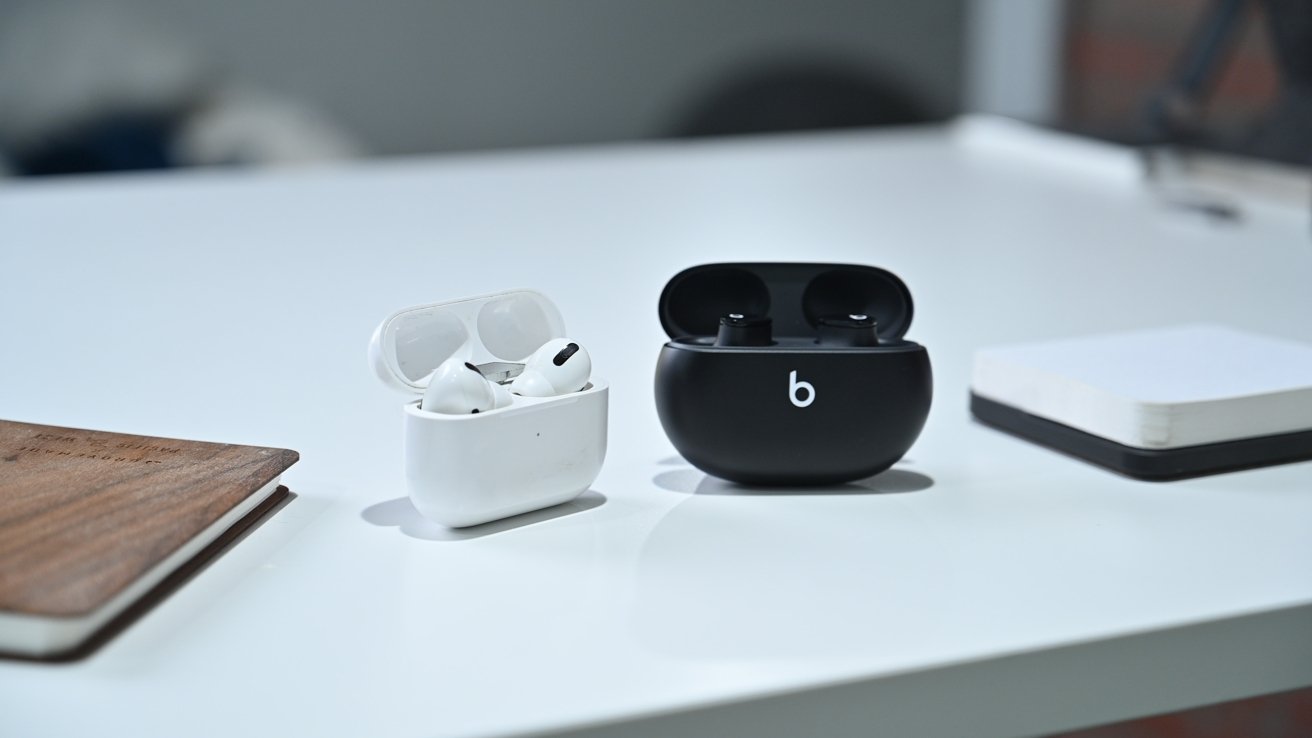 Beats Studio Buds have larger cases than its AirPods counterparts

Recharging the cases is marginally different for the Studio Buds, as its case is the only one to have a USB-C port, whereas the others use Lightning.

Neither Beats case offers wireless charging capabilities. AirPods Pro ships with a Qi-compatible Wireless Charging Case, though that is optional for the AirPods.

Of the four, only two of the earbuds offer Active Noise Cancellation: AirPods Pro and Beats Studio Buds. Neither the AirPods nor Powerbeats Pro have ANC, though the latter's silicone ear tips help provide some noise isolation.

ANC is where the earbuds monitor external noises using a set of microphones monitoring the outside world, create a noise signal that can counteract the environmental sounds, then play that anti-noise to the user alongside content. 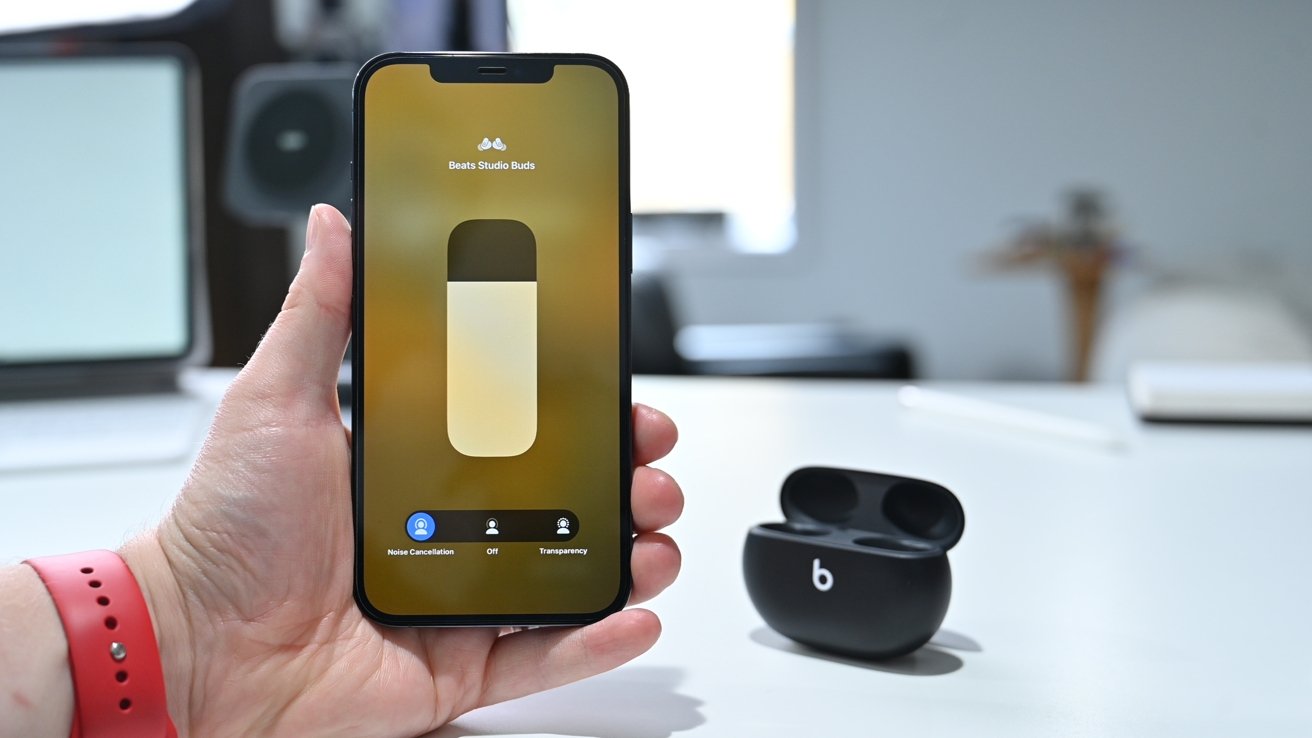 While AirPods Pro also uses a user-facing microphone to assist with this process, Beats Studio Buds does not include an inward-facing version of its own. This may affect the quality or the processing of ANC signals, though it remains too early to tell at this time.

Both earbuds include Transparency, Apple's system for providing ANC but allowing some specific sounds to be filtered. Announcements, sirens, alarms, and other audio that someone may want to hear can get through the filter and be heard by the wearer.

After a few days of testing, Beats Studio Buds has audio quality most similar to Apple's AirPods, falling shy of both AirPods Pro and Powerbeats Pro. Sound isn't quite as rich and full on the Beats Studio Buds, at times sounding a bit hollow in comparison.

This could have multiple reasons, including a less-powerful driver, the lack of Apple's H1 audio processor, and the lack of an inward-facing microphone.

Beats is using a custom processor, but not the H1. This processor helps with many aspects of the headphones, including audio quality. The inward-facing microphone also comes into play. This mic is used to tune the audio to your specific ears so it sounds as close to the original as possible. This can make a big difference in terms of audio reproduction.

AirPods Pro and Powerbeats Pro both have more dynamic sound and more bass. This isn't a surprise as Beats Studio Buds are much more closely positioned price-wise to the standard AirPods. It isn't quite trying to compete with the AirPods Pro or Powerbeats Pro in terms of audio fidelity. 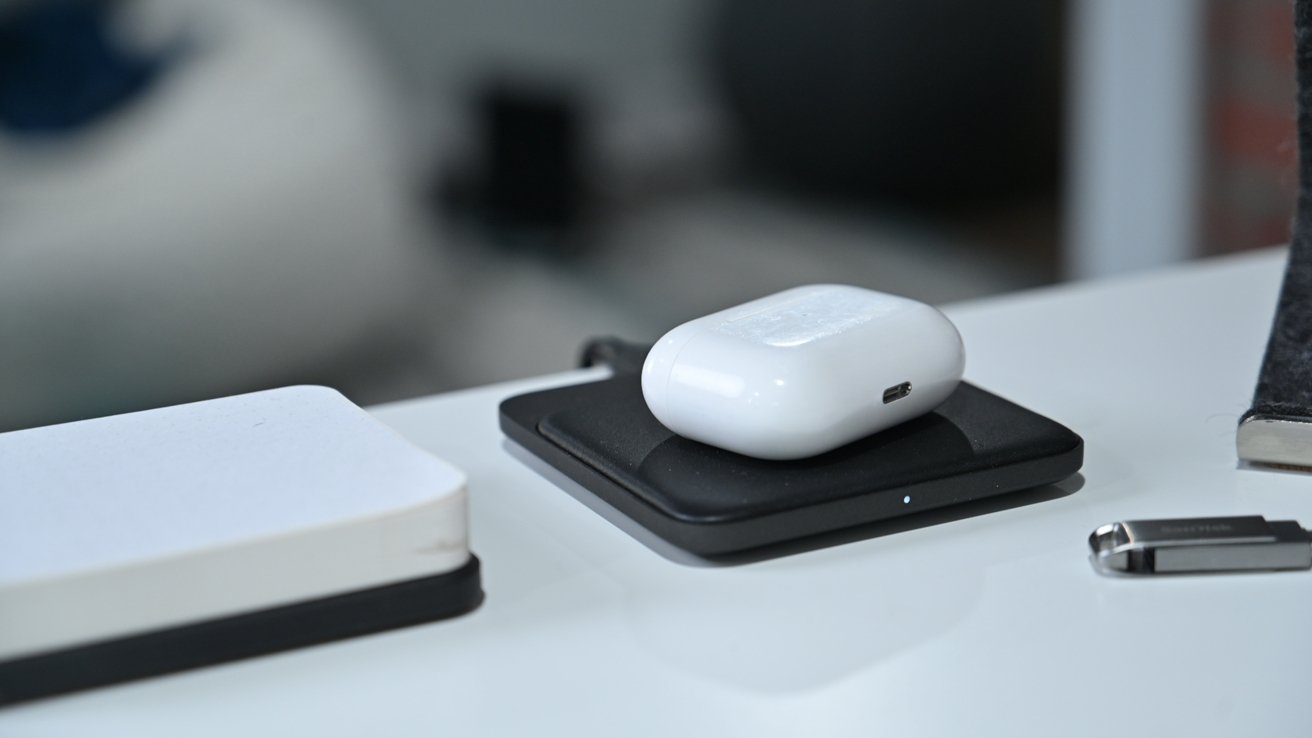 The ANC drop is less pronounced for the AirPods Pro, which goes from 5 hours to 4.5 hours of life under ANC, though the lower usage time works against AirPods Pro's favor.

On the non-ANC side, AirPods offer a similar 5 hours of usage between charges, while the Powerbeats Pro leads the pack with 9 hours of battery life.

When used together with the supplied recharging cases, the group all offer similar battery lifetimes. For AirPods, AirPods Pro, and Powerbeats Pro, it's marketed as "more than 24 hours," while Studio Buds is "up to 24 hours."

Even with this distinction, the key thing is that it's around 24 hours of usage regardless of model. 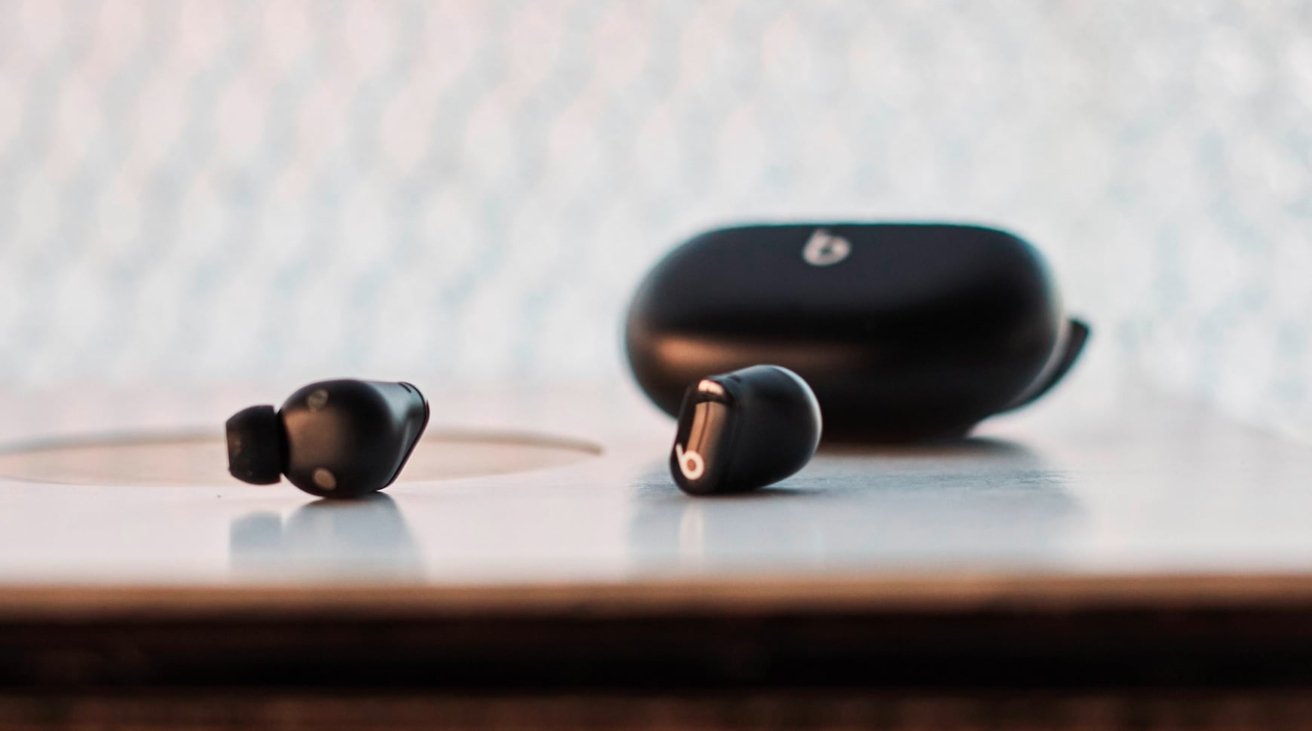 Just like the others, you can get an hour of playback for 5 minutes of in-case charging for the Beats Studio Buds.

There's also not much difference in terms of quick charging. The AirPods Pro, Studio Buds, and Powerbeats Pro all manage an hour of playback following a five-minute charge, which Beats brands as "Fast Fuel."

Apple describes the recharging of the AirPods as being 3 hours of playback after a 15-minute charge, which is practically comparable to the others on a per-hour basis.

Despite Beats being an Apple brand and using Apple's W1 and H1 wireless chips in its products, it went a different route for the Studio Buds. Instead, it used a custom chip to perform its wireless connectivity duties.

This could be considered a potential issue for the Studio Buds, but Beats manages to include many features and functions you would expect from an H1 or W1-based device.

What you get are things like "Hey Siri" support, quick pairing with an iPhone, support for the Find My network, and integration with iOS, which are all offered across the board of devices.

You also have Dolby Atmos support via the Spatial Audio feature of Apple Music and other elements of the Apple ecosystem.

However, there's support for many features, but not all.

That lack of W1 and H1 means the pairing of devices will be practically seamless for the other three, but for the Studio Buds, there's a one-touch pairing system instead. This also extends to if you want to use the earphones on other Apple hardware, as you can quickly switch between devices for all of them automatically, except for the Studio Beats.

You also lose out on a feature where the earbuds automatically pause and play music when you remove them from your ear or place them back. That ear detection is present in the AirPods, AirPods Pro, and Beats Powerbeats Pro, but not Studio Buds.

As for that Dolby Atmos support within Spatial Audio, it's only to allow Dolby Atmos file playback specifically, but not the full-featured Spatial Audio with head tracking. Apple has previously confirmed only the AirPods Pro of the quartet will have that feature due to its built-in gyroscopes.

If you want to use the earbuds in light misty rain or during workouts, your best bet are the AirPods Pro or the Beats Pair, as all three have IPX4 sweat and water resistance. AirPods lacks this feature entirely, making them less suitable for keeping fit.

Apple has also reserved the force and touch-sensing controls for its AirPods lineup. On Beats, you're using plain ol' buttons on each earbud. 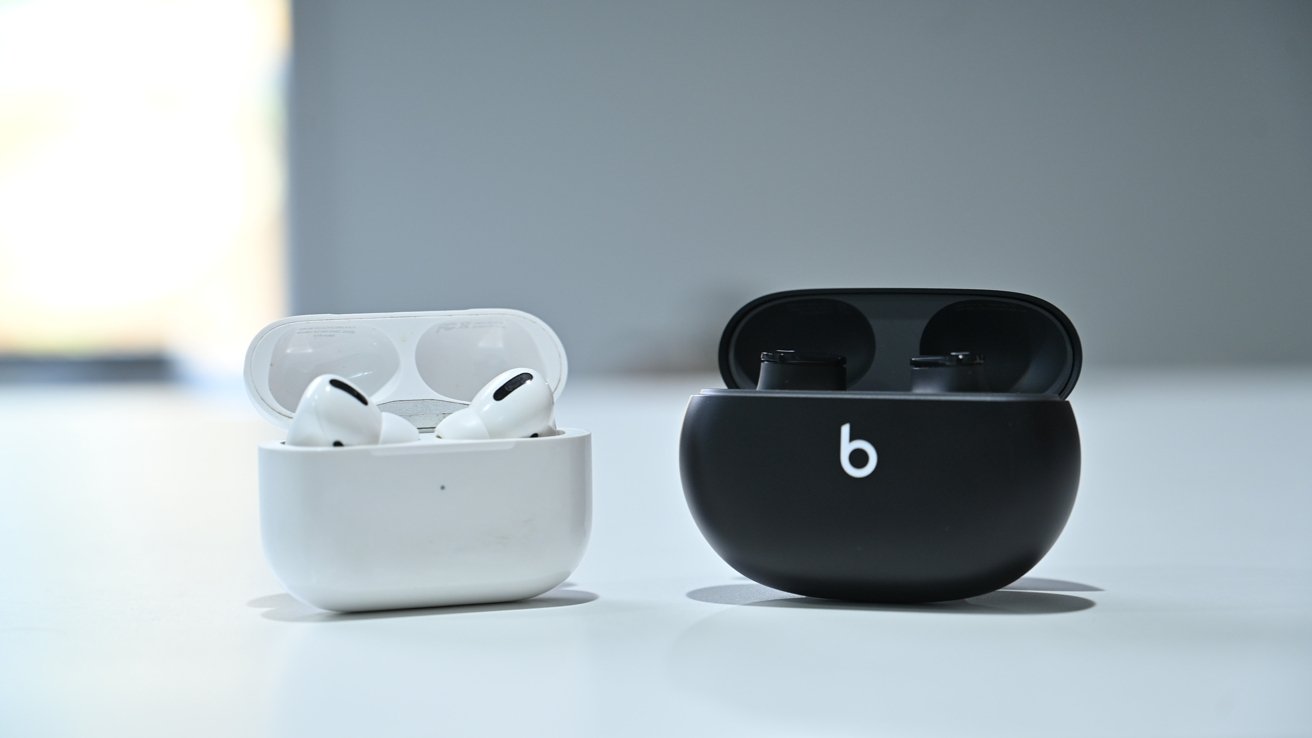 Apple has also restricted the color scheme for the AirPods lines to its signature white, leaving consumers to look at aftermarket solutions to skin the earbuds or the cases a different color. 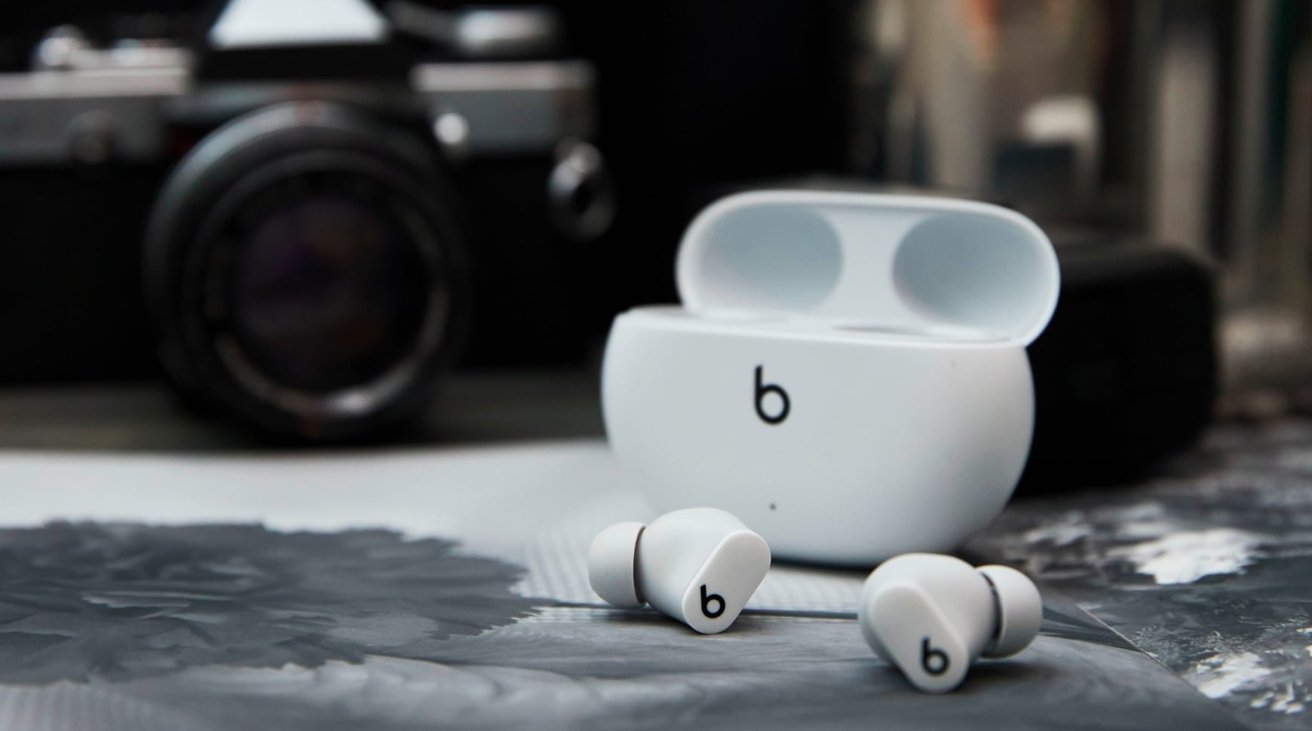 You could get the Beats Studio Buds in white if you want to mimic the AirPods aesthetic.

Beats offers all of its products in a variety of colors. The Powerbeats Pro is available in six core colors, as well as occasional limited-edition patterns, such as its recent Faze Clan promotion.

The Studio Buds seem somewhat limited, in a choice of black, white, or "Beats Red," but Beats does update its range with new color options over time. There may be far more versions of Studio Buds to choose from in the future, but even having three at launch is a better selection than the AirPods lines' one.

Apple does give you the option to engrave the AirPods and AirPods Pro cases for free, so there is an element of personalization on offer. Just not color.

One of the Beats Studio Buds striking features is its price, as it is shipping for $149.99. Beats effectively provides ANC-enabled wireless earphones for $100 less than the $249 Apple charges for AirPods Pro.

It's also less than the $159 you could pay for AirPods with the standard Charging Case. If you want the Wireless Charging Case, that's an extra $199 as part of the purchase or as a $79 purchase later on.

The Beats Powerbeats Pro usually cost $249.95, but they are currently subject to a "limited time offer," bringing the price down to $169.95.

Small and mighty, and cheap too

It is tough to knock the Beats Studio Buds. On the face of it, users may think they offer AirPods Pro-style features at a considerably cheaper cost, and that's mostly correct.

That sentiment is wrong is in particular ways, namely the lack of an inward-facing mic, no in-ear detection, and no automatic switching between devices in use. But these are minimal complaints given that the retail price on the Beats Studio Buds are sold for $100 less than Apple's natural competition.

It's also remarkable to consider the product's price given that it is cheaper than the AirPods, which doesn't include that big-ticket item, ANC.

But since Beats Studio Buds brings so much to the table to begin with, it'll probably be a worthwhile tradeoff for most.