AppleInsider
Posted: July 15, 2021 3:21AM
in General Discussion edited July 2021
Apple is once again teetering on the brink of abusing its own iOS push notification mechanism for advertising purposes, with a pop-up on Wednesday promoting Apple TV+. 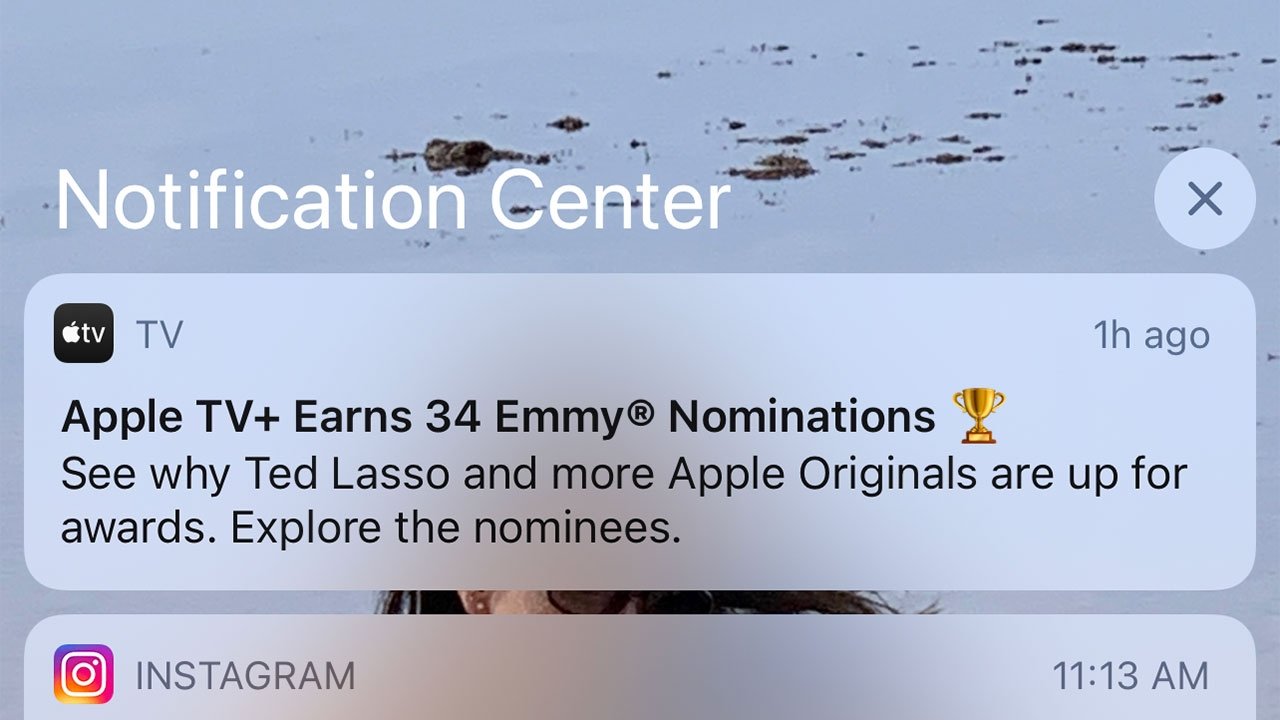 On Tuesday, Apple issued a press release touting its 35 Emmy Award nominations, most of which are counted among an impressive haul for comedy series "Ted Lasso."

A day later, a push notification from the Apple TV app appeared on the iPhones and iPads, urging users, including existing subscribers, to "see why Ted Lasso and more Apple Originals are up for awards."

Tapping on the notification opens to the Apple TV+ Originals section of the TV app, which is festooned with promotional artwork that now incorporates Emmy Awards information. "Ted Lasso" is, of course, featured prominently in the section's top show card carousel, a larger carousel farther down the page and in a permanent interactive section that includes clips from season two.

A notification from Apple was once a rarity and as such was something worth observing. That began to change in 2018 when the company started to push promotions for iPhone upgrades, new Apple Music content, and, quizzically, Apple Music's then-new compatibility with Amazon Echo devices.

Now, Apple Music uses the system to recommend new music, while Apple TV+ advertises new shows and premieres. When iPhone refresh season arrives, the company will likely spit out messages to spur upgrades through the iPhone Upgrade Program or perhaps announce the device itself. The notifications are now routine, something to be expected, but for some users, today's feels particularly intrusive.

Section 4.5.3 of Apple's App Store Guidelines prohibits developers from using Apple Services to "spam, phish, or send unsolicited messages to customers, including Game Center, Push Notifications, etc." The following section says, "Push Notifications should not be used for promotions or direct marketing purposes unless customers have explicitly opted in to receive them via consent language displayed in your app's UI, and you provide a method in your app for a user to opt out from receiving such messages."

Users can disable notifications in Apple TV settings, and on a granular basis for categories "Up Next," "New Features" and "Featured Sports." Where a message like "Apple TV+ earns 34 Emmy Nominations" falls within those parameters is less clear.

Today's message is not surfacing new content to consume, announcing a new feature or informing users of an important system alert. It is, in effect, Apple tooting its own horn.