AppleInsider
Posted: August 20, 2021 12:01PM
in iPhone
Emails discovered during the Epic versus Apple suit surrounding app stores have revealed that Epic's marketing head pitched and ultimately funded the Coalition for App Fairness creation as a tool to help press coverage and rally support for its cause. 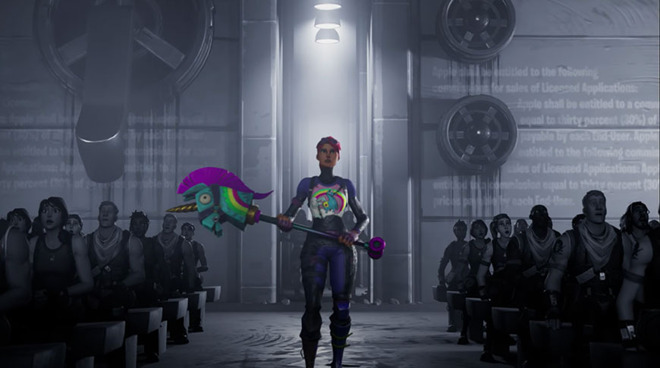 On May 15, 2020, Epic's Vice President of Marketing Matt Weissinger rounded up why Epic should form a coalition of like-minded developers. Saying in the email that "Epic is not sympathetic," Weissinger also said that if the company realigns its focus on "developers that suffer from those attacks."

In the email, Weissinger said that Epic should build a 501c4 coalition, have an agency from public affairs to manage it, come up with a list of advocacy points, and "add some other issues" besides getting rid of Apple's commission on app sales.

In the email, Weissinger suggested that Epic take the "nuclear option" to fire up the suits and coverage. Originally, Epic expected to spend up to $700,000 over the life of the Coalition.

Also disclosed in the massive data dump, and first published by The Verge, is a contract between Epic Games and The Messina Group -- a consulting firm for the foundation of the coalition. While it says that the coalition should be discrete from Epic, the day-to-day operations of the coalition will be fed through Epic's head of marketing. 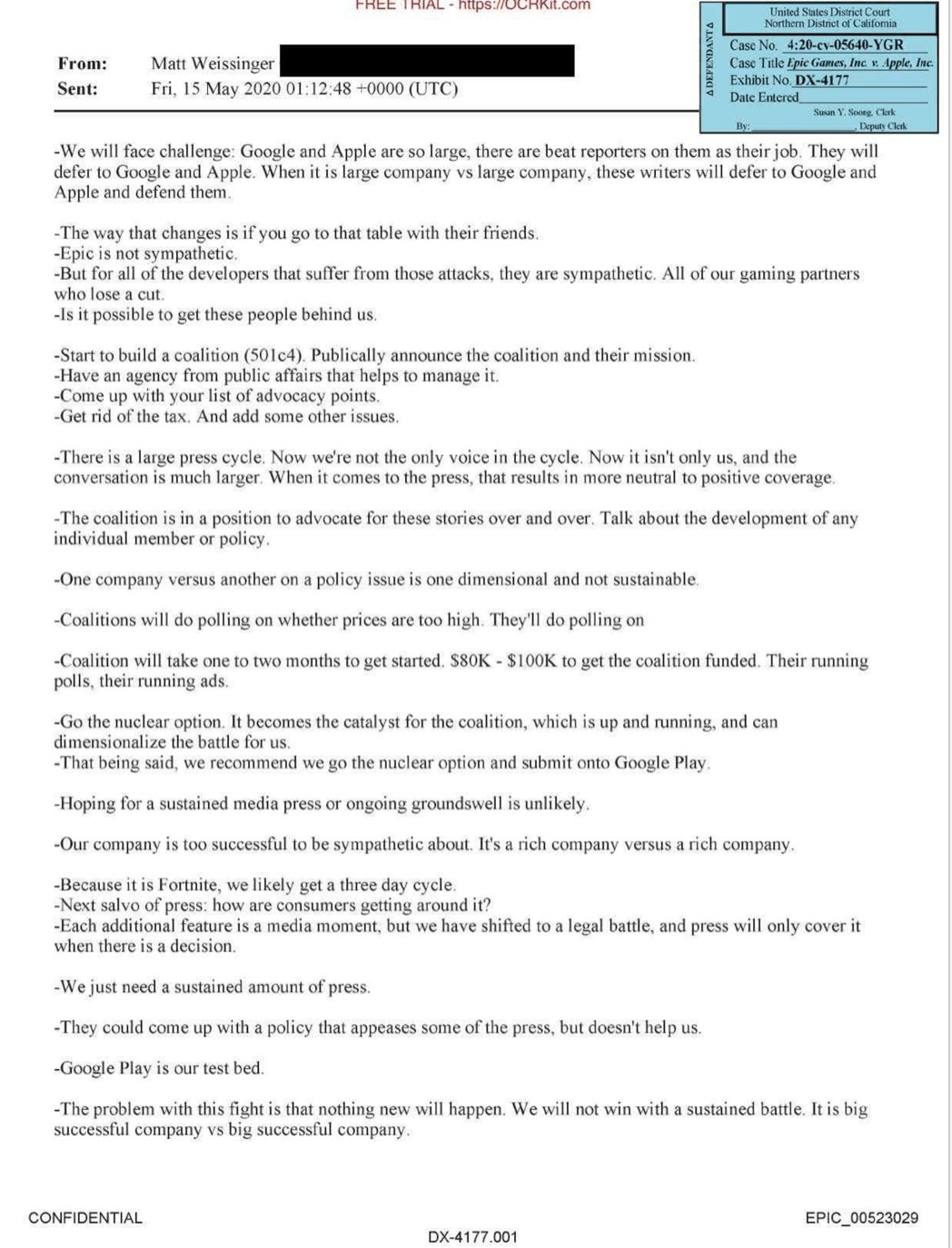 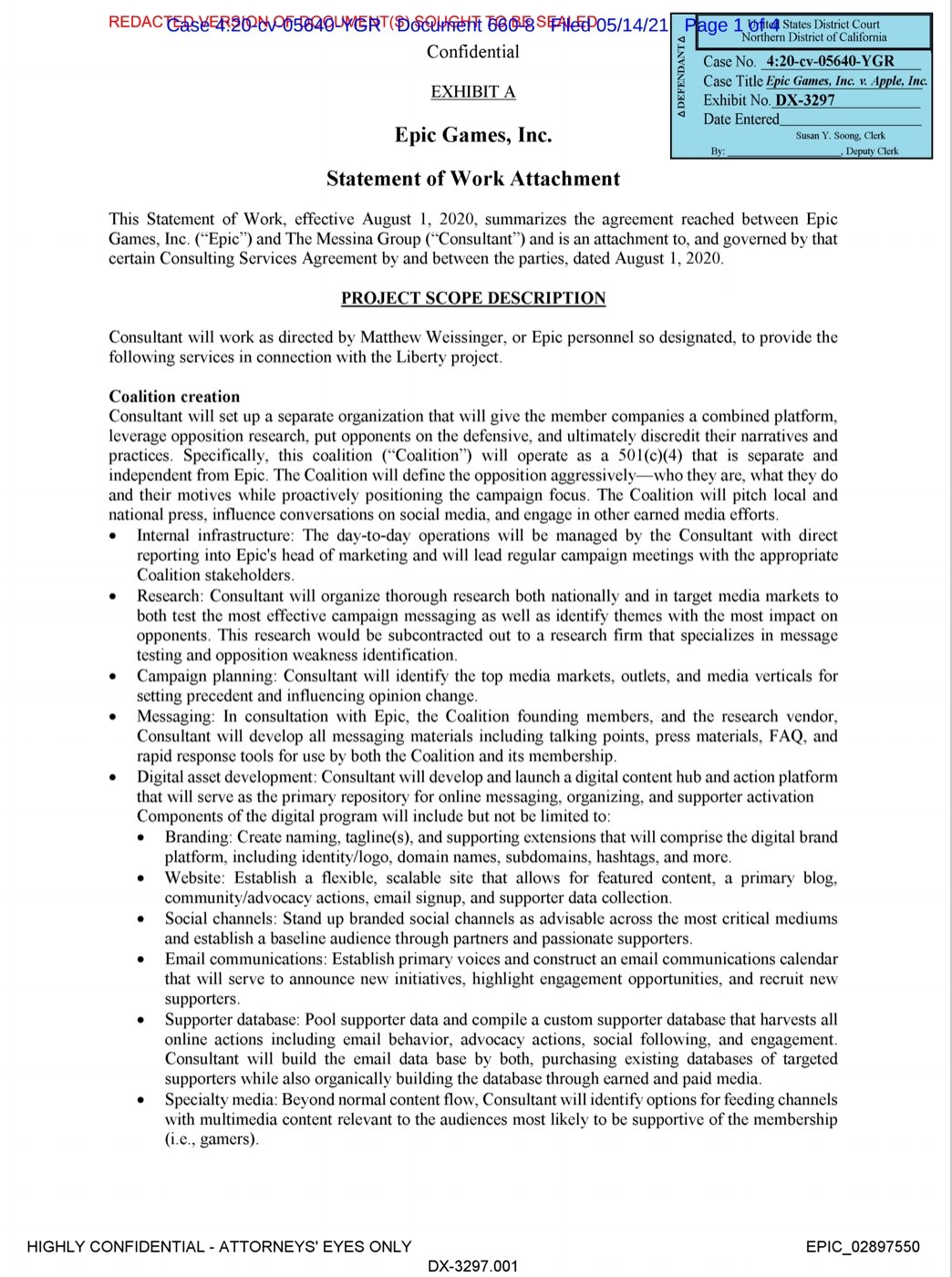 Spotify apparently claims that Epic versus Apple, and other suits are not included in its business, however public messaging makes that less clear. The Coalition has talked about the suit on social media, but it does not appear to have a large amount of material regarding the suit on the site itself or in other media materials.

The main triggering event for this entire saga occurred on August 13, 2020, when Epic updated the "Fortnite" app with a new feature, one that allowed consumers to pay Epic directly for in-app currency at a discount, rather than paying traditionally via Apple's App Store payment mechanism. Offering the option enabled Epic to skirt App Store rules that demanded payments for in-game currency go through the App Store payment system, paying a 30% fee in the process.

The change was not limited to just the iOS version of the game. It was similarly applied to the Android version, again going against the Google Play Store's similar policy and fees.

The same day as the removal, Epic filed a lawsuit against Apple in the U.S. District Court for the Northern District of California, in retaliation for pulling the game. It laid another lawsuit against Google for its "Fortnite" removal.

The Coalition for App Fairness was launched on September 24, 2020.

"We believe that every app developer is entitled to fair treatment and that every consumer should have complete control over their own device. Our App Store Principles will ensure a level playing field for platforms like Apple and a consistent standard of conduct across the app ecosystem," the Coalition said at the time of founding. "The 10 principles outlined include that every developer should always have the right to communicate directly with its users through its app for legitimate business purposes and that no app store should charge unreasonable or excessive fees."

The coalition is still asking more developers to join its ranks.