AppleInsider
Posted: January 27, 2022 4:41PM
in iPhone
With a price tag pushing $60, Belkin has a lot to prove with its inelegantly-named BoostCharge Pro Portable Wireless Charger Pad for MagSafe. 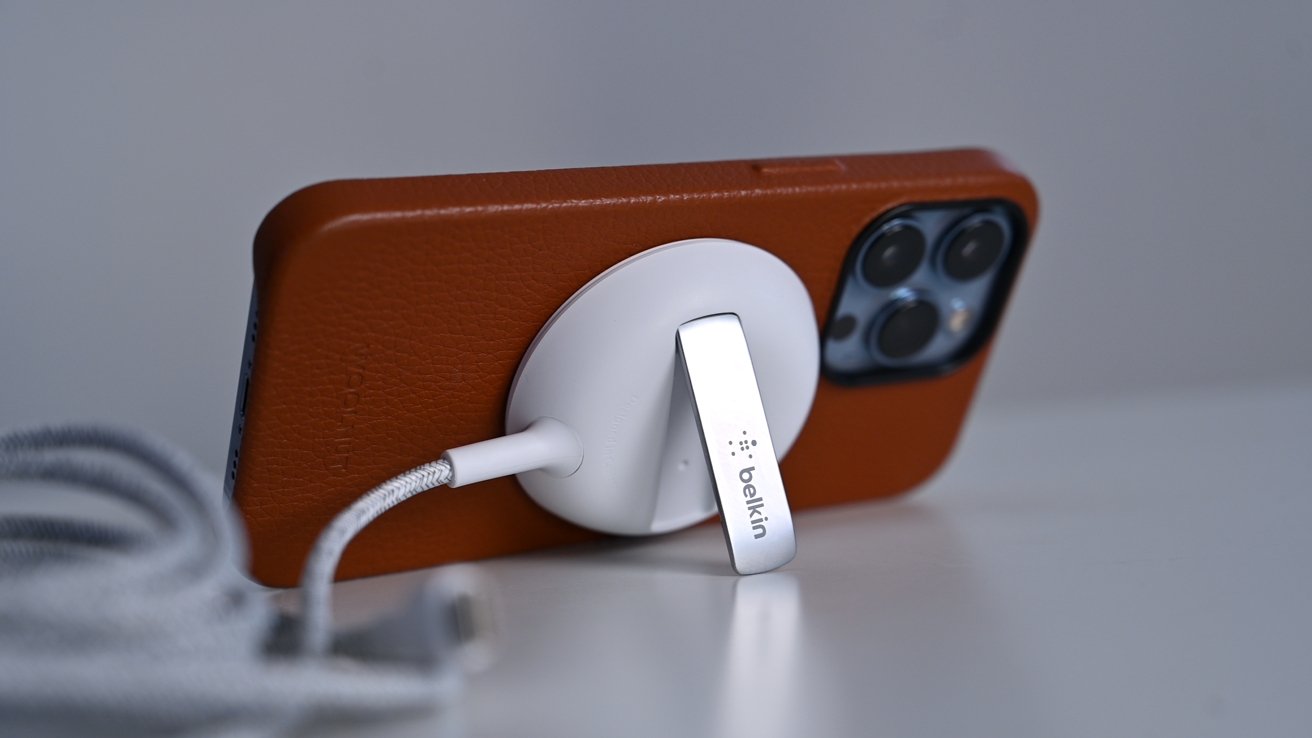 It's taken well more than a year from MagSafe's initial introduction to get our first third-party MagSafe cable. In that time we've seen the market inundated with cheap Qi chargers surrounded by magnets that pale in comparison to the real thing. This isn't that.

Belkin worked directly with Apple to utilize official MagSafe components and received MFi certification in the process. This guarantees the highest degree of compatibility and will give you no issues with performance.

Apple has been playing things close to the vest as it doles out certification for MagSafe products and thus far only a small handful have become available from Belkin as well as Mophie.

Maxed out on MagSafe 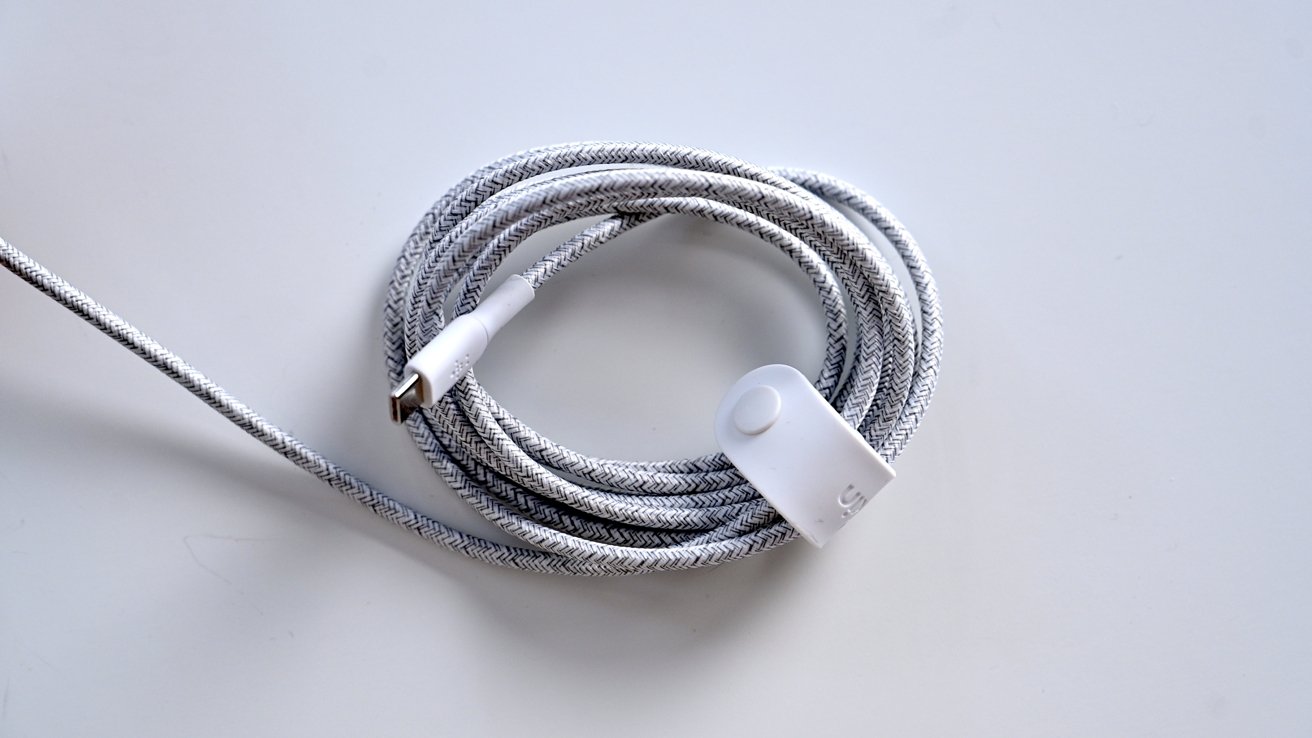 Apple uses its typical white rubber-like material on the official MagSafe cable. Belkin rather has a thicker, nylon-braided cable that runs two meters, or roughly six feet. To help manage that cable, it features an integrated silicone cable tie with a plastic snap.

This cable tie is great to have but it is a little loose. We'd have preferred to see an adjustable tie that could be tightened to hold just part of the cable at once. 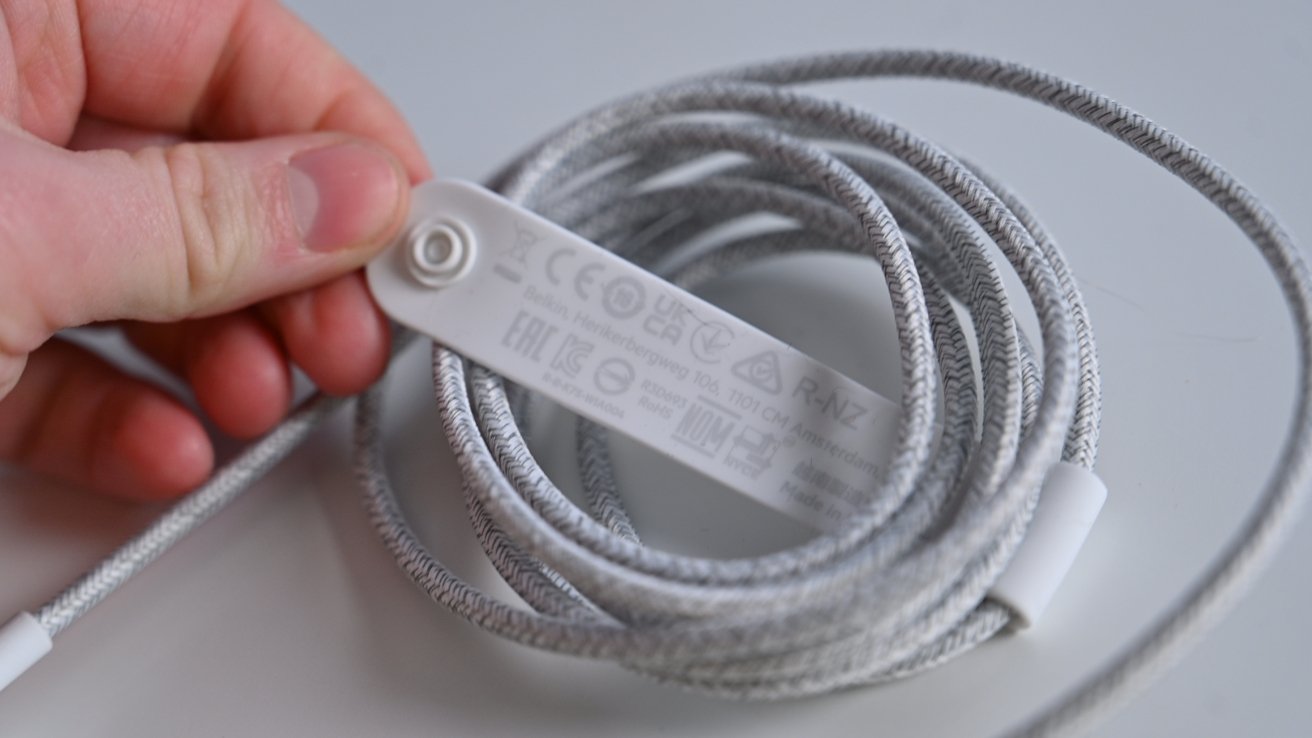 Upon examining the BoostCharge Pro pad for the first time, we loved its unblemished exterior. We then realized it had no regulatory information that is a requisite on consumer electronics. In what is a decidedly Apple-like move, Belkin hid all that information on the inside of that cable tie.

It's a subtle but welcomed touch.

As it uses an official MagSafe puck, it can deliver up to 15W of wireless power to your iPhone 12 or iPhone 13 device. You'll need to provide a USB-C power adapter, just as you do with Apple's. It needs to be at least 20W to achieve the 15W maximum. 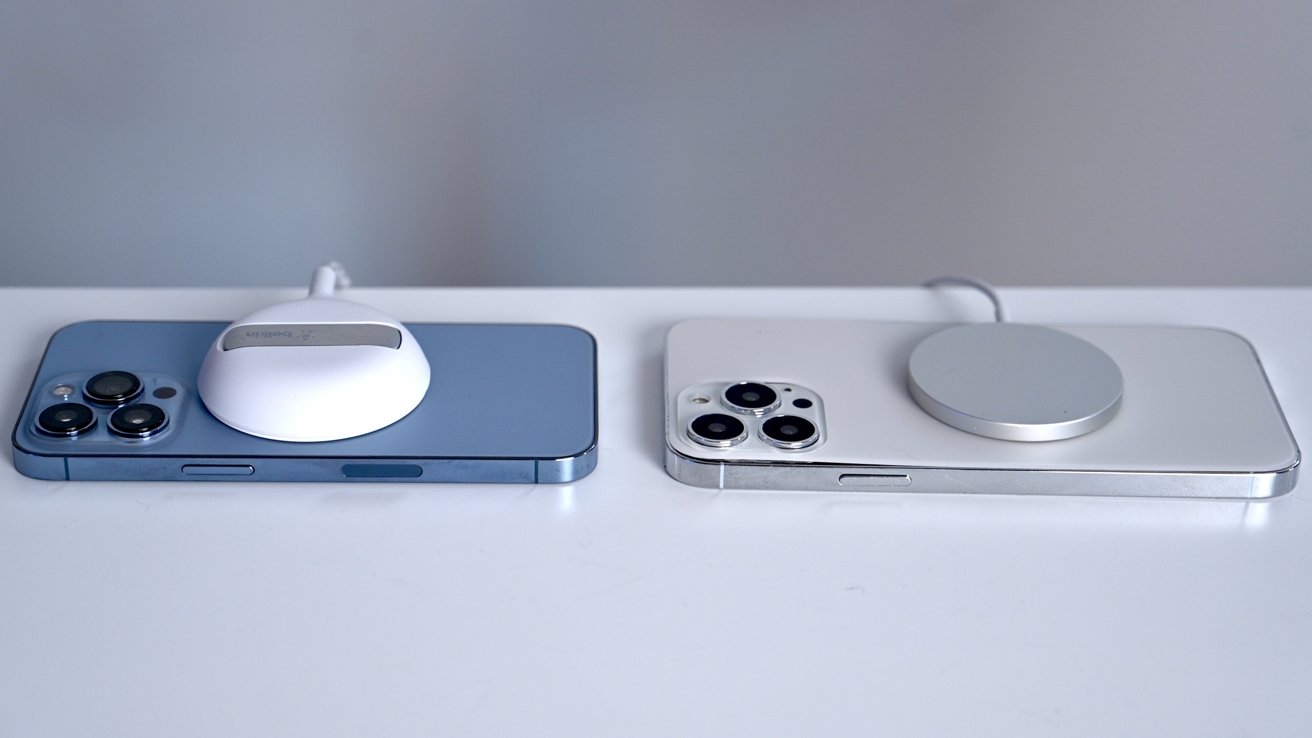 It's a bit larger than Apple's, which turns out to be a good thing. The added girth makes it much more comfortable to hold in your hand, even if it does take up a bit of extra space.

Since it is thicker, Belkin built in a metal kickstand. It pivots outward to prop up your phone on your desk, nightstand, or in bed. This is a perfect addition to the magnetic charger and comes as no surprise when other magnetic Qi chargers have been doing this for months. 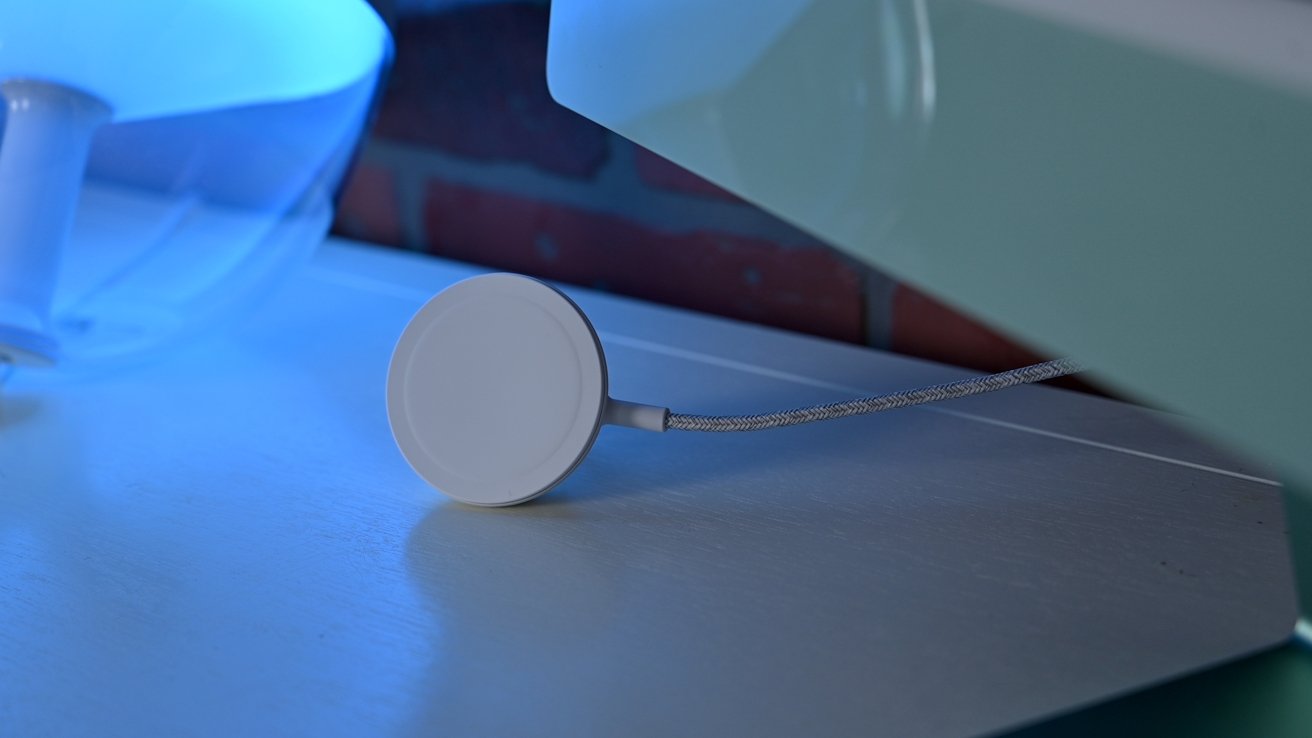 Belkin's puck on our desk

Belkin does do it better, though. It clicks into place so it won't fall out, has a soft matte finish to the outside, and only has a small Belkin logo on the bottom.

It still begs the question of how Belkin got to the lofty price of $59. We see it like this.

Apple's official MagSafe puck is $39 for a shorter one-meter length. Belkin has doubled that two a lengthy two meters. Additionally, Belkin has opted for that nylon cable, a custom cable tie, and built-in kickstand. All of this contributes towards the $20 premium over Apple's cable that Belkin has chosen to apply.

But Belkin also has additional costs compared to Apple. We don't know the full requirements that Apple imposes upon its MFi licensees, for instance. 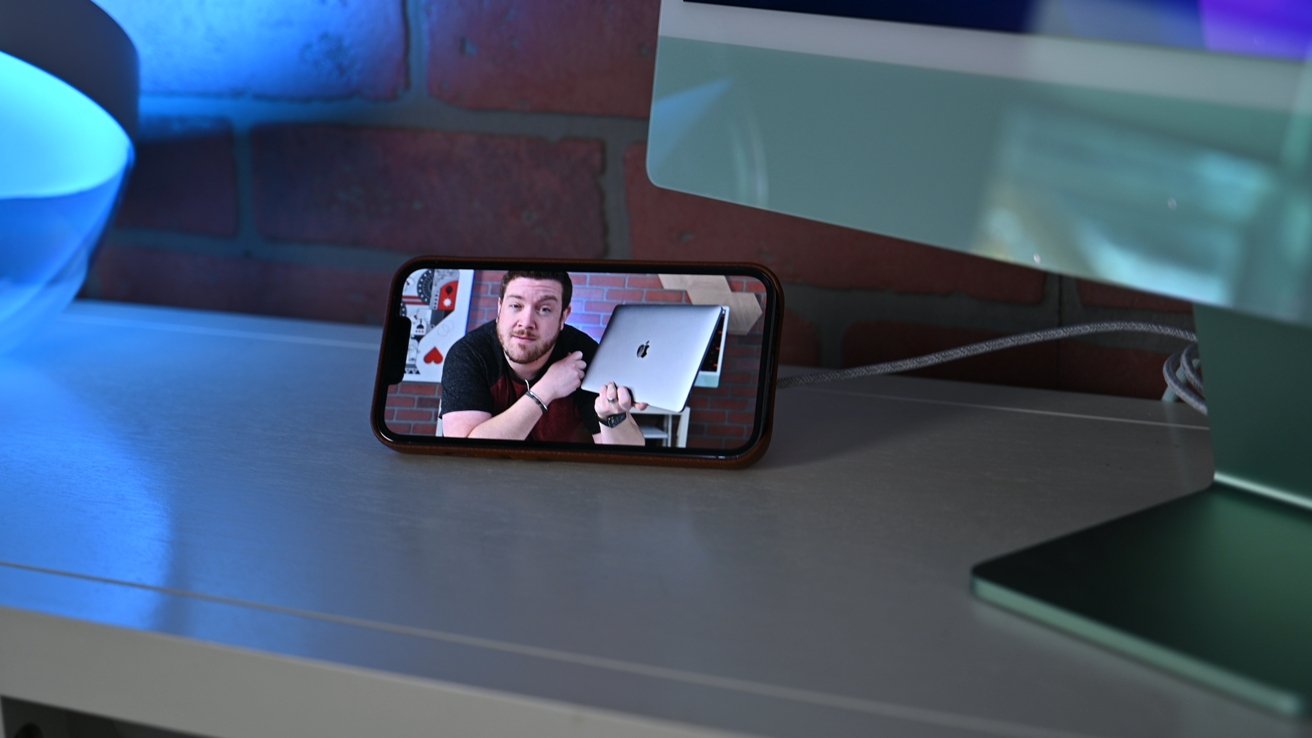 As much as we love the cable, we don't know if it's reasonable to justify dropping $59 for an iPhone MagSafe charging cable. There are plenty of other stands out there one could rely on as well as wired cables that can charge even faster. 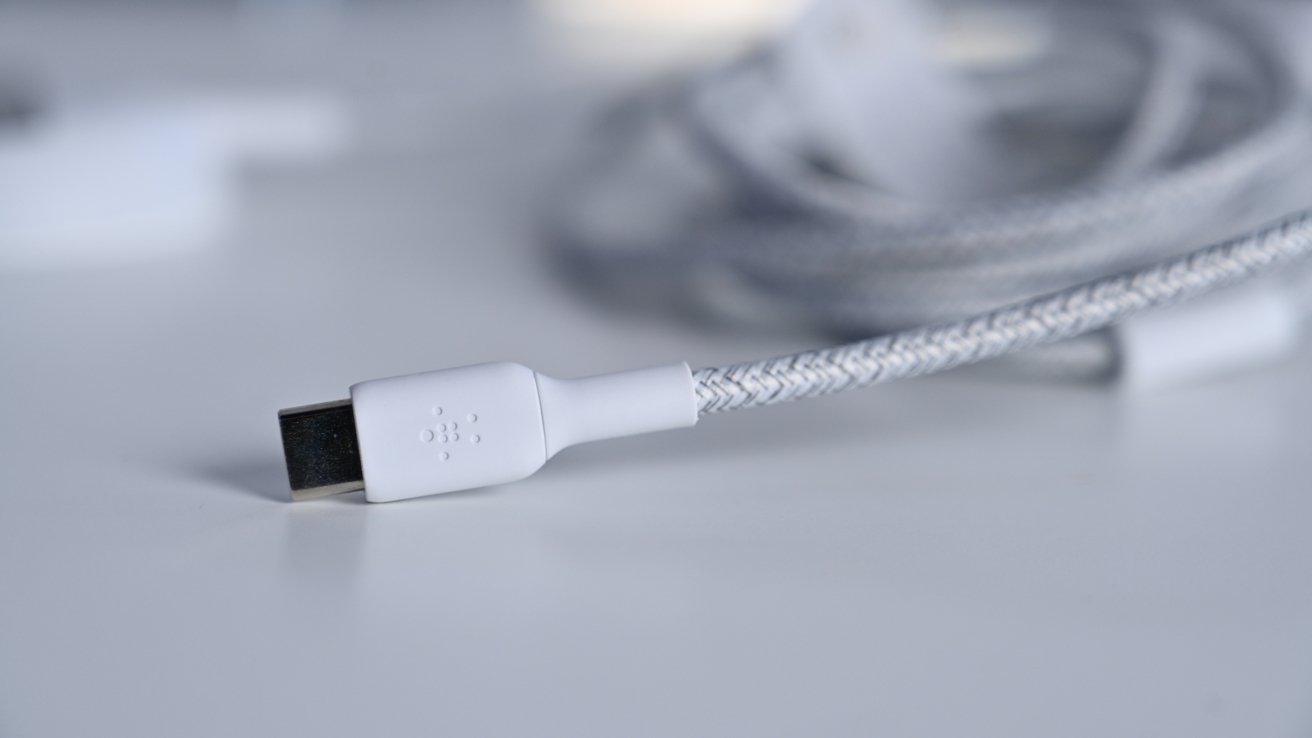 We're not going to loudly proclaim that you should run out and buy the latest BoostCharge offering, but we also have to recognize that Belkin has created a marginally better MagSafe cable than Apple has, depending on your evaluation criteria. Better or more full-featured products than Apple's own -- that still work well -- is the entire point of the MFi program, after all. 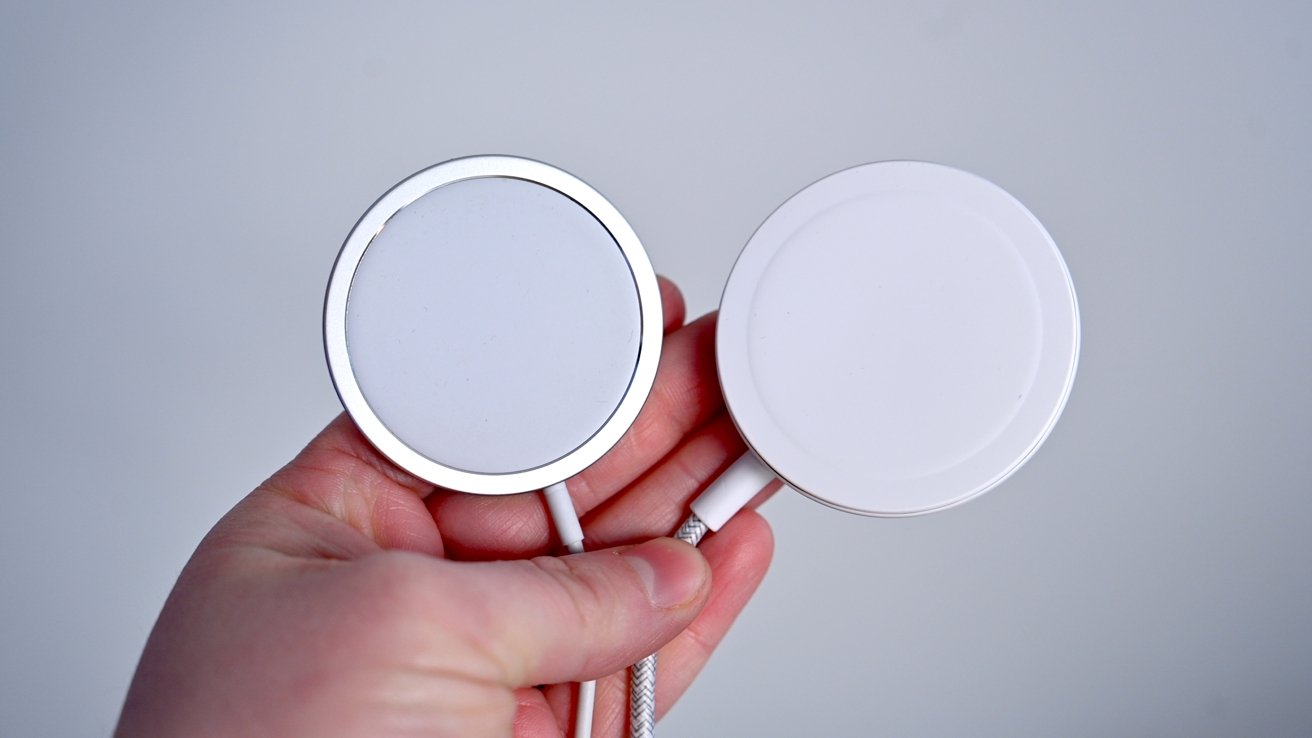 Belkin has taken Apple's MagSafe charger and made it better. You'll just have to pay a premium for it.

If you'd like to take the plunge and pick one up for yourself, you can buy them directly from Belkin for $59.99 in black or white.