AppleInsider
Posted: April 12, 2022 7:18PM
in General Discussion
Meta's charges to content producers for Horizon Worlds' may be seen as hypocritical, with the social company potentially clawing in almost half the value of virtual item purchases, despite previous complaints about Apple's 30% App Store fee. 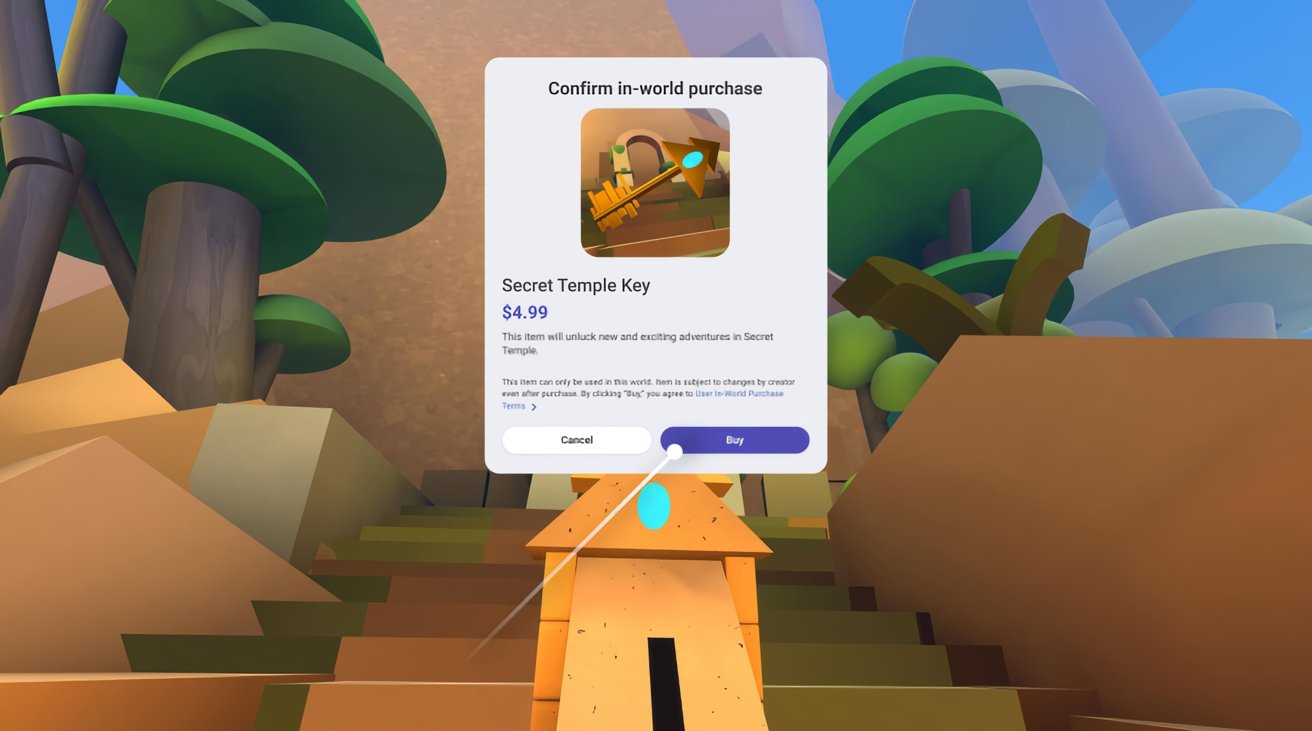 An example of a content payment interface in Horizon Worlds

Meta's "Horizon Worlds" is the company's first major foray into creating a metaverse platform for its Quest VR headset owners. However, experiments to enable content creators to earn from the sale of in-world content may find Meta the subject of criticism, due to its previous anti-Apple comments.

It was revealed on Monday by The Verge that Meta would charge creators a 25% cut of digital content intended for Horizon Worlds. However, this is actually a cut from funds that will have already been charged a 30% platform fee via the Quest Store, which again is owned by Meta.

According to Meta's VP of Horizon, Vivek Sharma, this is a "pretty competitive rate in the market," adding "We believe in the other platforms being able to have their share."

With the app expected to expand from VR headsets to mobile devices and other platforms, Sharma's comments seem to indicate that the 25% will be independent of whatever charges the platform takes. In effect, if launched on iOS, Apple would receive its standard 30% fee for App Store in-app purchases.

The problem comes in when you consider how much Meta stands to benefit from content sold via its own Quest Store. After its own 30% platform fee, the 25% cut is taken from the remaining 70%, so Meta will receive 47.5% of the value of sold content while content creators receive 52.5%.

The fees and comments could be considered hypocritical by industry observers who saw how pre-Meta-rebrand Facebook fought Apple's 30% fee.

In August 2020, shortly after Epic Games filed its lawsuit against Apple, Facebook app executive Fidji Simo openly complained about the App Store fee, declaring that it hurt small business owners attempting to recover from the effects of the COVID-19pandemic.

Later the same month, Facebook said Apple rejected a transparency notice the social network attempted to provide to users, alerting them to the 30% App Store fee. Facebook again framed it as attempting to "help people understand where money they intend for small businesses actually goes."

Facebook raised the issue again in June 2021, insisting it wanted to promote "offline transactions" between creators and companies, again to avoid having to pay Apple's 30% fee.

While Meta's maximum 47.5% cut is high, it's not as bad as the situation with Roblox. In August, a report into developers for the platform revealed content creators had a hard time earning revenue.

Part of it is due to content creators receiving around 35% of the purchase price, with the remainder going to various fees incurred via Roblox's platform, as well as the App Store fee.

For creators working on Horizon Worlds, it won't be the only way to earn money from the project. US-based creators will be able to earn from a $10 million creator fund, which will reward those who produce the most-engaging experiences.