The cheesegrater Mac Pro is 16 year old, and still the best Mac ever made -- for now

AppleInsider
Posted: August 7, 2022 1:33PM
in General Discussion edited August 7
The original Mac Pro is 16 years old today, and it's still remembered as a high point in Apple history. As we wait to see what an Apple Silicon version will be like, AppleInsider celebrates the old favorite workhorse -- and its less-successful sequels. 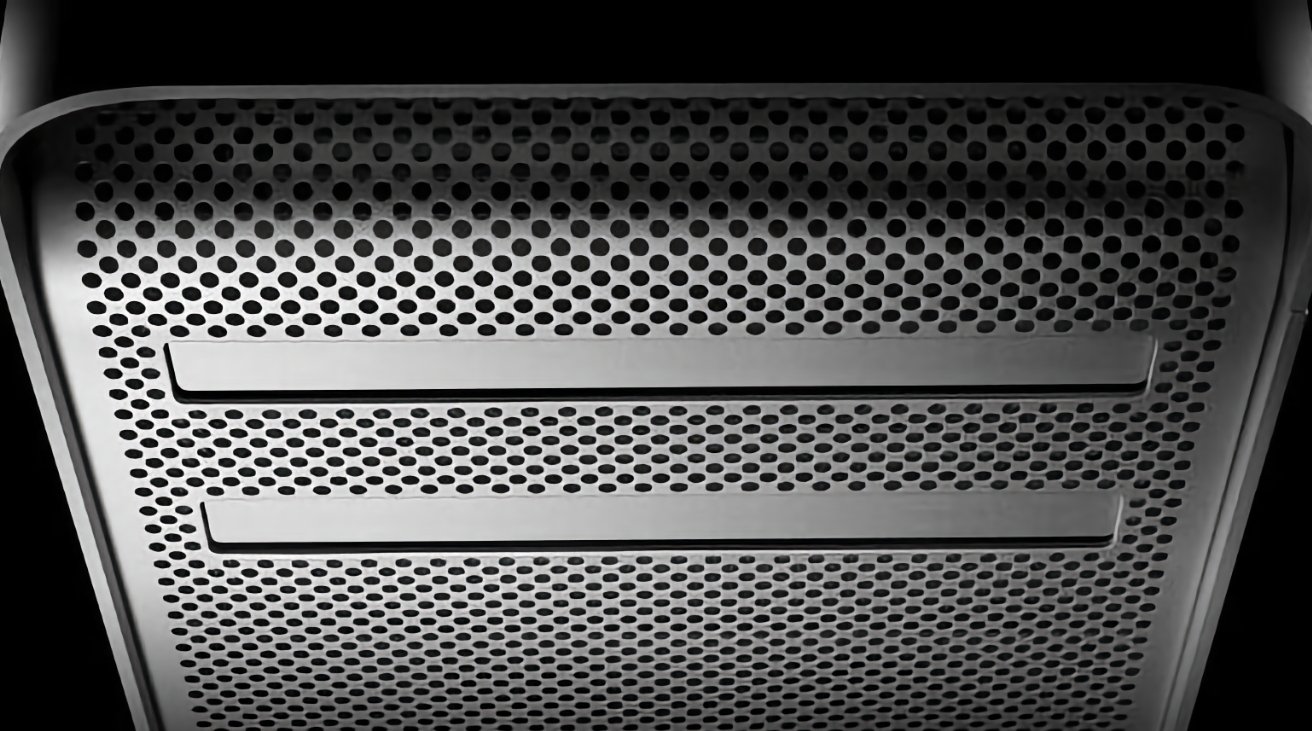 It was when Apple made its previous huge transition, the move from PowerPC to Intel processors, when the original Mac Pro came out.

On June 6, 2005, Steve Jobs had formally revealed that the long-standing rumor was true, Apple was switching to Intel processors for the Mac. That year he detailed the company's roadmap.

"And when we meet here again two years from now, our plan is that the transition will be mostly complete," he continued. "And we think it will be complete by the end of 2007. So this is a two-year transition."

That's as clear as Apple ever gets, and if Jobs's explanation of the transition sounds familiar, it should. Tim Cook followed exactly the same playbook when announcing the move to Apple Silicon.

The big news was that Every Mac in the range was to have an Intel processor, and that was good, but Jobs was specifically promising faster and more powerful machines. And the place where power was wanted most was what would become the Mac Pro.

We didn't know that name at the start of the Intel transition, but we did already have a top-of-the-line PowerPC model called the Power Mac G5. And one of the reasons Jobs gave for moving from PowerPC to Intel was explicitly to do with that machine and its development.

Standing in front of a slide showing a PowerMac G5 with the words "3.0GHz?" Jobs had a lot to say.

"I stood up here two years ago and I promised you this," said Jobs, pointing at the screen. "And we haven't been able to deliver that to you yet."

"As we look ahead, we can envision some amazing products we want to build for you," he continued, "and we don't know how to build them with the future PowerPC roadmap."

The Power Mac G5 was popular because it was the most powerful Mac of its time, but it never had the sheer love that the Mac Pro would get. So although there were hopes and expectations, it wasn't until 1:08 PM eastern time on Monday, August 7, 2006, that the Mac Pro began to be a hit.

"In the first two quarters, we transitioned almost all of our product over to Intel. Except for one, and that is the Power Mac," Jobs declared then. "Well, today the Power Mac is going to fade into history." 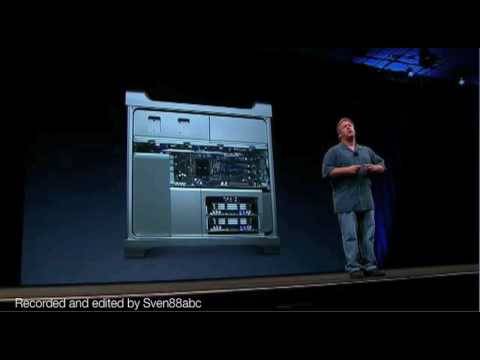 Phil Schiller then came on stage to reveal what looked like exactly the same machine as before. Surprisingly, it had the same large aluminum casing, the same handles for carrying it, and the same ease of access to the insides, and Schiller was quick to defend it.

"We have the best enclosure in the business, this is a beautiful enclosure design," Schiller said. "On the outside, it has all the benefits as before. Inside, it's entirely new."

This Mac Pro did reach Jobs's promised 3.0GHz and did so with Intel's Xeon processor.

"So this new Intel Xeon chip is an amazing processor to put into our products, but in every Mac Pro we're going to put two of them," he continued. "All Mac Pros, quad Xeon performance. These are screaming-fast machines."

It seems as if every new Mac is the fastest Mac Apple has ever made, but this one gave a huge leap with a claimed doubling of performance over the Power Mac G5. It also boosted what that performance was per watt of power.

Typically that's a concern when you're building notebooks and you're balancing the needs of work and battery life, but Schiller pointed out that it also had great benefits with this desktop.

"Performance per watt means we need less cooling systems inside the box too. Which means we can do more with the space we have," he said. "So we've doubled the number of drives inside the Mac Pro to now four hard drives of up to 2TB of internal storage."

There was also now a second optical drive, plus space to connect more external devices both at the back of the machine -- and now the front.

The front added a second USB 2.0 port and Firewire 800, while the back's most significant change was a double-wide graphics slot allowing for the biggest and most powerful GPUs to be installed without sacrificing an adjacent slot.

So the new Mac Pro was "screaming fast," and it came with greater expansion but still the same enviably easy way of doing that expansion. The enclosure lets you open the whole side and then just snap in new hard drives without any cabling or fiddling.

This original Mac Pro -- version 1,1 -- stayed on sale until a speed bump in April 2007. Then version 2,1 lasted until the following January when the 3,1 upped the performance with a faster quad-core Intel Xeon 5400 processor. You could upgrade it to have two such processors plus up to 32GB RAM.

It would be another 15 months before 3,1 was released. The Mac Pro (Early 2009) was particularly suited for multi-threaded operations where software could split its load between several processors.

Strictly speaking, the Intel Xeon 5500 processors were slower than the previous 5400 ones, but with better caching and communications between components, the result was a faster machine.

Another significant update was in July 2010 when, as well as moving to Intel's Xeon 5600-series processors, you could now have up to 64GB RAM and 8TB storage.

It lasted as Apple's flagship model until arguably that flag was faltering. It was two years before the Mac Pro saw another update. The July 2012 release now came with two 6-core 2.4 GHz Intel Xeon Westmere-EP processors.

On the outside, it still looked exactly the same, which was fine, but the insides were now looking old, too. It was being updated, but the interior was no longer improving radically, and so Apple's professional users began clamoring.

It's hard to top a success, even in technology where devices are developing fast. With the cheesegrater Mac Pro then seven years old, Apple could -- and needed to -- revamp it totally to take benefit of newer technology.

That's exactly what Apple did, and initially, it seemed that this revamped new Mac Pro was remarkable. It didn't stay that way, but at WWDC 2013, when Apple gave a sneak peek, we all applauded Phil Schiller's line, "Can't innovate, my ass."

However, unlike with the cheesegrater Mac Pro, he couldn't add that it was available that day. Instead, Schiller revealed that it would be shipping later that year -- and it did, just barely, on December 19, 2013. 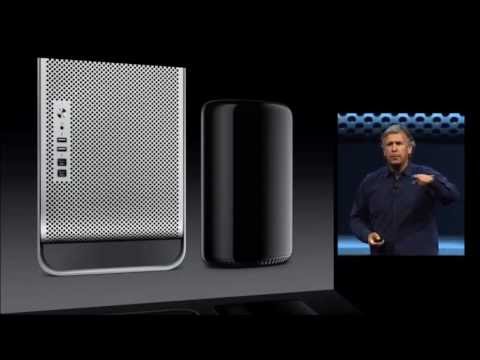 This 2013 Mac Pro was the first in almost a decade that didn't come in the same "beautiful enclosure." Ultimately it was also one that lasted only half as long: that very impressive new design broke down under load because of its "thermal corner."

First reviews were very positive but complained about the 2013 Mac Pro's lack of options for upgrades, and then it was hitting performance bottlenecks because of heat. As great as it looked, it was not the real successor to the 2006 Mac Pro that people had wanted.

Apple took its eye off the ball

We'll never really know how Apple saw the Mac Pro, but it was never going to become the insane best seller that, say, the iPhone is. And very soon after launch, there were signs that Apple had rather forgotten the 2013 Mac Pro.

It wasn't until 2017 that Apple did anything about that Mac Pro, and then it was to announce its death. Apple would continue to sell that Mac Pro up into 2019, but the only folks that bought it had rack hardware to fit it, or very specific vertical market applications that relied on the form factor.

After all, it was a tough sell when Apple promised a radically improved Mac Pro was coming, and not when Apple released an iMac Pro. For many users, the iMac Pro went successfully toe to toe with the 2013 Mac Pro, but also it's hard to justify the cost of a machine that you know will be replaced soon.

That's got to be a familiar concern to people who've been weighing up whether or not to wait for the Apple Silicon Mac Pro.

Apple didn't say it would be such a long wait from the 2017 news to the 2019 reveal, but it was evident that the new Mac Pro would not come out in 2017. Such was eagerness for the new machine that countless articles chose to interpret that as meaning it would be out in 2018.

The audience for the Mac Pro has always been smaller than any other Mac, but it's a passionate one. It's always been an audience where the cost is a factor, but not the only one.

Whether Apple really forgot this audience or not, it definitely learned from the 2013 Mac Pro that this audience is not cost-conscious but benefit-hungry.

The target audience wasn't that concerned about the price -- again, they weren't ecstatic about it, but in their use case it was a worthwhile investment. But just about everyone mocked how Apple would sell you a set of Mac Pro wheels for $699.

At the time, it seemed like this was the perfect Mac Pro. Perhaps it could even have taken over the mantle of the beloved favorite like the original Mac Pro from 2006, but it didn't.

For in June 2020, Apple announced the transition to Apple Silicon. Once again, the promise was of greatly improved performance, even if no details were revealed.

And then we started to get details. It wasn't quite the same as when the iMac Pro could often beat the Mac Pro, but the first Apple Silicon Mac mini was a startlingly leap forward.

Apple Silicon was clearly working and seemingly able to radically improve performance at a much lower cost than an Intel Mac Pro.

You suddenly had to have a very good use case, or someone else funding your budget, to make buying the 2019 Mac Pro the right choice. It still was for many people, as you can't postpone your work while waiting for Apple to release a new model, but sales surely must have dropped.

Completing the transition to Apple Silicon

It seems churlish to point this out when Apple has successfully pulled off an astounding complex transition from Intel to Apple Silicon, but it didn't make its own deadline. Tim Cook said it would take two years, and every Mac did make that transition -- except the Mac Pro.

So far, all we've had is a hint about an Apple Silicon Mac Pro coming, and Apple also said that it is done with the M1 processor.

There is a claim that Apple had an M1 version of the Mac Pro, but decided to wait until it had one with what may be called the M2 Extreme processor.

It certainly won't have an M1 processor now, but beyond that, it's simply unknown what the next Mac Pro will bring.

Back to the future

That original 2006 Mac Pro was the right combination of power, features, and upgradeability. The 2013 version ditched the upgradeable side, and then the 2019 version brought it back.

It's fair to guess that Apple Silicon Mac Pro will be upgradeable. Given the price/performance of Apple Silicon, it's not unreasonable to think that it may also come in at a much lower price than the last Mac Pro.

No doubt, it's going to be popular with its target audience. But that original cheesegrater Mac Pro may be an example of catching lightning in a bottle.