AppleInsider
Posted: November 26, 2022 1:29PM
in Apple Watch
There are some Apple Watch accessories on Amazon that are absolute garbage. Every once in a while, something pops out of the pile that's worth it.

We're not really big fans of brands on Amazon with too many adjacent consonants. Every once in a while, though, we see something from one of those brands, or an adjacent one, that gets our attention.

We know it's an adjacent brand because the full name of the product is "Mixfly Upgrade Ultra-Compact iWatch Charger Dock for Apple Watch." We're just going to call it the "Mixfly ultra-compact Apple Watch charger."

This little doo-dad got our attention, mainly because we needed something in about a day and didn't want to take the time to shlep to a big-box store and pay full price. It's perfect to toss in your travel bag's inside pocket, in the off-chance you forgot your Apple Watch charger or dock, or the one you have doesn't fully survive travel, like ours didn't.

Pull it out, plug it into a Lightning cable, and you're good to go.

There's no special sauce here, nor any particular Apple-authorized stamp on it. Apple Watches since the Series 3 have (theoretically) been able to use Qi, and that's what this appears to be, just in an Apple-friendly case.

If you hold it just right up against the back of a case-less iPhone with wireless charging capabilities, which is just about everything shipped in the last five years, it even works as a Qi -- not MagSafe -- wireless charger. Given that it requires a Lightning cable, we're not sure why you wouldn't just plug that into the iPhone instead of fumbling and being incredibly precise with it, though. 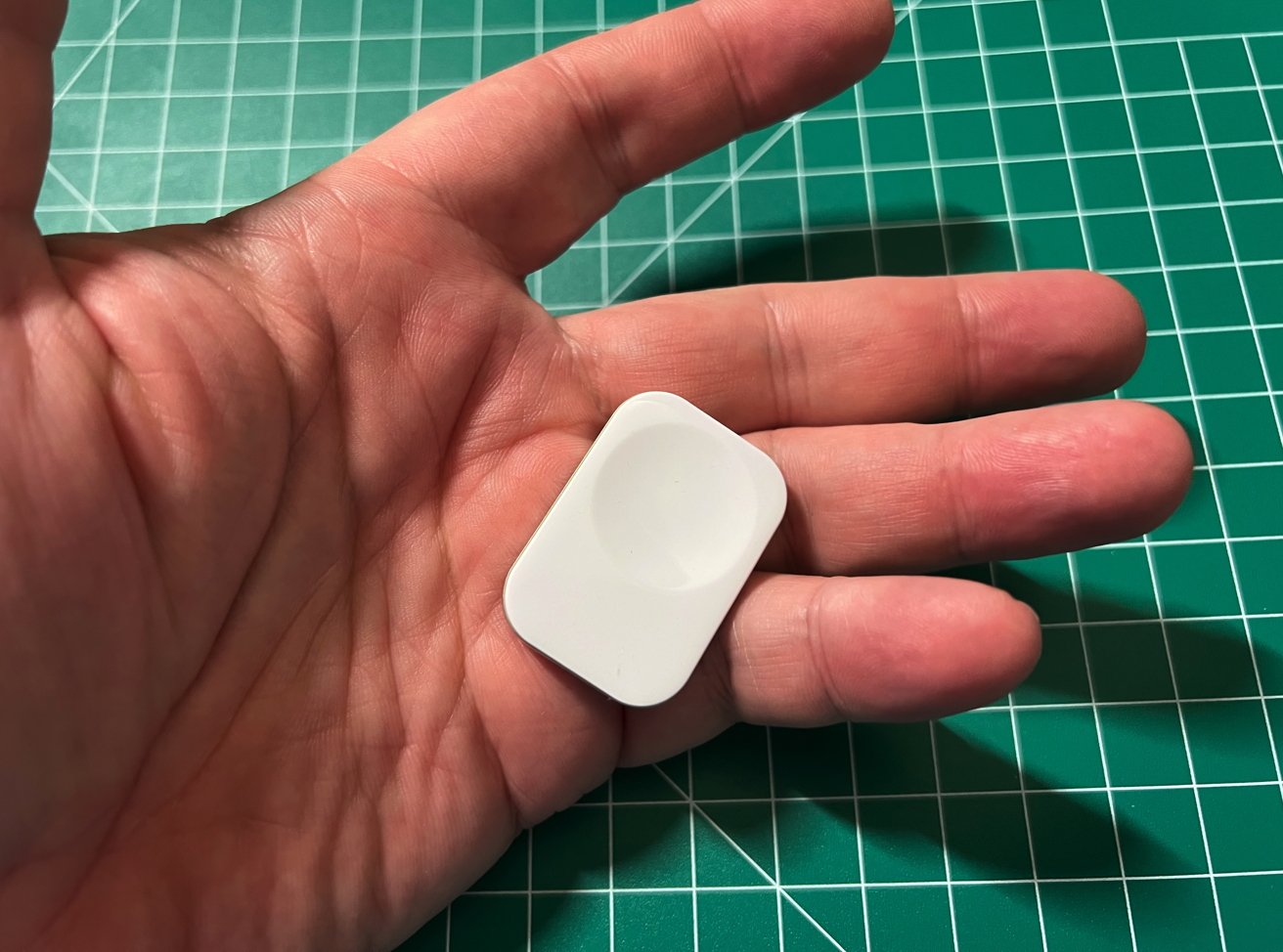 We didn't have any problem with random physical disconnects or inexplicable charging stops. Well, at least not any more problems than we normally have with the Apple Watch puck that is.

And, it works on AirPods charging cases that are compatible with the Apple Watch charging puck too.

So far, in the eight weeks since we took a (low-risk) chance and bought one, it has survived a 1700-mile round-trip journey in a car, hotel life for 11 days, a few train trips, and most perhaps the biggest testament to it, rough handling by children. As far as durability goes, that's about as much as you can ask from something like this.

Sometimes, reviews are short and sweet. This is one of them. Despite weirdly having "iWatch" in the name, this one-inch metal and plastic Apple Watch charger does what it says it will do, does it pretty well, and does it on the cheap.

We are in no way certain that it's going to last forever, but for now, it's a decent solution to not having one more cable in the travel bag. And, if you lose it, based on its pricing history and attachable coupons that we've seen for the last month, you're out about $9 most of the time, and perhaps only $6.

That score is assuming you can get it for less than $10. Take a half-point off that score if it's at the full retail price of $15.

With much more travel coming in its future in the next few months, we'll see how long it lasts, and come back in a few months.

The Mixfly Upgrade Ultra-Compact iWatch Charger Dock for Apple Watch retails for $14.99. As this is published, there's a click-box to apply a 35% off coupon -- which is almost always the case.