AppleInsider
Posted: October 25, 2022 7:53PM
in iPad
Microsoft's Surface Pro 9 updates the Windows tablet with both Intel and ARM options, in a form that competes directly with Apple's iPad Pro lineup. Here's how the rival tablets square up. 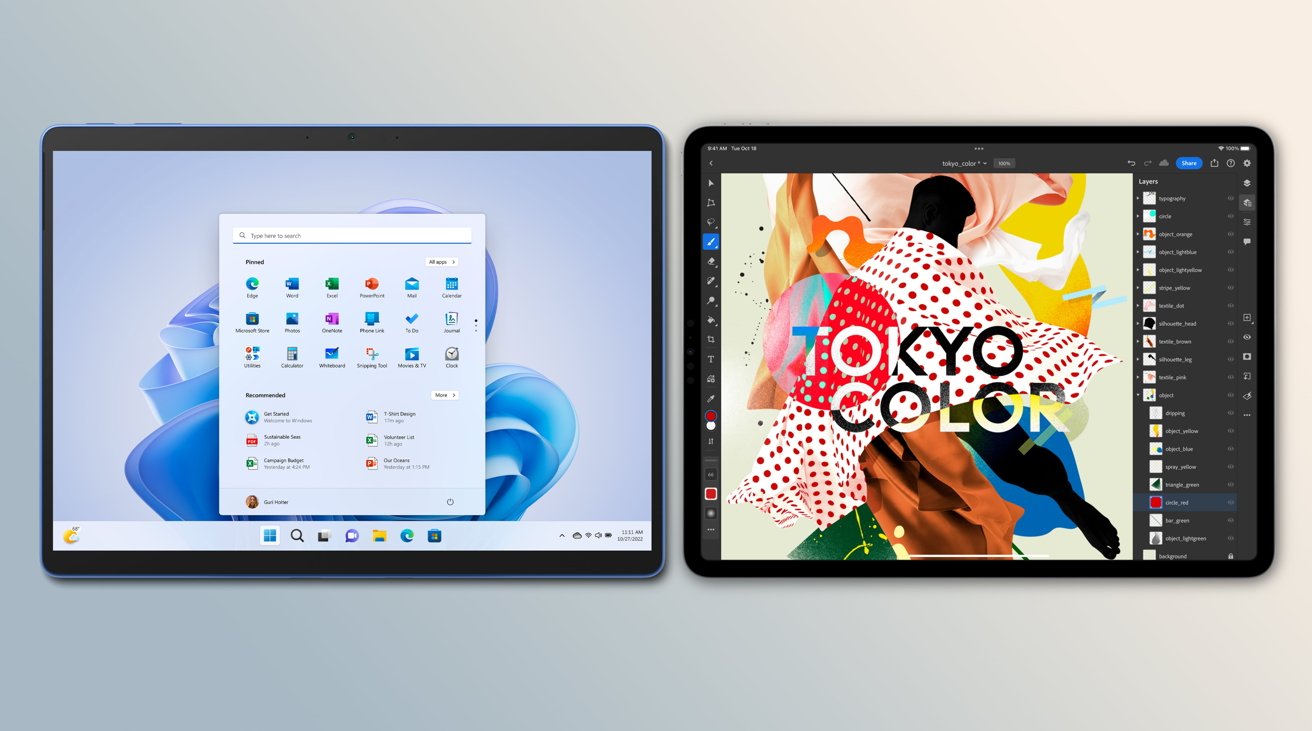 Microsoft updated its Surface product range in October, with the Surface Pro 9 combining the usual Surface Pro and Pro X into a single form factor. With the choice of an Intel chip or an ARM processor with added 5G connectivity, Microsoft effectively shrunk down the model range by turning them into separate processor options while keeping almost everything else identical.

As a 13-inch tablet with "Pro" in the name, it naturally competes against Apple's iPad Pro range, which itself has undergone a fall refresh. While not as major as other Apple products, it does sport a chip upgrade to the M2.

With the holiday sales period bearing down on the two companies, this is how the two lineups fare when their specifications are compared.

Apple's 2022 iPad Pro lineup could be considered an internal spec-bump edition, and for good reason. Instead of making major changes to the outside, Apple instead kept the design as identical as possible to the previous year's effort. 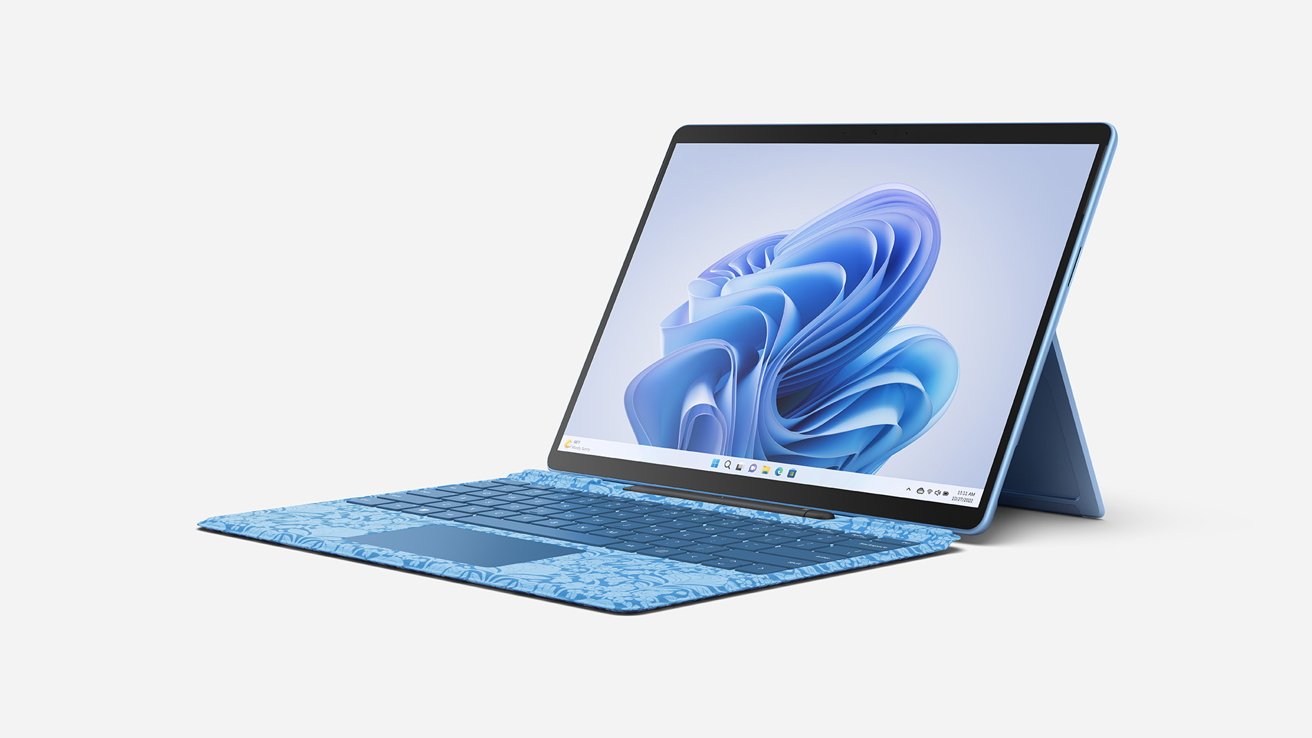 The Studio Pro 9 continues to have a kickstand in the rear.

Made from aluminum, the Surface Pro 9 is roughly comparable to the 12.9-inch iPad Pro in terms of size. At 11.3 inches by 8.2 inches, it's longer but narrower than Apple's large tablet, though it isn't quite as thin at 0.37 inches.

That being said, Microsoft does include the kickstand, a key feature of the Surface lineup. While adding extra thickness to the design, it also means it could be stood up on a table, something the iPad Pro cannot do without some form of cover or accessory.

The 11-inch iPad Pro has a Liquid Retina display, which is a TFT screen with LCD backlighting. The 12.9-inch's Liquid Retina XDR screen offers TFT but with mini LED backlighting, which provides a brighter display as well as better handling of HDR content.

Both models also include support for Wide Color (P3), True Tone, and ProMotion, Apple's variable refresh rate feature that can go up to 120Hz.

Microsoft's 13-inch PixelSense Flow display is marginally larger than the 12.9-inch iPad Pro, though it doesn't have the mini LED backlighting. Instead it uses the same conventional TFT/LED pairing as the 11-inch iPad Pro. 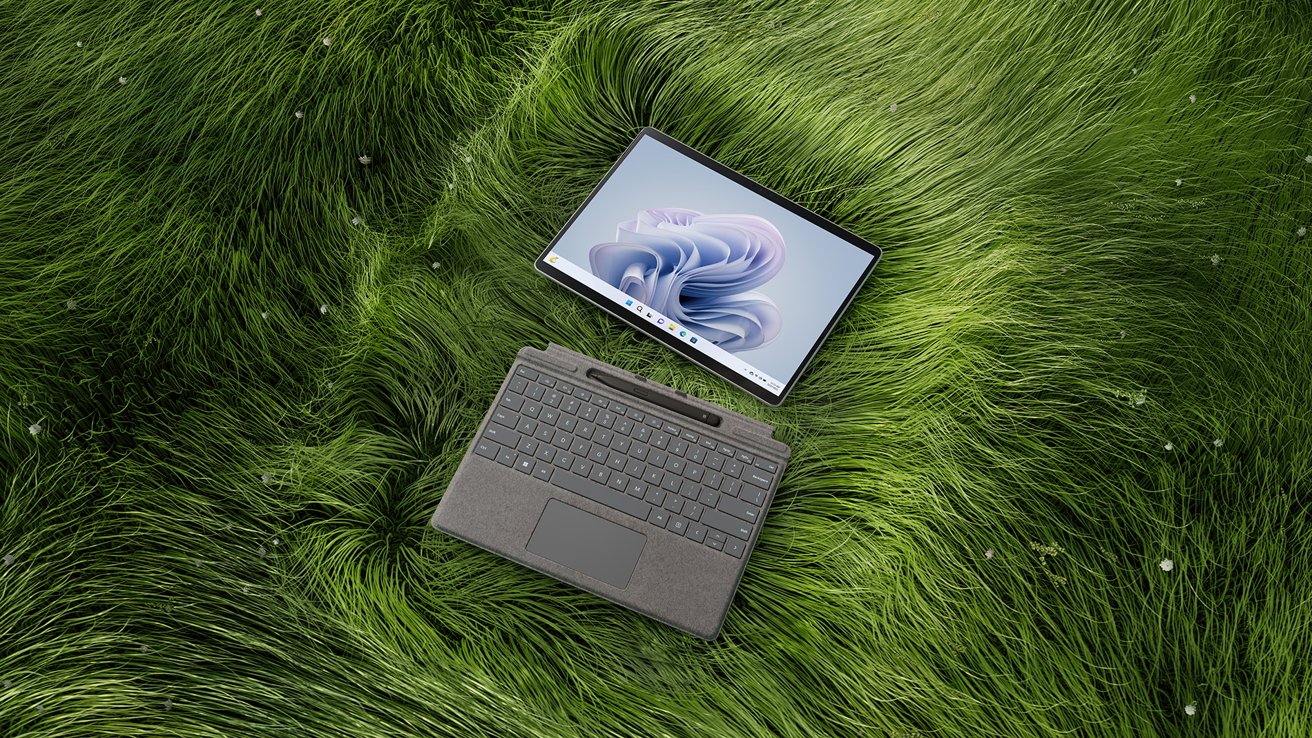 The Surface Pro 9's screen may be bigger than the 12.9-inch iPad Pro, but it doesn't have mini-LED backlighting.

While Microsoft doesn't state a brightness figure for its tablets, it does identify the contrast ratio to be 1,200:1, far below the similarly-sized iPad Pro model.

That said, it does still offer a dynamic refresh rate of up to 120Hz, adaptive color, and support for sRGB and Vivid color profiles.

Both product families support stylus input and multitouch, with the iPad Pro using the second-generation Apple Pencil while the Surface supports the Surface Slim Pen 2.

Apple's main update to the iPad Pro lineup is the M2 chip, which includes an 8-core CPU with four performance cores and four efficiency cores. That's accompanied by a 16-core Neural Engine, a 10-core GPU, and a Media Engine to handle encoding and decoding of H.264, HEVC, ProRes, and ProRes RAW video.

Microsoft uses three chips in its Surface Pro 9 lineup: two from Intel and one ARM-based version.

The Core i5 is the same, except it manages a max turbo of 4.4GHz and 3,3GHz for the efficient cores.

The third chip, the ARM-based SQ 3, is a bit of a mystery. Microsoft hasn't provided any hard details about the chip, except it's "powered by Qualcomm Snapdragon." It also has a "Neural Processing Unit," which is Microsoft's equivalent of Apple's Neural Engine, which can help with tasks that could benefit from that sort of processing.

For graphics, Apple is using the 10-core GPU version of the M2. Microsoft's Intel models use Intel Iris XE Graphics, namely integrated graphics, and an Adreno 8CX Gen 3 on the SQ 3 chip.

Early benchmarks for the Surface Pro's SQ3 score it at about 1,125 for Geekbench's single-core test, and around 5,800 for the multi-core. Meanwhile, the Core i7 variant manages around 1,175 and 6,500, respectively.

Evidently, the Apple Silicon strategy is doing well for Apple, and despite having time to catch up and even leveraging the pretty decent Snapdragon platform for its own ARM chip, it seems Microsoft still has more to learn about performance from its long-time rival.

The iPad Pro models have two cameras on the back, with a Wide 12-megapixel shooter joined by a 10MP Ultra Wide version. There's a 2x optical zoom out, a 5x digital zoom in, a TrueTone Flash, auto image stabilization, and autofocus with Focus Pixels on the Wide lens.

They also benefit from a LiDAR sensor on the rear, enabling some depth mapping of the environment, which can also help with things like focusing at night. Video extends to 4K at 60fps, including ProRes at up to 4k 30fps, and a 240fps 1080p slo-mo, among other features. 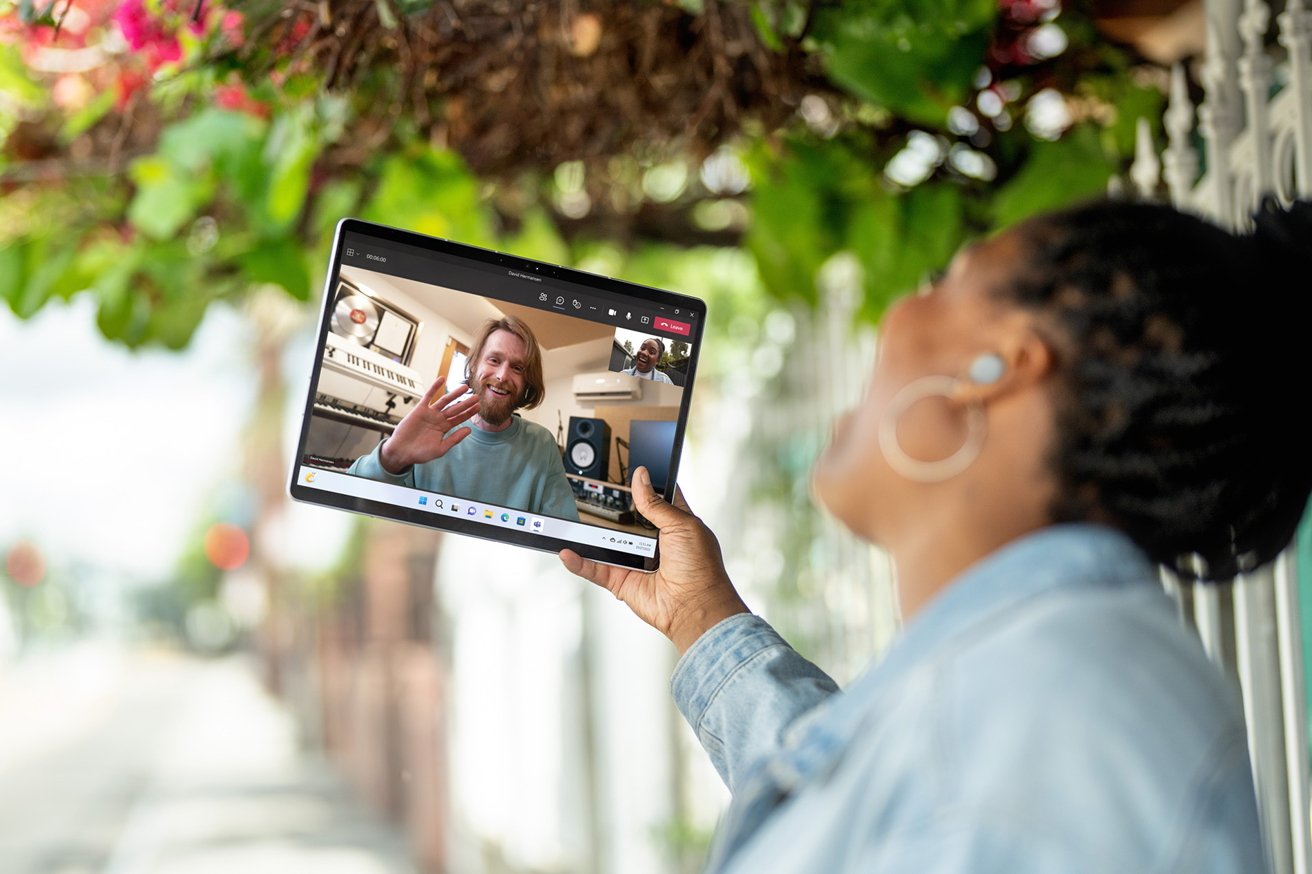 The Surface Pro 9 has just one camera on the back, with a 10-megapixel sensor featuring autofocus and 4K recording capabilities.

At the front, Apple uses a TrueDepth camera array, with a 12MP Ultra Wide camera capable of 1080p 60fps video, cinematic video stabilization, and depth mapping. This last point is used for Face ID identification of the user, as well as Animoji and Memoji support.

Microsoft's front camera is capable of 1080p video recording, but it's also functional with Windows Hello for authentication.

Microsoft adds that its front camera uses the Neural Processing Unit for its Automatic Framing feature, reframing the video feed to fit the subject or subjects in the middle of the screen. Apple already offers Center Stage in its iPad Pro, a practically identical feature.

For local wireless networking, both Apple and Microsoft include support for Wi-Fi 6E, which will be handy when on appropriate networking infrastructure. Apple does use Bluetooth 5.3 in the iPad Pro, while Microsoft errs to Bluetooth 5.1 in the Surface Pro 9.

Apple includes 5G cellular support in its iPad Pro as a paid extra, which supports both sub-6GHz and mmWave connections.

Microsoft limits its 5G connectivity to models sporting the SQ3 chip, complete with sub-6GHz and mmWave support. You cannot get cellular on the Intel models. 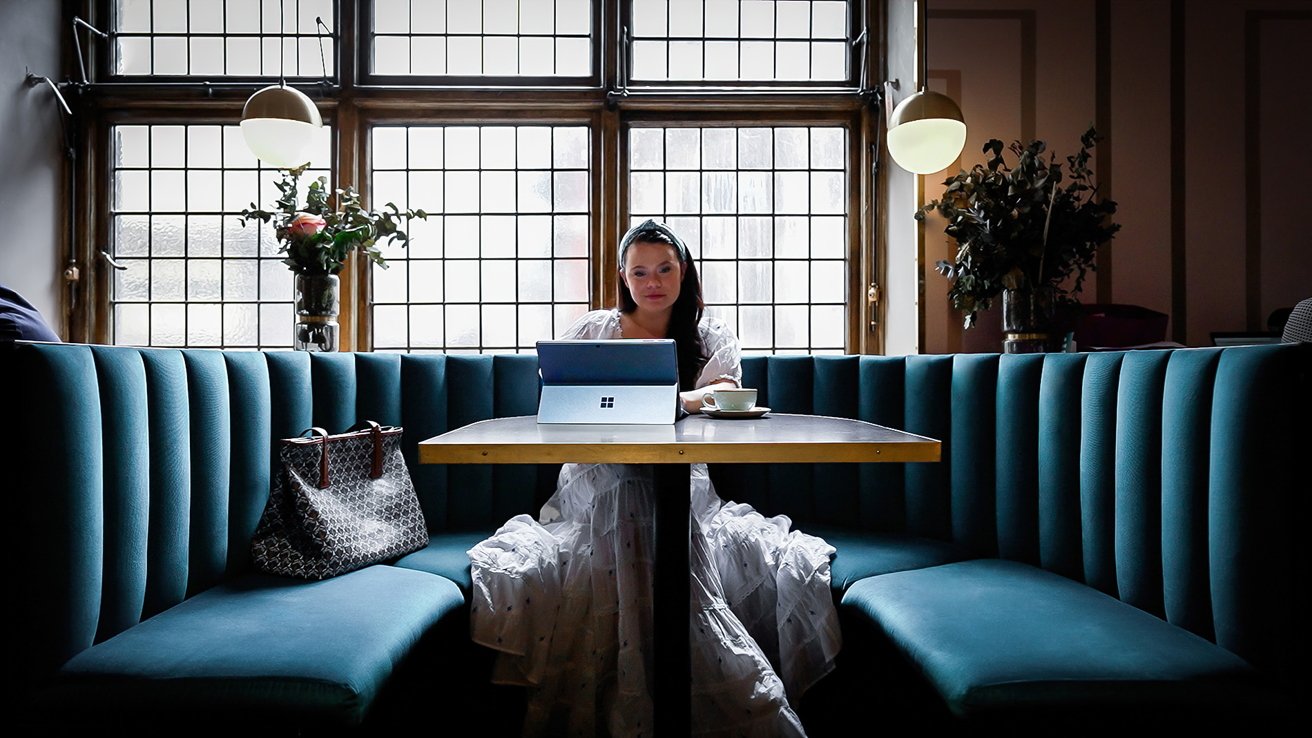 You can use 5G on the ARM-equipped Surface Pro 9, but not ones with Intel chips.

On to physical connectivity, and this is where Microsoft pulls ahead.

Apple includes a single Thunderbolt/USB 4 port, though it also has a Smart Connector for connecting with accessories.

Apple's iPad Pro line has included a quad-speaker system for quite some time, enabling stereo playback of media regardless of how the tablet is oriented.

Apple has long tried to keep its iPad Pro line at 10 hours of battery life for typical web usage, and it does so again for the 2022 models. For cellular variants, that figure dips to 9 hours when surfing online using the connection.

Microsoft claims the Surface Pro 9's Intel models can manage up to 15.5 hours of battery life based on typical Surface device usage, while the SQ 3 can get up to 19 hours. 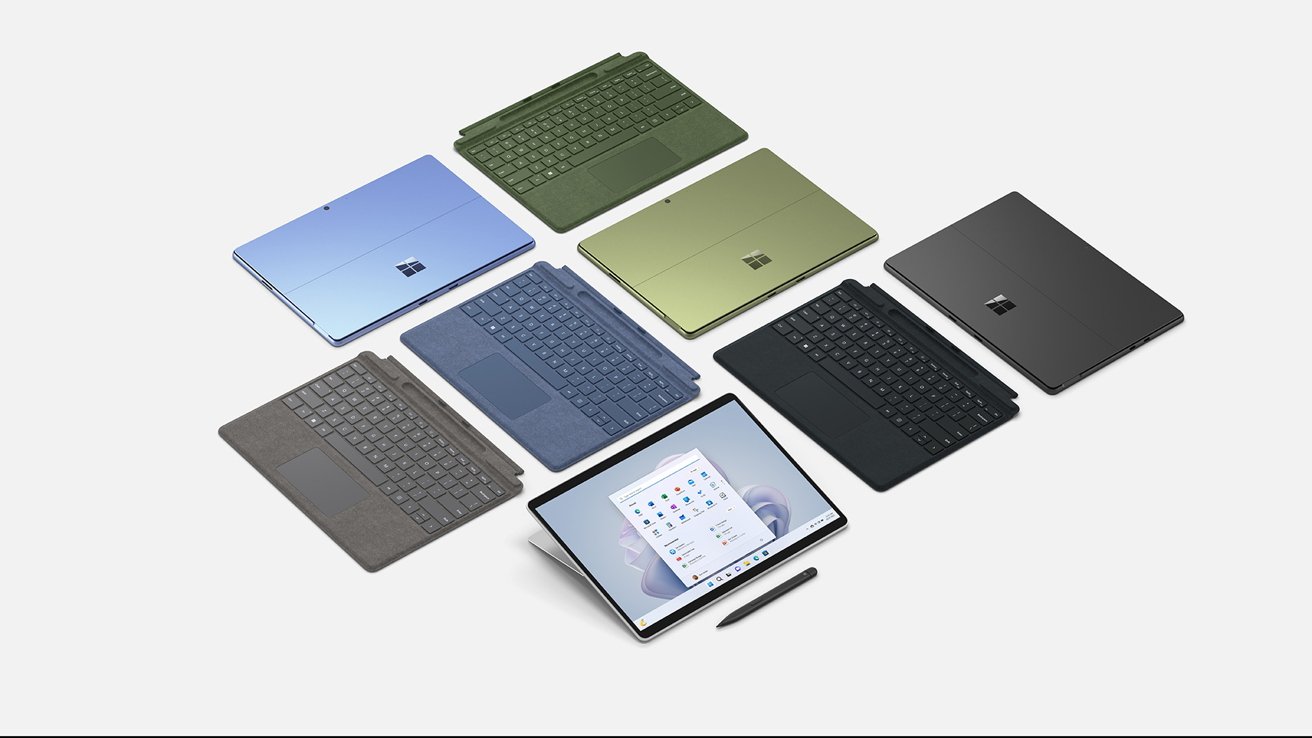 As usual, Microsoft offers the Surface in a variety of colors and with a multitude of accessories.

This "typical Surface device usage" is defined as a combination of "active use and modern standby," including web browsing with multiple tabs, productivity tool usage, and applications left idle.

While there can be a bit of disagreement in terms of how to measure battery life, it's safe to say that both Surface and iPad Pro can handle a day's work.

The iPad Pro start with 128GB of storage, with options for 256GB, 512GB, 1TB, and 2TB. Apple also advises that the non-terabyte capacity models have 8GB of memory, while the terabyte ones have 16GB.

Microsoft's Intel models are available in configurations with 8GB, 16GB, and 32GB of LPDDR5 RAM, while the SQ 3 version has 8GB and 16GB LPDDR4x variants.

Microsoft also includes 128GB, 256GB, and 512GB options across all models, though the Intel models also have a 1TB option. These are also labeled as being "Removable," but Microsoft also says it can only be done by an authorized technician.

Curiously, the 256GB and higher capacities of the Intel models are labeled as being built on Intel's Evo Platform. All this really means is that the device is certified by Intel to meet specific goals when it comes to performance and other factors.

These prices are also for the Wi-Fi models. Adding cellular access to any configuration costs an extra $200, regardless of capacity. 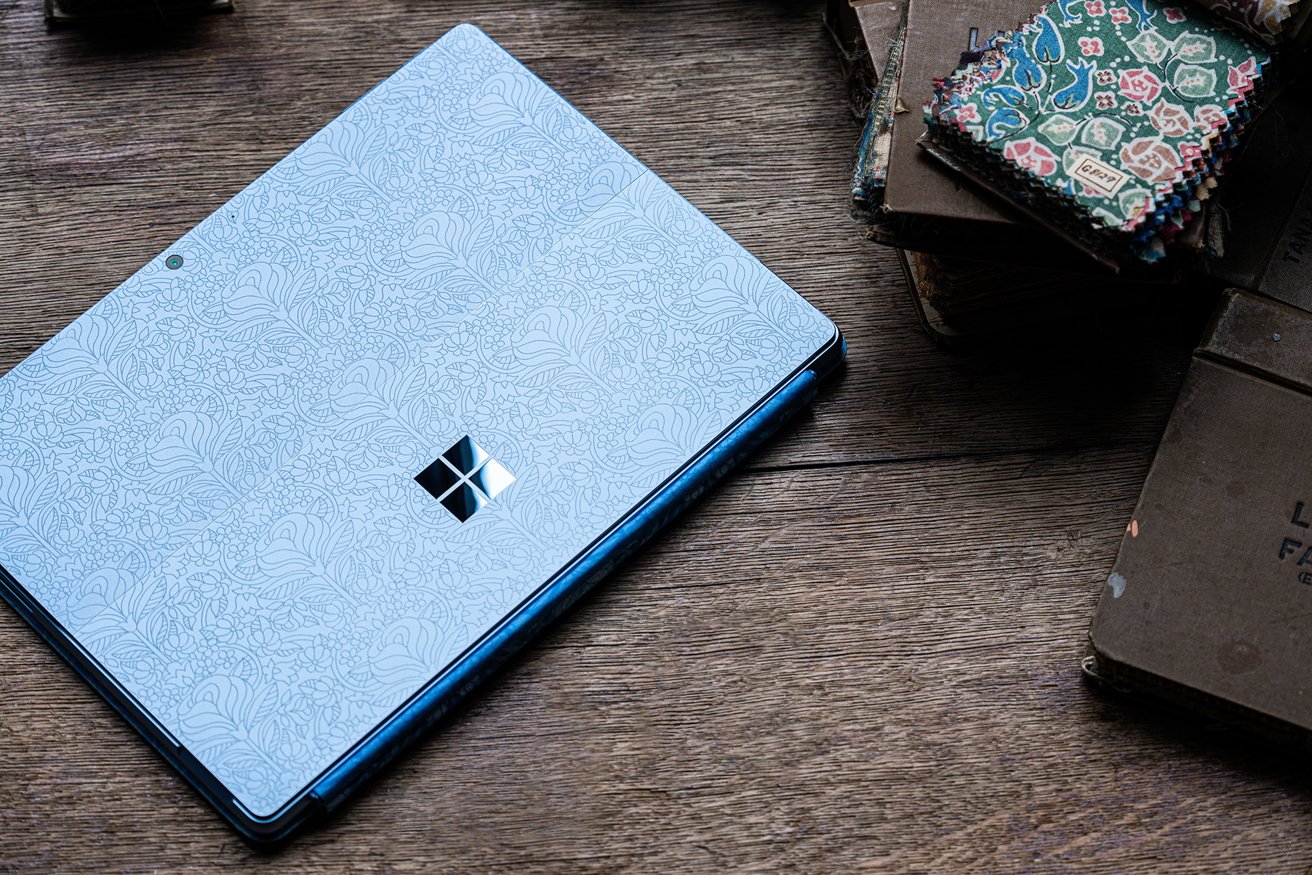 A special edition print version of the Surface Pro 9 is available.

Apple sells its iPad Pro models in a choice of Silver and Space Gray. Microsoft offers its tablets in Platinum, Sapphire, Forest, and Graphite, though not all colors are available for all combinations.

Decent for a Windows Tablet

On its own, the new Surface Pro 9 lineup is pretty good. That's with promises of high battery life and good performance in a tablet that happens to have a good resolution.

The selection of Intel chips is also great, and if Microsoft's Snapdragon-based SQ 3 is in the same ballpark, it should offer a lot to consumers in the market for a Windows desktop.

However, things start to fall apart when you slide it against Apple's iPad Pro range, especially when you look at the 12.9-inch model.

We know that, at least for the Intel models, the M2 will offer tons more performance overall. Sure, you can get a few more hours of battery life out of the Surface, but 10 hours is still damned good for a productive workday.

We also know that Apple has a handle on cameras, with its rear options providing a lot more to users than Microsoft's version.

Even when we look at the cost of the hardware itself, the Surface Pro 7 starts off cheaper than the 12.9-inch iPad Pro, but it overtakes to cost a few hundred dollars more for the highest-spec models.

The SQ 3 models start off relatively more expensive and stays that way for comparable storage capacities of the 12.9-inch iPad Pro. And that's giving Microsoft the benefit of the doubt on performance.

If you want the smaller screen, the 11-inch iPad Pro is always an option, and given the further cost savings, a pretty good one at that.

For anyone in the market for a Windows tablet, the Surface line has continually proven itself to be a great example of the form. For a productive tablet, the iPad Pro continues to be the far better option.

You can find the best iPad deals across popular Apple Resellers in our iPad Price Guide, which is updated multiple times a day. Or quickly jump to M2 iPad Pro listings at B&H, Adorama and Amazon.

The Surface Pro 9, meanwhile, can be purchased from Microsoft directly, as well as at B&H Photo and Amazon. Prices start at $999.