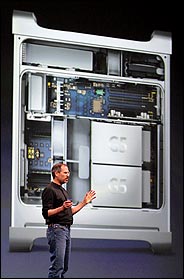 Pretty good article but it smothers the news that the G5 beats a dual Xeon Dell to the bottom of the page.