AppleInsider
Posted: June 17, 2016 5:24AM
in iPad edited June 2016
Dubbed a "reactive" plush toy, Octobo is a soft, fuzzy octopus that turns into an interactive storybook controller with a little help from Apple's iPad. 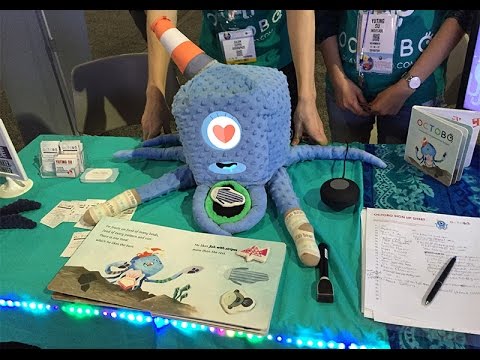 Octobo, seen above, began life as creator Yuting Su's master's thesis for the University of Southern California's Interactive Media and Games program. After a garnering acclaim at the 2016 Game Developers Conference, Octobo made a splash at the IndieCade Showcase @ E3 event this week.

While it may not look like it, Octobo is literally stuffed with technology. Soft sensors in the plush's tentacles and body detect shakes, squeezes and hugs, while a separate RFID sensor interacts with trigger modules included in the accompanying book. Everything is controlled by a tablet like an iPad that, when inserted into Octobo's head, transforms into a face.

A corresponding app powers interactions and serves up visual and audio reaction to tactile sensor input. For example, waving Octobo's tentacles in the air or hugging the toy's body elicits a facial animation and voice response, the latter played through an attached speaker.

Included within the storybook's pages are velcro pieces containing RFID chips that invoke different reactions when placed on Octobo's reader (camouflaged to look like a dish being grasped by two tentacles). Depending on cues from the book, readers offer these pieces to Octobo, who generates an appropriate onscreen reaction.

The Octobo team has not announced plans for production, but the group's webpage mentions Kickstarter as a potential route to market.