GoPro Fusion with OverCapture could mark new age for videography

AppleInsider
Posted: June 13, 2017 2:49AM
in General Discussion edited July 2017
At the GoPro Mountain Games in Vail, Colo., last week, GoPro took the wraps off its Fusion spherical camera, a hardware and software technology package that, if executed effectively, could herald the beginning of a new age of videography.

The dream of every videographer is to be in all places at all times, capturing footage from every angle. It's an elusive goal for professionals and amateurs alike, but technology introduced with GoPro's Fusion could make it a reality, upending decades of traditional filmmaking technique.

AppleInsider sat down with Fusion product manager Jess Foley for an inside look at the project and what it means not only for GoPro, but the wider world of videography. (Full disclosure, Foley and I were stuck on the same shuttle to Denver International Airport).

Describing herself a purist when it comes to cinematography, Foley thinks features like "tiny world" -- and perhaps even VR, thanks to a clunky headset-based consumption model -- will be short-lived in the grand scheme of filmmaking. The viewpoint is not one you would expect from a team lead working on a 360-degree camera. Spherical capture often goes hand-in-hand with VR headset viewing, and indeed GoPro presented much of its Fusion content on Samsung Gear VR headsets during last week's event.

However, the VR slant disregards Fusion's real trick: OverCapture. The software-driven function lets filmmakers pull slices from anywhere in the 5.2K spherical stream. An integral part of the Fusion experience, OverCapture can reproduce traditional camera framing, including pan, tilt and tracking shots, from a single static unit without the usual fisheye look that is typically part and parcel of 360-degree capture.

OverCapture opens a world of possibility for videographers. Set up a Fusion in the middle of a crowded scene and capture footage on all sides -- including above and below -- simultaneously, then pick and choose what angles make it to the final cut.

In many ways, Fusion replaces multi-cam setups like those seen in popular automotive videos. Instead of attaching five or six GoPro Hero cameras to your hood, fenders and bumpers, just mount one Fusion to achieve similar results. As an added bonus, OverCapture lets users perform pan and tilt without bulky rigs.

It is this level of flexibility that makes Fusion such a powerful platform, and one that has taken GoPro well over a year to realize.

Spherical camera hardware has been around for years, Foley notes, but no single product has been backed by an effective software solution. This, along with a lack of imaginative marketing on the part of camera makers, has hindered wide consumer adoption. GoPro is looking to create a compelling use case when it launches Fusion later this year, Foley says.

As part of that effort, the company is opening Fusion access to established production houses and experienced filmmakers in a pilot program this summer. The program is less about setting a benchmark than showing off what the device is capable of achieving, and hopefully serving as a starting point for future Fusion owners.

GoPro brought about ten working Fusion units to the Mountain Games, which floated around the event capturing footage from kayaking to dog jumping. Foley and her team combed through the content and presented a short video produced in both 2D with OverCapture and VR, snippets of which can be seen below. 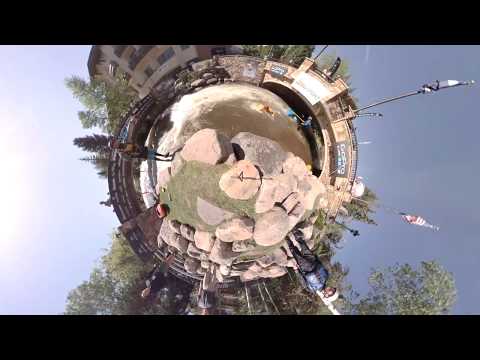 Since OverCapture is in large part a software feature, copycat solutions will undoubtedly make their way to market. But Foley, who keeps a collection of 360-degree cameras at her desk at work, isn't worried. From what she has seen, competing spherical camera makers are nowhere near supporting similar feature sets. In other words, GoPro will own the market when Fusion launches.

Hardware is, of course, a key element in the ultimate success of Fusion and GoPro has put just as much effort into the device as it has in supporting software. For example, each of Fusion's two cameras can compensate for lighting conditions independently, a feature not seen on other spherical cameras. And while GoPro failed to confirm whether Fusion will be waterproof, we saw one unit take on low level rapids in a kayak, while another remained in working order after sitting in a pool for over five minutes.

While we were lucky enough to see the first functional Fusion units operating in the wild, GoPro stayed mum on what's going on beneath the camera's sleek gray exterior. The company was even reluctant to discuss Fusion's offset lenses, one of its most distinguishing features. Foley told us the design facilitates advanced imaging techniques like accurate stitching, but declined to comment further. More information will be revealed when Fusion officially launches later this year.

Foley mused that she could have used couple of Fusions to film her wedding, but guests would have had to sign non-disclosure agreements. She was half joking, but the idea of capturing a live event with just two or three cameras might not be that far from fiction. And with Fusion, that reality is just off the tiny world horizon.