AppleInsider
Posted: July 21, 2017 3:37PM
in Mac Software
Two games are being briefly made available to download for free on Mac, iPhone, and iPad, with the 2013 remake of 'Shadow Warrior' for macOS offered by Humble Bundle at no charge until July 22, while 'Yankai's Triangle' is the free 'App of the Week' in the App Store.

Developed by Flying Wild Hog and published by Devolver Digital, the 2013 remake of "Shadow Warrior" tells the tale of Lo Wang, the corporate shogun of Zilla Enterprises, ordered by his bosses to acquire a legendary blade. After being betrayed, Wang then becomes a reluctant hero, fighting demons released into the world by the weapon and his employer.

While using modern graphics, the game retains the first person shooter gameplay of the original, with traditional melee weapons such as the katana being used alongside an arsenal of guns and other projectile weaponry. Players can also call upon mystical powers for protection, and to cause damage to their enemies.

The Special Edition package offered by Humble Bundle includes bonus content not included in the main game, including a "Serious Sam 3" sledgehammer, a "Hotline Miami" katana, a digital artbook, and the game's soundtrack.

The minimum requirements include OS X 10.9 or later, a 2.4GHz dual-core processor, 2GB of RAM, 15GB of storage, and at least a GeForce 9600, Radeon HD 5870, or Intel HD 4000 graphics with 512MB of dedicated memory. "Shadow Warrior: Special Edition" also requires a Steam account in order to redeem the game, and is also available for Linux and Windows systems.

Last week, GoG made the original game free to download, with "Shadow Warrior: Classic Complete" consisting of the first game along with the Wanton Destruction and Twin Dragon expansions.

Apple has declared puzzle game "Yankai's Triangle" as the App Store's "App of the Week" for this week, with the game now free to download to iOS devices. Developed by Kenny Sun, the game was released in 2016, and tasks players with the deceptively simple task of rotating triangles around to match the side of other nearby triangles.

The game increases the difficulty quickly, as players have to zoom out of the playing field to see the sides of larger, further out triangles, increasing the size of the task. If a player makes an incorrect match closer to the center of the entire puzzle that at first glance appears to be correct, they may find they have to go back into the middle to change the pattern so that it works properly with exterior triangle rings.

"Yankai's Triangle" requires 58.1MB of storage and iOS 8.0 or later, and is compatible with iPhones, iPads, and the iPod touch. The game is currently free to download, but will revert to its normal price of $2.99 at the end of the seven-day period.

Kenny Sun has created a number of other apps for the App Store, with the sequel "Yankai's Peak" requiring players to push pyramids around to solve over 130 levels. 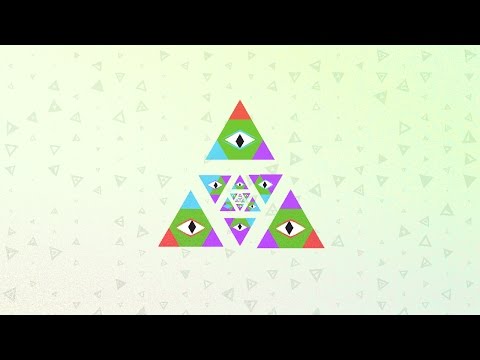