AppleInsider
Posted: August 31, 2017 3:01PM
in iPhone edited September 2017
AppleInsider this week went hands-on with Propel's new limited edition Star Wars elite laser battle drones. These are small, palm-sized quadcopters that blur the line between gaming in the real world and a virtual one, thanks to unique connectivity with Apple's iPhone. 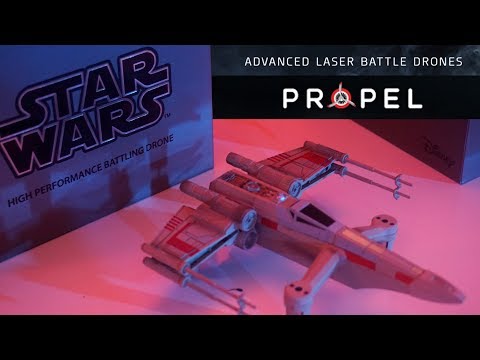 Propel's Star Wars drones different from typical toy drones in a number of ways. For starters, the propellers are actually on the bottom, not the top. This allows for them to look more like flying Star Wars vehicles than a normal quadcopter, especially when the lights are turned down.

Propel, the maker of these drones, did a demonstration for the press in Brooklyn with professional pilots and dim lighting in a smoky room, with classic John Williams songs playing. The result was impressive -- Star Wars geeks are going to love this.

Priced at $179 U.S. and launching on Sept. 1, the limited edition Propel elite Star Wars laser battle drones come in three styles familiar to fans of the franchise: the T-65 X-wing starfighter, Darth Vader's TIE Advanced x1 and a 74-Z speeder bike. They are hand-panted and come in serial numbered collector's boxes that feature with a wax seal, lighted display case, and accompanying music that plays when you open it up.

Propel says these are the first edition in a series of high-performance battle drones that are forthcoming.

While in the air, the drones can shoot at each other with technology that's similar to laser tag, like you used to play when you were a kid. Out of the box they do this through infrared, but there will be actual laser upgrade kits coming later this fall for $40 that you will be able to see in a smoky room.

But the experience really kicks it up a notch when an iPhone or Android device are brought into the mix.

For starters, a new app from Propel, launching on Friday, will allow pilots to train with a virtual drone -- using the drone's actual physical controller, complete with force feedback -- before they actually take their toy to the skies. Propel demonstrated this app to us on Apple's iPad, and the virtual experience did a great job of capturing the physics of flying a drone in the real world.

The flight simulator app features 34 training modes that will allow you to rank up from cadet to admiral.

As pilots level up their skills, they are tracked through a worldwide leaderboard. Once they feel comfortable, they can begin piloting in the real world and doing battle against other drone owners, advancing their rank even further. Even higher ranks will be achievable once the laser upgrade kits launch.

These live air combat games can involve up to 12 people at the same time. For this week's demo in an enclosed, indoor space, we saw six drones do battle at once.

By connecting an iPhone and plugging in headphones, gamers will even be able to hear real-time sound effects and lines of dialogue from Star Wars while combat is underway.

The physical controller connects to an iPhone via Bluetooth, and to the drone via a 2.4GHz wireless frequency. It includes a button for aerial stunts, such as doing a barrel roll to dodge enemy fire.

Propel's new app will also give users the ability to connect with one another, allowing for meetups around the world where strangers can find each other and meet to play. Scores are synced live during a match, and then are then saved to the cloud where players can compare their skills.

The initial demo at this week's event with professional pilots flying and engaging in combat was very impressive.

Propel then let the amateurs take over, as journalists took to the skies in a small enclosed space. It wasn't pretty.

The space battles were chaotic and cramped, and the drones collided with each other regularly -- which is to be expected when no one has flown these before. However, we came away impressed, as none of the quadcopters appeared to sustain serious damage despite repeated crashes.

In our quick viewing, we came away with the impression that these small flying machines are durable -- which parents will undoubtedly be relieved to hear, especially when these small toys can fly at more than 30 miles per hour. Users can also configure multiple speed settings to cater to the pilot's experience level.

Average flight time is rated conservatively at 6 to 8 minutes, and the unit comes with two swappable batteries. That means combat doesn't need to stop after a few rounds.

These will be available Friday, Sept. 1 -- which Disney is branding as "Force Friday." It's all part of promoting a new line of Star Wars toys ahead of the next film, "The Last Jedi," which arrives in theaters in December.

AppleInsider will have much more on the limited edition Propel Star Wars laser battle drones in the coming weeks, including a full review.

B&H Photo is currently accepting orders for all three Propel Star Wars quadcopters for $159.99, a discount of $20 off MSRP. Each drone also qualifies for free expedited shipping to contiguous U.S. addresses with no sales tax collected on orders shipped outside NY and NJ. In addition to B&H, Best Buy also has the Star Wars fighting drones in stock with free store pickup, although sales tax will be collected in all applicable states.