AppleInsider
Posted: November 21, 2017 8:34PM
in General Discussion edited November 2017
The latest drone footage of Apple Park shows what appears to be complete landscaping with a full pond inside the circular headquarters, and has the closest shots of the large atrium doors yet seen.

The video opens with a view of the newly opened visitor's center. It then cuts to a closeup of the massive doors to enter the main "spaceship" building.

All told, the entire campus is much more adorned with plant life than in previous footage, and as expected has progressed in other ways. For instance, the circular pond in the center of the campus is full, with paths up to and around it now complete.

Not all of the campus is as finished as the main buiding. There is still much in the way of construction activity near the fitness center, with terrain sculpting still ongoing. 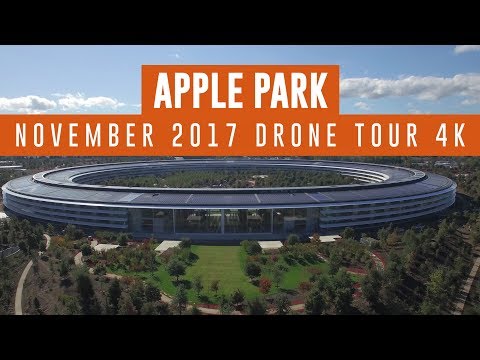 Apple held its first official event in Steve Jobs Theater on Sept. 12 with the unveiling of the iPhone 8, iPhone 8 Plus, and iPhone X.