AppleInsider
Posted: January 9, 2018 7:15PM
in iPhone edited January 2018
At the Las Vegas Consumer Electronics Show, AppleInsider was given a hands on demonstration of how the new Elgato Eve Button, Degree, and Aqua work with HomeKit. 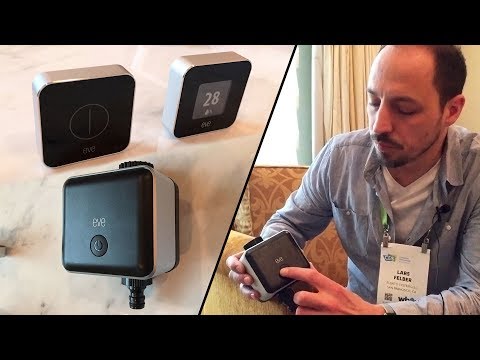 VM: Hi Lars. Thanks for speaking with me.

LF: Thanks for having me.

VM: So, tell me about this button you're holding there.

LF: This is Eve Button, and this is the remote for your connected home. It's very simplistic, and Eve Button supports up to three actions and these actions can control a video device, or a HomeKit scene, so you could control a lamp, like the one that we have here in the back by the window. A single press will turn on the lamp, a double press will turn it off again, and a long press puts it to 50 percent (brightness). These are the actions we assigned to Eve Button, but there is unlimited possibilities for what you can do with it. You can put your Good Morning scene on it, to heat up the espresso maker in the morning and to light up the kitchen and turn the radio on with one press of the button.

VM: And the use for this is if you have someone who doesn't, maybe a guest in your home who's not on your HomeKit network, and isn't familiar with the app.

LF: That is just one scenario. You have people who do not have access to your HomeKit, then you have someone who isn't a big friend of Siri and would like to have a tactile control rather. And then you have may a quiet environment like a baby room where you want to turn the air purifier on without speaking to Siri, or lighting up an iPhone display. Lots of scenarios, lots of use cases, and it looks great so you want to have it around the house, ready for people to use.

VM: Yet, instead of using the gloss white industrial design you had been using, it's more gloss black with an aluminum frame, it's a little more modern.

LF: That is correct, and this is what we've been using for all the latest additions we've added to the Eve family. Introduced that style with the Eve Degree, which was the successor product to Eve Weather, and there is more to come that uses this design.

VM: What else uses that design that's going to be available soon.

LF: Just like the Eve Weather, that got its successor in Eve Degree, we made a second-generation product for Eve Room, our air quality sensor, the indoor sensor, and Eve Room comes in the same type of enclosure with an aluminum frame and chamfered edges, like the ones that the iPad has. And what's new about Eve Room is that there is a display now. It's an e-ink display, very energy efficient, and what you see here is the overview screen that tell you about the air quality. Currently we have four out of five stars here in our suite. Temperature and humidity. And if you are rather interested in just seeing the humidity from everywhere in the room, you can switch between those three screens with those touch sensitive buttons left and right of the display.

VM: And because it's a HomeKit device, you can use it for triggers within other devices and scenes.

LF: Exactly, you could say if the humidity falls below 30 percent, I want to activate an Eve Energy smart plug that is connected to a humidifier and increase the humidity until 45 percent then turn that off. So you can make that in the part of HomeKit automation. A significant change is the sensor we've put in there, it's still a VOC sensor that measures volatile organic compounds, all kinds of hazardous particles in the air, and the new one uses a Sensirion sensor that is even more accurate than the predecessor.

LF: Yep, exactly. So we hope to get that out in March of this year.

VM: Fantastic. Now, there's something else you were going to show me?

LF: Right, iOS 11, as Apple promised at WWDC in 2017 introduced support for irrigation control to Homekit, and Eve Aqua will be one of the first products that makes use of that. So this is an irrigation controller for your garden. Connect it to the faucet and connect the hose here, and you can use HomeKit or even that button on the front to open the valve and close it, and in Apple's Home app you can set the time you want to leave the valve open once the button is clicked or once the button is pressed on the iPhone and iPad. Of course you can use HomeKit to create schedules and water your lawn, once in the morning and once in the evening for, let's say, ten, fifteen minutes.

VM: And the way the Home app responds to this is when you have the duration set, and it's turned on, it shows the duration counting down.

LF: That is right, yeah. There is a countdown that shows you for how long the water will be running. The whole setup is really straightforward. We have the device here, we can go into the details view, and now turn the water on. You heard how the valve was opening, and now it's updating that duration here, we set it to run for five minutes. Now it's counting it down, and after five minutes you would hear the valve close. The same thing would happen if I pressed the button just manually on the device.

VM: The duration gets programmed into the device?

LF: Yeah, exactly. You can set that here. And currently it's five minutes. Water turned off.

VM: Excellent. Well thank you very much Lars, I do appreciate you showing all of these cool products.

LF: Thanks for having me.