AppleInsider
Posted: February 13, 2018 2:56PM
in AAPL Investors
Later this morning, Apple is holding its 42nd annual shareholder meeting at its new Apple Park facilities for the first time, offering some members of the public a glimpse inside its new headquarters. However, this year attending the meeting requires a pre-arranged registration; shareholders of record who simply show up have been put on notice that the event is already at capacity.

Apple's shareholder meeting will be held at the subterranean Steve Jobs Theater where the company last year introduced Apple Watch Series 3, iPhone 8, 8 Plus and the new iPhone X. The new theater is larger than the auditorium in the original Apple Infinite Loop headquarters, but still can't accommodate everyone who might want to attend.

For the first time, the company has noted on its Investor website that "while we appreciate shareholders' interest in attending the meeting, registration has reached capacity and we are not able to accommodate additional requests," adding that, "only shareholders who present valid confirmation of registration from [email protected] will be permitted to enter the Apple Park campus for the meeting on February 13."

In addition to the Steve Jobs Theater itself, the company is also be hosting additional seating for invited attendees within its adjacent facilities in the Phase Two development of Apple Park, new buildings on the edge of the new Apple Park campus designed to host research and development activities.

Apple has held its official shareholder meeting each year in accord with its corporate bylaws as a public company. It involves a brief status report of the company's activities typically delivered by its chief executive Tim Cook, followed by official company business involving the reelection of board members and a consideration of (and vote on) various proposals advanced by either the company's executives or by outside groups representing individual shareholders.

Following the conclusion of all official business, the meeting is typically followed by a question and answer session that allows shareholders to address Cook and other members of Apple's board with their concerns or simply voice their appreciation of the company's performance--with the subject of the questions often reflecting the recent nature of Apple's current stock price movements.

Decades ago, back when Apple was only marginally significant as a consumer tech company in a sea of much larger PC makers, the corporate meetings drew little public interest. However, in the early 2000s as Apple began to rapidly grow and gain stature under Steve Jobs, its shareholder meetings began to attract the attention of various groups seeking to promote themselves.

Apple's popular sales of millions of iPods once drew staged protests and "shareholder proposals" orchestrated by groups such as Greenpeace, which insisted that Apple's consumer electronics were contributing to "toxic ewaste," and used Apple's corporate meetings as a platform to direct attention to their organization and its fundraising efforts, while calling the company "rotten" in grandstanding press releases.

This occured despite Apple's still relatively small share of the global production of computers and media player devices, and despite the fact that iPods and their rechargeable, recyclable batteries had actually dramatically reduced the annual consumption and disposal of tens of millions of single use batteries that formerly powered most portable music players.

A variety of other politically charged corporate issues have similarly attached themselves to Apple's shareholder meetings, including liberal proponents of open public governance and transparency in executive pay; environmental policy, social justice and human rights issues related to Apple's contract factories and its supply chain; and groups seeking to derail Apple's efforts to develop clean energy production and minimize its corporate impact on global climate change, under the conservative argument that a public company shouldn't do anything that doesn't immediately produce an obvious "Return On Investment" to its shareholders.

At one point, Cook delivered a rather scathing reply to one such demand that Apple document the ROI of every activity related to environmental concerns, stating "if you only want me to make things, make decisions that have a clear ROI, then you should get out of the stock."

In 2015, Cook similarly again noted that there was "not a business model" behind Apple's work on health-related efforts including Research Kit and that, "for those looking for an ROI, there's not one."

At the same time, he noted Apple's efforts that did have an obvious business model, including the development of Apple Pay, Apple Watch, Car Play, HomeKit and the Swift programing language. 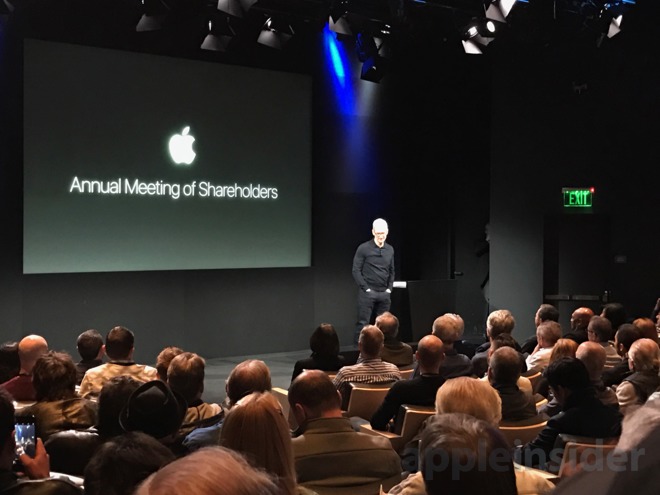 The shrinking session of public comments

Public comments at meetings have occasionally devolved into long-winded personal attacks on individual board members or executives--targeted first at Jobs, then at Cook and public figures who sit on Apple's board, including former American Vice President Al Gore.

Over the years, Apple's executives have worked to proactively address issues and draw attention to the work the company is already doing in various respects related to its global operations, rather than simply suffer through the finger wagging of outside groups seeking to gain headlines for their own causes.

Apple has also dramatically scaled back the amount of time it devotes to public questions and comments. In recent years, Cook has invited public figures--including the Reverend Jesse Jackson--to address issues related to social justice and the strength in diversity and inclusion, leaving little remaining time for public discourse.

That's likely because public comments have commonly either consisted of fawning praise from satisfied fans or ecstatic shareholders or introduced awkward, unscripted questions with the potential to open up media scrutiny into areas Apple's Cook doesn't want to focus any attention.

Ten years ago, however, Jobs seemed to welcome public comment, using questions as an opportunity to address a range of subjects, or, in Jobs' signature fashion, masterfully dodging questions he didn't want to answer by simply talking about things he did want to discuss.

Public questions posed at shareholder meetings actually served as the first real discussion of Apple's internal efforts to reduce or eliminate the use of harmful chemicals, and the standards it had internally developed to protect the workers employed by its partners and even third party suppliers up the chain.

I once asked Jobs and Cook during a shareholder meeting's public comments session why Apple didn't more publicly promote its pioneering, substantial work in supplier responsibility, as was essentially told that the company didn't think it needed to do this, and that its motivation was to do the right thing, rather than gain attention for its actions. Since then, Apple has incrementally outlined to the public more about its internal work in annual Supplier Responsibility reports.

Other public comments that resulted in a better insight into the company's plans included questions posed about whether Apple took the video games industry seriously, and--after the introduction of iPhone in 2007--whether the company was planning to ever open the new device to third party apps development.

At the time, Jobs described various issues involved with deploying an app store while maintaining the security and privacy of its customers, providing a glimpse into the thinking and curation that would later define one of the primary differentiating features of Apple's iOS strategy in contrast to the open, unregulated platforms of Microsoft Windows and Google's Android that didn't give much thought to customers' data privacy, advertising and behavioral tracking, malware threats and other serious problems.

Last year, Cook expressly directed his comments at the meeting aimed at concerns about Pro Macs that had been floating.

"You will see us do more" with Macs and professional software, he told shareholders, noting that creative and pro markets were very important to the company. Since then, Apple introduced its new iMac Pro and Pro Apps updates.

This year, the company is likely to address what it plans to do with foreign cash holdings after paying taxes on the huge holdings under the newly shifted U.S. tax laws.