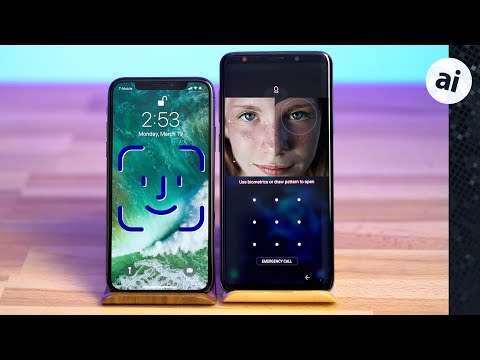 Apple's Face ID was far more secure and reliable, as the Note 8 had issues when holding the phone at an angle. Samsung's Face Recognition failed to work in the dark, and would unlock even when a user's eyes were closed, posing a potential security risk. Samsung also included a fingerprint sensor in the Note 8, but the component was placed in a poor location.

This year, Samsung rolled its Face Recognition and Iris Scanning technologies into a single feature called Intelligent Scan. To see if the Korean tech giant has caught up to Apple, we put the S9+ through the paces in a side-by-side comparison with iPhone X.

Right off the bat, Samsung presents a disclaimer when registering your face and irises for the first time, saying iris scanning can damage the eyesight of infants could cause problems in adults. A bit worrying for a consumer device intended for daily use. A quick look online shows a number of users complaining about eye strain when using the feature.

One thing we noticed is that Intelligent Scan is not yet able to authenticate Samsung Pay purchases. Apple on the other hand, is so confident in Face ID, that you can use it to unlock your phone, automatically bring up login credentials, make purchases with Apple Pay, iTunes, and App store, and you can even use it to unlock very sensitive and private apps like the Bank of America banking app and Paypal.

Starting with a basic speed test, the S9+ definitely beats iPhone X in delivering a user to the home screen. Apple's iPhone requires users swipe up to reach the home screen after Face ID authentication, an extra step that takes time. Samsung gives you the option to go straight to your home screen when using Intelligent Scan.

In a range test, we held the phones at arms length. Face ID worked every single time. On the S9+, sometimes it would work instantly, but other times it prompted us to bring the phone closer to our face. Laying both phones flat on a table at an angle away from the user's face, the iPhone X was able to unlock on the first attempt, whereas the S9+ asked to hold it upright in order to unlock. Performing the same test at waist level yielded similar results.

As expected, neither phone would unlock using a selfie.

Putting on a regular pair of glasses, we instantly noticed that the angle at which Intelligent Scan worked was now limited. The phone needed to be at eye level to get it to consistently unlock. However, as soon as the glasses were raised, it would unlock instantly. Meanwhile, the iPhone X worked like a charm, every time.

For our final test, we turned the lights off and lowered the brightness on each phone to the minimum setting. The iPhone X worked perfectly every single time, but the S9+ was again limited by its scan angle. We also noticed that the S9+ would gradually raise its brightness before unlocking.

So which facial authentication system is better? Intelligent Scan definitely fixed some issues by combining both authentication methods together, but it's still not as good as iPhone X's solution. Face ID just works, and much more reliably.

The cherry on top is the fact that you can't use Samsung Pay with Intelligent Scan, suggesting even Samsung doesn't fully trust its own security.